Samsung is releasing a hotfix update for the third Galaxy S8 and Galaxy S8+ Android 8.0 Oreo beta to fix a serious issue that was preventing apps from opening. The app power monitor feature that comes built-in on Samsung’s software puts apps unused for more than three days to sleep, and while this is supposed to improve battery life, it was also preventing apps put to sleep from opening again in the latest beta firmware.

With the hotfix update, that should no longer be a problem. You can get the update by going into the Settings » Software update menu and selecting the Download updates manually option. There’s nothing else on offer with this update other than the fix for the aforementioned issue, so for any other fixes and new features, we will probably have to wait for the next beta. We’re also unclear if the hotfix update is rolling out only in the UK, but we’ll update this story once we’re able to confirm (feel free to drop a comment if you’re getting this hotfix outside the UK).

Hopefully, the next beta will be accompanied by the second phase of the program, which will expand the beta’s availability to Germany, Spain, France, Poland, China, and India. The second phase will also bring us much closer to the official release of the Android 8.0 Oreo update, although it seems unlikely the final update will arrive anytime before next year. 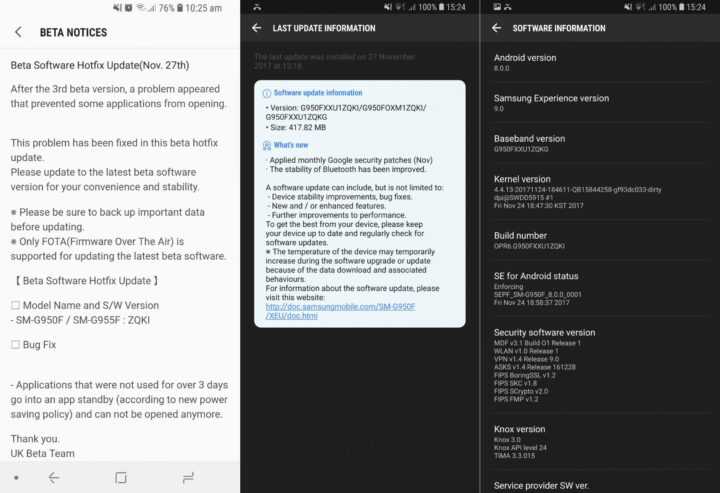 Don't miss Here’s a list of all the new features Android 8.0 Oreo brings to your Galaxy smartphone
Join the Discussion