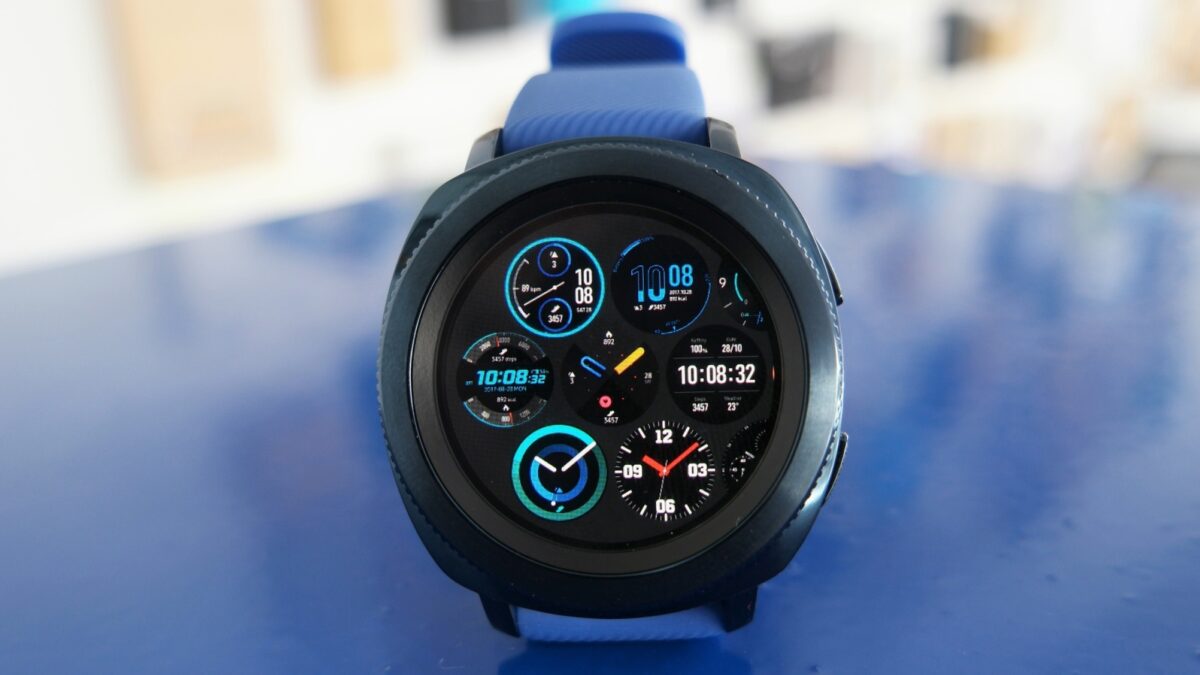 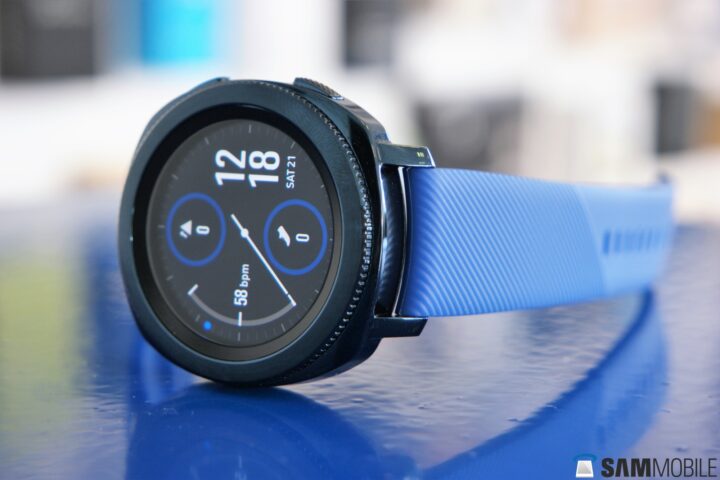 What does help in that regard is the size of the Gear Sport. It’s about the same size as the Gear S2; it’s not bulky and, therefore, excellent for those frantic bouts of activity, and it looks better on small wrists compared to the Gear S3 from last year. Samsung has also improved the accuracy of the heart rate sensor simply by having it protrude by 1 mm compared to the rest of the body. This doesn’t mean you will feel the sensor on your skin while you’re wearing the watch, but it should allow for more accurate heart rate monitoring.

Out of the box, the Gear Sport comes attached with a large band, with a smaller one for those with small wrists included as an add-on. You can use any watch band just like you could with the Gear S3, as Samsung is using a standard 20 mm band. However, I’m not down with the fact that the Gear Sport doesn’t come with a speaker (or a variant with LTE connectivity). The Gear S3 had one, and it’s disappointing to see such a useful feature was removed.

Now, about that blue color. Well, color preferences are a subjective matter, and what works for you might not work for others. But to me, the blue variant isn’t a great look for men, and rose gold would be a better fit for the ladies. There’s a black variant of the Sport as well, but that’s about it, meaning color options are quite limited, at least for now. 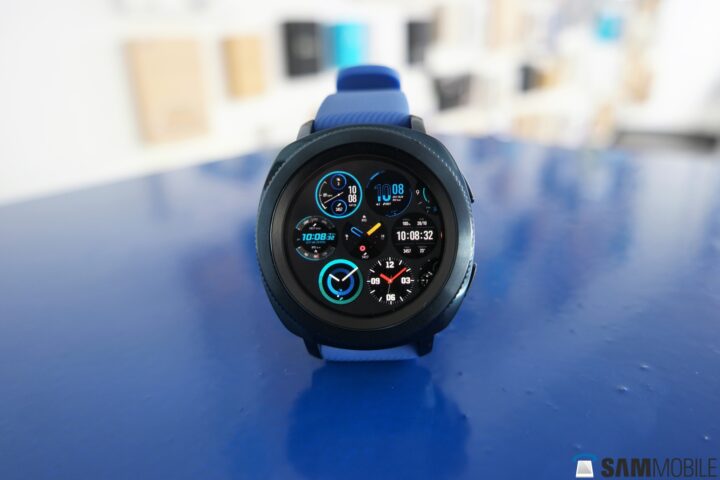 The Gear Sport features a circular 1.2-inch (30.2 mm) Super AMOLED display, the same size as the Gear S2’s. With a resolution of 360×360 pixels, it’s not “Retina” sharp, but that doesn’t mean it detracts from the experience. The display looks great both indoors and outdoors, and the only issue here is that the display is rather small. This might not sit well with some users, but then again, that bezel ring continues to be very useful and reduces the need to use the touchscreen for getting around. The more portable form factor means the smaller screen size was a necessary sacrifice, and overall, there’s nothing to complain about when it comes to the Gear Sport’s display. 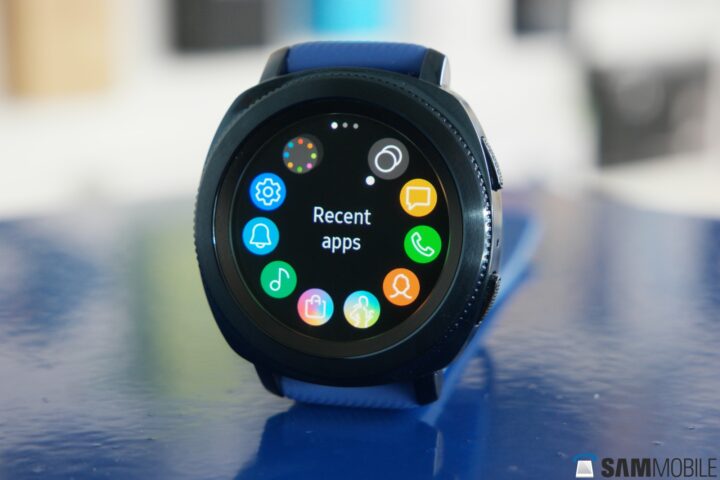 Like any other modern Samsung smartwatch, the Gear Sport runs on the company’s Tizen OS, version 3.0 to be specific. To put it simply, Tizen is the best smartwatch OS right now. It’s easy and fun to use (thanks to that bezel ring) and looks rather sophisticated. Tizen 3.0 also comes with a few new features, including the option to wake the watch up with the bezel ring, better previews when browsing watch faces, and a Watch only mode, which lets you extend battery life (up to 20 days and more!) by disabling all features and making the watch only show the time. To know more about the new features on Tizen 3.0, check out this post. 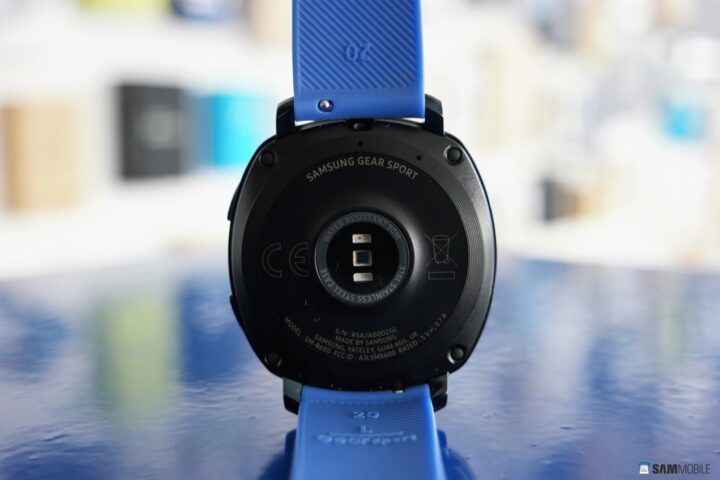 It’s been made abundantly clear that the Gear Sport is a smartwatch focused on fitness and sporty endeavors and comes installed with Samsung’s Health app. There’s support for tracking quite a few exercises: running, walking, cycling, squats, pilates, yoga, star jumps, lunges, and more. I tried the Gear Sport with a few exercises during the test period, and overall, the tracking seems to be pretty accurate. I just don’t like it that weight training exercises aren’t supported, though Samsung can add those with a software update in the future.

You also get sleep and heart rate tracking, but the headline feature is that you can take the Gear Sport for a swim. Samsung tells us the Gear Sport has “a water resistance of 50 meters under the ISO standard 22810:2010.” According to the company, it’s not suited to diving or high-pressure water activities. That is to say it’s meant to be used for your regular swi, but it’s still a feature that separates the Gear Sport from the pack.

For tracking your swimming activity, Samsung has paired up with Speedo, a maker of swimming accessories. Of course, you can also download new apps from the Galaxy Apps store, although the quality of those apps still leaves something to be desired as Tizen isn’t too popular with developers. Thankfully, battery life remains a major highlight compared to Samsung’s competition. Tizen smartwatches have always lasted long, and the Gear Sport manages to last around two days on a full charge with its 300 mAh battery. 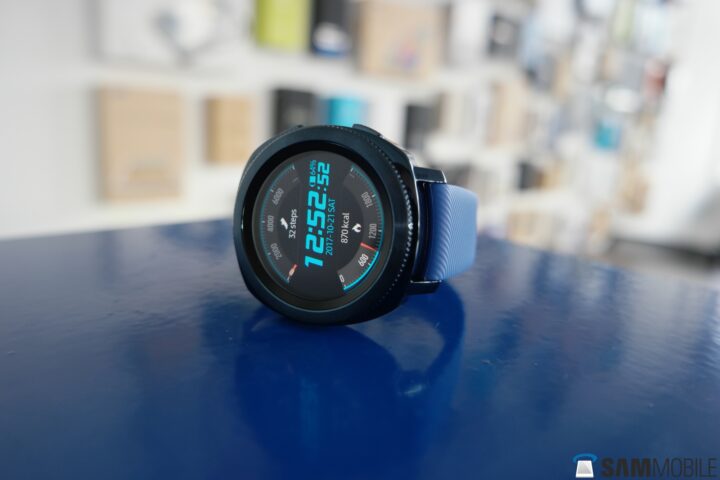 The Gear Sport is a good follow-up to the Gear S2 Sport, but it doesn’t feel like a next-generation device compared to the Gear S3. Not having a speaker (or LTE connectivity) and not having MST support (meaning you can’t use it for payments via Samsung Pay on non-NFC terminals) feel like downgrades. You can take the Sport for a swim, but that’s not enough to justify spending my hard-earned money.

The Tizen user interface for watches and its battery life continue to be good, but the same can’t be said about the number of available apps on the Galaxy Apps store. Samsung isn’t investing enough into the Tizen platform to make the available apps as refined as it should be, and that’s a shame. Not that Samsung can even do anything unless developers get interested, which is also tough given how Tizen isn’t as popular as Apple or Google’s operating systems.

So, is the Gear Sport worth buying? Well, it sure is if you don’t have a smartwatch and are into fitness and activity, but not otherwise. It’s not like the Gear Sport isn’t good for daily use, but as the latest in Samsung’s smartwatch line, it just doesn’t have that much going for it unless you’re a fitness freak.