Should you watch Netflix using your Gear VR? Probably not

Chances are you’ve experienced Netflix at least once in your life, but it’s unlikely it was through a Gear VR—and take it from us, that’s probably a good thing. We’ve been playing around with the client for the past week to fill you in on the good, the bad and the ugly.

Let’s not beat around the bush: Netflix for the Gear VR is plagued with inconvenience the second you open the application. Instead of using the accompanying Controller to input your account details, you need to select each letter by moving your head.

It’s a good thing the backspace button is huge, because you’re bound to make a ton of mistakes.

I’m not kidding here. While entering my email address and password, with my chin rested on my hand, I must have made at least ten mistakes, caused by moving ever so slightly after tapping the Controller to select a letter.

It would be much better if the application let you enter your credentials using your smartphone’s keyboard before popping it into the Gear VR, then maybe—just maybe—you wouldn’t start the experience feeling frustrated.

Once you’ve signed in, you’ll find yourself sitting on a red sofa with panoramic views of snow-topped mountains to the left, upmarket decor to the right and a giant TV screen in front of you. It’s the plushest setting imaginable to Netflix and…erm…(not) chill. 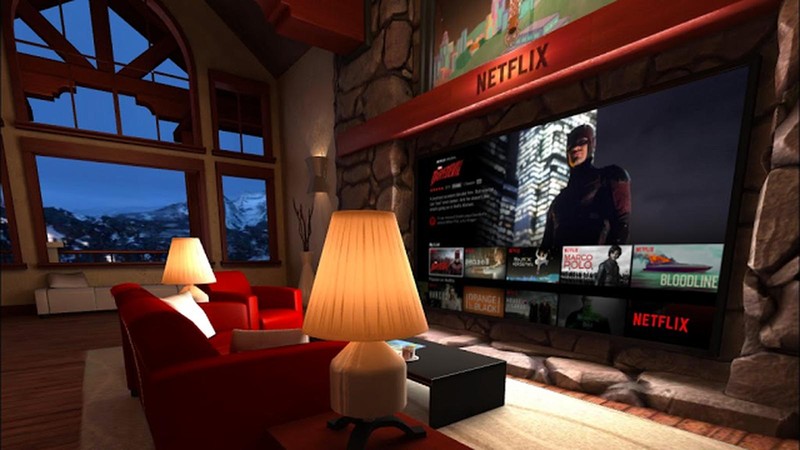 The interface is not dissimilar to what you’d find on a Smart TV; select your profile, choose a show, then you’re good to go. I decided to watch a couple of episodes of Narcos. It felt a little unnatural at first, but within a few minutes I was immersed in my own virtual world.

After around half an hour, however, the headset felt quite uncomfortable and my eyes were strained. Naturally, I began to question whether I’d set my Gear VR up correctly, so I asked my friends if they’d had the same experience. They had and advised me to take a short break.

If you like to binge-watch your favorite shows, Netflix for the Gear VR is definitely not for you.

I’m not sure about you, but having to take a break after watching half an hour of an hour-long show isn’t exactly ideal. If you’re anything like me—and this happened on more than one occasion—you’ll forget what’s happened by the time you pick your Gear VR back up.

That’s about all there is to say about Netflix for the Gear VR. It isn’t a terrible experience, but it’s far from ideal. If you do decide to give it a go, best remember to plug in a pair of earphones. One-sided audio is the devil’s work.