We have heard a lot of rumors and reports about Samsung’s new flip phone so far. The handset is referred to by its model number, SM-G9298. It’s not known right now what Samsung will end up calling it.

Samsung hasn’t confirmed so far when it’s going to unveil this handset. If a new leak out of China is believed, it appears that the announcement will be made on August 3.

The leaked poster comes from Twitter user @mmddj_china who has a good track record in such matters. Samsung will conduct a press briefing in Beijing, China on August 3, according to the poster.

Samsung’s new flip phone is expected to feature a Qualcomm Snapdragon 821 processor with 4GB RAM and 64GB of storage. Additional specs include a 12-megapixel rear and 5-megapixel front camera. Samsung Pay, wireless charging and a 2,300mAh may also be onboard.

The images that have been leaked so far show that the handset has a 4.2-inch external and internal display. How well the 2,300mAh battery will be able to meet their power requirement remains to be seen.

Samsung will reveal more information about this device on August 3. 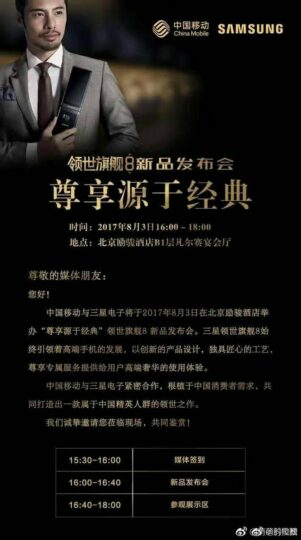