Last month, we reported that Samsung may be working on a successor to its high-end W2017 clamshell smartphone, and now the handset, which carries the model number SM-G9298, has been spotted in a manual that was prematurely published on the firm’s website.

Unfortunately, the bulk of the material is written in Chinese, but from what we can tell the device will come with NFC, S Health, Samsung Pay, S Voice and wireless charging capabilities. It should also sport two 4.2-inch Super AMOLED screens, a Snapdragon 821AB CPU and 4GB of RAM.

As we said when the unit was spotted on TENAA’s online database back in August, it’s a pretty minor upgrade from its alleged predecessor, with the main difference being a souped-up processor, which has led many to believe that it’s a revamped model of the W2017 for the European market.

Read more: Is this Samsung’s new flip phone for China?

There’s still no way to tell whether that’s the case, but demand for Android clamshell smartphones in the region certainly isn’t as high as it is in China and seeing is the manual is scribed in Chinese, it seems unlikely that it’ll ever leave the People’s Republic (unless it’s headed to South Korea). 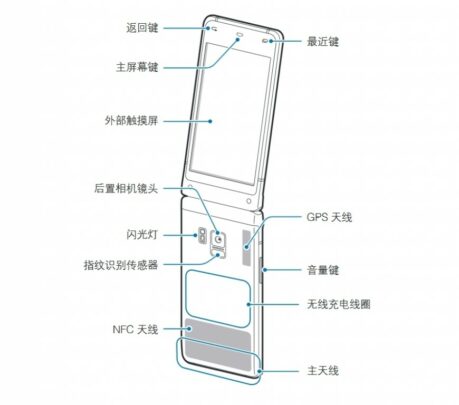 [Poll Results!] Do you want flip phones to come back?