Hands-on with the Samsung Galaxy Book: a new chapter for the ‘tablet PC’ Early last year, Samsung unveiled the Galaxy TabPro S at CES 2016. This 2-in-1 tablet was a premium 12-inch tablet sporting a 6th Gen. Intel Core M processor and running the full version of Microsoft Windows 10. This was the first Windows 10 tablet with a Super AMOLED display on the market, and Samsung’s first Microsoft Surface competitor. It was also the first with LTE Cat 6 support to run Microsoft’s latest desktop operating system.

This year, Samsung is releasing a successor to the Galaxy TabPro S, in the form of the Galaxy Book (which comes in two sizes, 10.6-inch, and 12-inch). While the predecessor was a good introduction for Samsung in this rather specific market, one of the major complaints was the weak keyboard: the keyboard pitch (the distance between the keys) was almost non-existent, and the keyboard stroke (key travel) was also way too little for typing comfortably.

The Samsung Galaxy Book caters to productive on-the-go professionals who are looking for a powerful computing device that isn’t tied to the desktop, that is lightweight and has a versatile form factor, and can easily transform from a tablet into a notebook. We had some time to check out the Galaxy Book before Samsung’s MWC event, and you can read ahead for our hands-on experience with the Windows tablet-cum-PC. 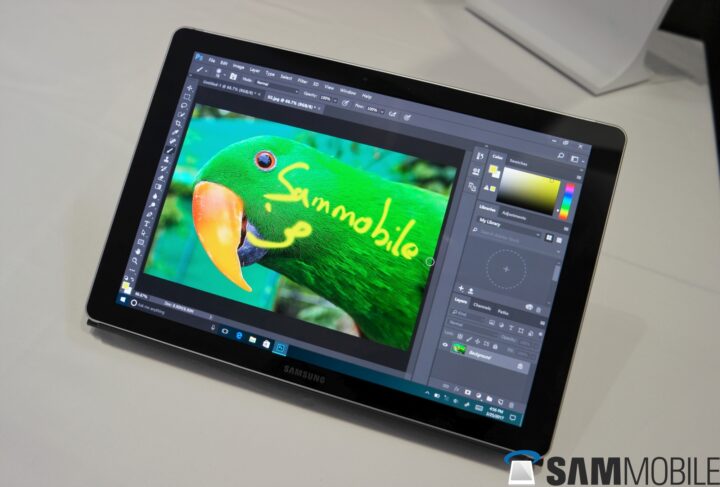 The Galaxy Book features the Galaxy design identity and is focused on mobile productivity. It comes with an enhanced S Pen (included in the package) and is 8.9mm thick and 640g heavy for the 10.6-inch variant and 7.4mm and 754g for the 12-inch variant. The front of the device is black (glass), while the back of the device is silver (metal). The 10.6-inch variant has an LCD display with Full HD resolution, while the 12-inch version gets a Super AMOLED panel with a resolution of 2160×1440 pixel. Naturally, the latter is more attractive, as far as a great viewing experience is concerned.

The enhanced S Pen is highly pressure sensitive (4096 levels) and is the first pen on Windows to support tilting, useful in programs likeAutodesk Sketchbook and Adobe Photoshop. It works without a battery and the 0.7mm pen tip isn’t made of plastic, but a special type of rubber to mimic the feeling of a real pen.

The Galaxy Book comes with an included keyboard cover, either in black or white. This keyboard cover is connected via the magnetic connector on the bottom side of the device. This connector provides both connectivity (so no Bluetooth or NFC) and power (so no charging needed for the keyboard). The keyboard has 1.5mm stroke (key travel), which is a huge improvement over previous tablet keyboards and also the keyboard pitch (distance between the keys) has been enlarged to make the typing experience a lot more pleasant.

As expected, the Galaxy Book is packed to the brim with important connectivity features. There’s Wi-Fi ac, Bluetooth 4.1, LTE, and GPS. The 30.4 and 39.04W batteries provide 10 and 10.5 hours of battery life respectively, with support for fast charging over the USB Type-C ports. Speaking of Type-C ports, there are two on the 12-inch model and just one on its smaller sibling, allowing you to connect external displays and other accessories.

The Galaxy Book can be easily considered a new chapter for the 2-in-1 PC market. Neither version comes with an iris scanner or fingerprint sensor, which we think is a missed opportunity, especially since the Book is focused on the enterprise. It can be made up for by support for Samsung Flow, which lets you authenticate on the PC using the paired smartphone’s iris or fingerprint sensor, but it’s not exactly a great solution.

The 10.6-inch model also has a rather weak processor (it’s newer than the one on the TabPro S, but still comparable in most ways) and the TFT screen is a letdown. While these might be better for battery life, it would be a better idea to buy the Galaxy Tab S3 instead, at least if entertainment is your main concern. The 10.6-inch model is a reasonable entry in the 2-in-1 Windows tablet market, but it isn’t waterproof (a feature Samsung really should bring forward to its tablet lineup) and the keyboard is almost identical to the one for the Tab S3, so it all comes down to what you would use it for.

The 12-inch Galaxy Book has a more decent processor, but Samsung is limiting its appeal by not offering an option with a Core i7 processor for higher performance. A Core i3 model would also be a nice addition for those who prefer battery life over out-and-out performance, even though the Core i5 offers a balance between performance and efficiency. Oh, and 512GB of storage and 16GB of RAM on one of the models would have sweetened the deal further, given the tablet is targeted at professional users.

Despite the oversights, we think Samsung has done a good job with the successor to the Galaxy TabPro S. The 12-inch model is the true successor here thanks to its AMOLED display. The keyboard improvements and S Pen do make both models of the Galaxy Book attractive options, however. As a competitor to the Microsoft Surface, the Galaxy Book certainly stands out, and it would be great to see how it does in the market once it goes on sale.

What’s your take on the Galaxy Book? Impressed by what you see, or do you think Samsung could have done more? Let us know your opinion in the comments, and by leaving a vote in this poll!