As per the information, the Galaxy S8 Plus would feature a 6.2-inch (full rectangle)/6.1-inch (rounded corners) QHD+ Super AMOLED display, a 12-megapixel rear-facing camera with dual-pixel autofocus, and an 8-megapixel front-facing camera. The phone would feature 4GB RAM, 64GB internal storage, a microSD card slot, and IP68 certification for dust and water resistance. It would also come equipped with an iris scanner along with the Knox security suite and Samsung Pay. There’s also mention of 4G LTE connectivity, wireless charging, and earphones that are tuned by AKG (Harman) in the tweet.

The phone would probably use the new Exynos 8895 octa-core processor which was announced earlier today, featuring Samsung’s second-generation CPU cores, Mali-G71 MP20 GPU, and an integrated 4G LTE modem with up to 1Gbps download speeds. No matter how accurate @evleaks’ track record has been in the past, you should take this information with a pinch of salt and wait till the official unveiling of the Galaxy S8 and the Galaxy S8 Plus before you start believing on the information. What do you think about these specifications? 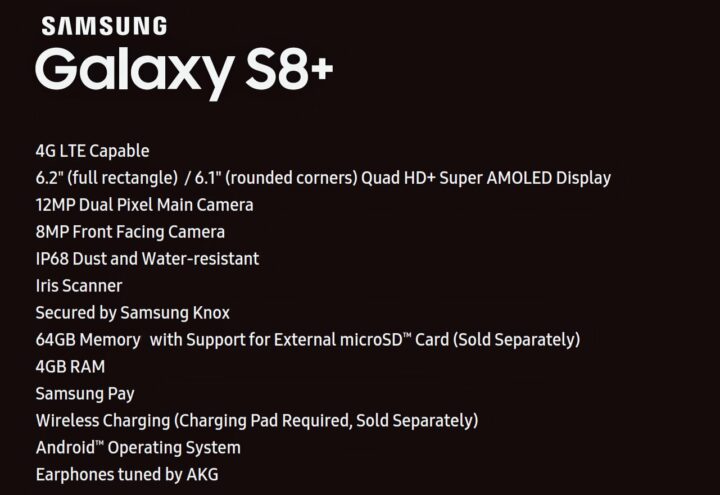