Apple edged past Samsung during the fourth quarter of 2016 in the global smartphone market. According to a report from Strategy Analytics, Apple captured a market share of 17.8 percent, while Samsung captured 17.7 percent share of the market. Chinese smartphone vendors Huawei (10.2%), Oppo (6.7%), and Vivo (5.8%) stood third, fourth, and fifth, respectively.

Samsung shipped 77.5 million smartphones worldwide during Q4 2016, which is a dip of 5 percent annually from 81.3 million units in the fourth quarter of 2015. This dip was mostly due to the Galaxy Note 7 fiasco, and Apple took advantage of the situation pretty well. It sold 78.3 million iPhones worldwide, edging past Samsung. Despite a 3 percent rise in global smartphone shipments, Samsung and Apple collectively shipped 26.4 million fewer units.

Samsung sold 309.4 million smartphones in 2016, capturing a 20.8 percent market share for the full year. This is the South Korean smartphone giant’s lowest market share since 2011. The company will now be banking on the upcoming Galaxy S8 for a rebound. Apple had a market share of 14.5 percent in 2016, thanks to impressive iPhone 7 sales. 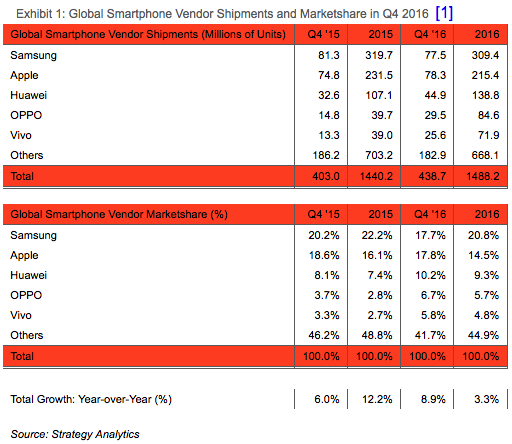