Samsung is yet to announce a 4TB 850 EVO SSD but it appears that this SSD may be out soon. It’s already listed for sale on Adorama which is one of the largest photography and video retailers in the world. It’s the only online retailer that’s listed the 4TB 850 EVO SSD so far, even though an official announcement has not yet been made a revised EVO 850 data sheet from May 2016 does mention the 4TB model so it won’t be surprising when it’s released in the near future.

This 4TB SSD utilizes 3D TLC (3 bit) V-NAND with a maximum speed of 98,000/90,000 4K random read and write IOPS as well as up to 540/520 MBps of sequential read and write throughput. The big selling point here is the fact that Samsung has been able to cram in 4TB of capacity in the standard 2.5-inch form factor with just 7mm thickness. Attempts to purchase the SSD don’t go through as Adorama says that the SSD is on back order but it’s likely that Samsung will provide information about the release soon. The 4TB Samsung 850 EVO SSD is priced at $1,499. 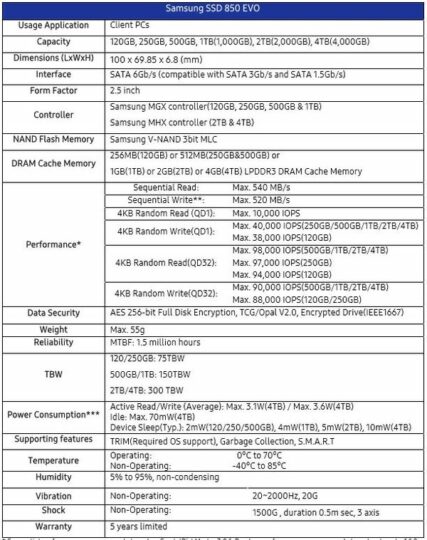