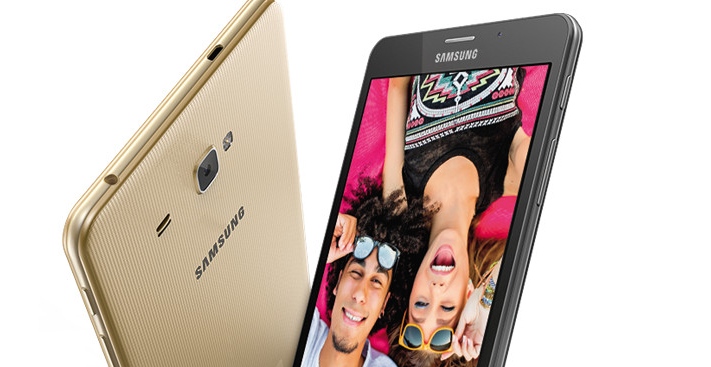 Yesterday, we reported that Samsung was working on a 7-inch smartphone called the Galaxy J Max, and, lo and behold, 24-hours later it has announced the device in India. Judging by the renders, the handset follows the same design language as the Galaxy J1, Galaxy J2, Galaxy J3, Galaxy J5 and Galaxy J7 , with a flash, camera module and loudspeaker positioned in a row on the textured faux metal backplate, and a home button, together with two capacitive keys, located on the front.

Under the hood, you’ll find a 7-inch WXGA TFT display with a resolution of 1280 x 800 pixels, a 1.5GHz quad-core processor, 1.5GB of RAM, 16GB of internal storage (expandable up to 200GB via microSD), an 8MP rear-facing camera complete with Optical Image Stabilization (OIS), a 2MP selfie shooter and a 4,000mAh battery that Samsung promises can last for up to 9-hours of continuous use. It also has compatibility for 4G LTE and supports two SIMs.

The Galaxy J Max ships running Android 5.1.1 Lollipop skinned with the latest version the South Korean company’s TouchWiz user interface. The handset is, of course, pre-loaded with the standard suite of stock applications and services you’d expect to find bundled on any of Samsung’s budget-friendly smartphones, including Ultra Data Saving Mode (UDS), which is powered by Opera Max, and the brand new S Bike Mode that made its debut for the Galaxy J lineup three months ago.

With regards to pricing and availability, the Galaxy J Max is available in either Black or Gold and carries a price tag of Rs. 13400 ($200). Unfortunately, we don’t have a specific release date at this precise moment in time, but recent rumors point towards it hitting the shelves in India as soon as the last week of July. It’s also worth noting that the device will come with a six-month double data offer for Airtel worth up to Rs. 4,500 ($65), so if you’re thinking about picking up a new smartphone, that’s certainly something to bear in mind.