It has only been about six months since the Galaxy J5 was released but from the looks of it, the successor is already in the pipeline. We reported about a week ago that the Galaxy J5 (2016) is being tested at Samsung’s R&D facilities in India and now the handset as appeared on GFXBench, reiterating some details about this device that previously surfaced online and revealing some more.

The benchmark shows that SM-J510x, the Galaxy J5 (2016), has a larger 5.2-inch display with the same 1280 x 720 pixel resolution of its predecessor. There appears to be a 1.2GHz quad-core Snapdragon 410 processor under the hood with 2GB RAM, 16GB internal storage, a 13-megapixel rear and 5-megapixel front camera. The handset will be powered by Android 5.1.1 Lollipop. It can’t really be said for sure right now when Samsung is going to formally launch the Galaxy J5 (2016) so if you’re in the market for a robust mid-range device perhaps you should check out Samsung’s recently revamped Galaxy A (2016) series. 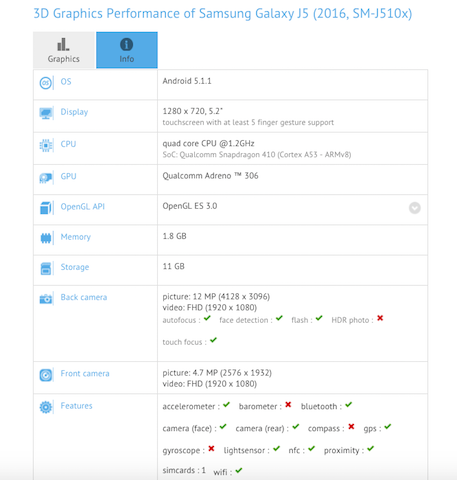