Samsung introduced the Galaxy Tab Active at IFA 2014 in Berlin, Germany. The announcement was rather quite as the device didn’t receive a single mention at the company’s big UNPACKED 2014 Episode 2 event where it launched the Galaxy Note 4, Galaxy Note Edge, Gear S and the Gear VR. However, Samsung did let us play with the device for a few minutes, so read on for hands-on experience

With the Tab Active, Samsung is targeting the enterprise user, and after interviewing 25 Fortune 500 companies, it discovered that companies want a device which is inexpensive, isn’t bulky and heavy, and doesn’t incorporate yesterday’s technologies. And that’s exactly what the Galaxy Tab Active is.

Design-wise, the tablet is very similar to the Galaxy S5 Active – it’s like Samsung simply enlarged the GS5 Active and swapped out the stunning 5.1-inch Full HD (1920×1080) Super AMOLED panel with an 8-inch low-res (1280×800) TFT LCD display. Even though the resolution is pretty low, the display panel itself is not bad at all. As you would expect from a Samsung device, the tablet is constructed out of plastic. Though the design language has taken a huge leap in the right direction with the Galaxy Alpha and the Note 4, the Tab Active is unfortunately still from the old era in this regard. 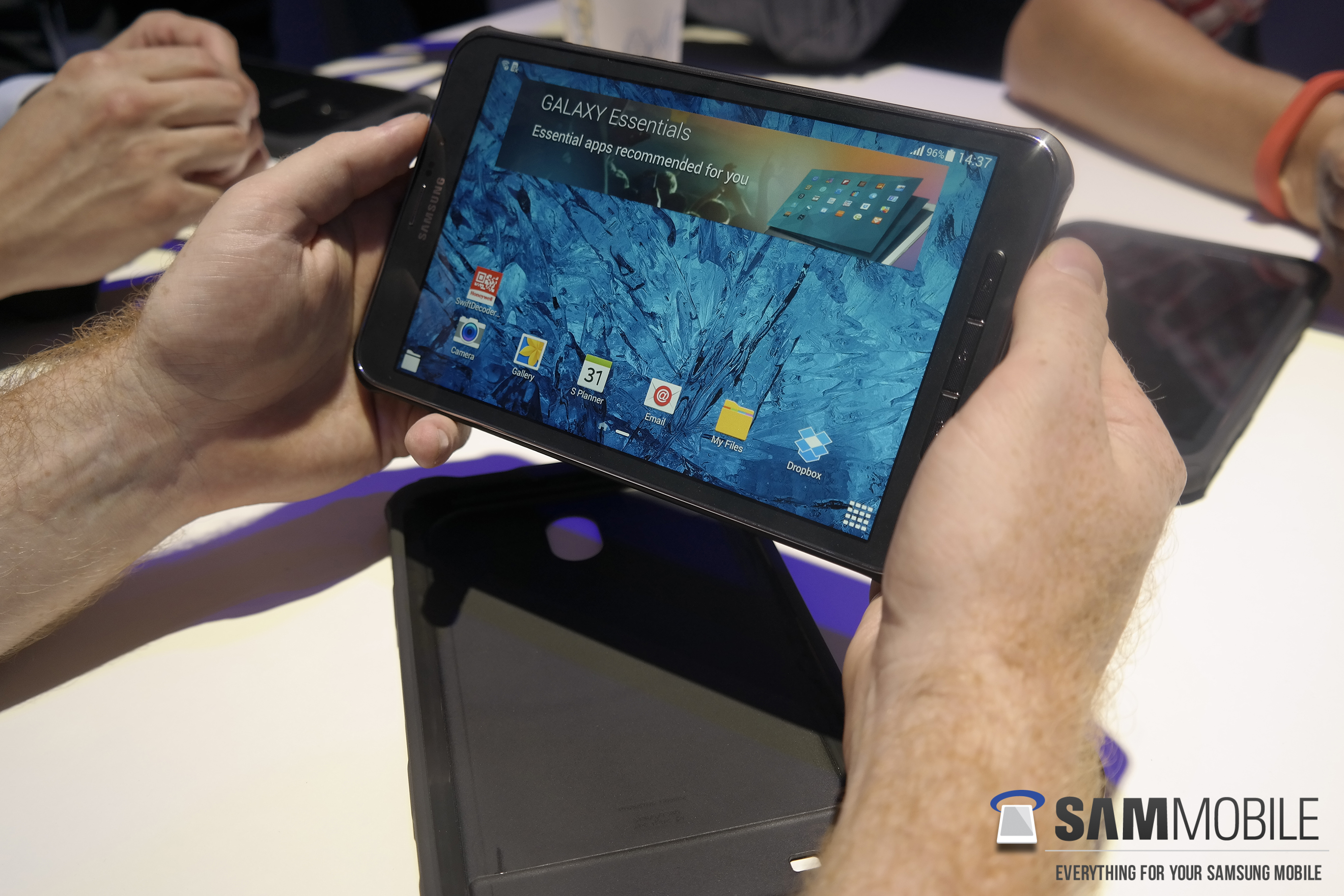 Samsung’s latest enterprise solution is also built like a tank! It sports IP67 water and dust protection, and the best part is that there is no flap covering the microUSB port, just like on the Galaxy S5 Mini. The device is also MIL-STD 810G compliant and Samsung has already offered it to the U.S. military. Samsung has also developed a new Anti-Shock Cover for the device, which it will be shipping with each unit. The cover provides extra shock protection, and at the same time adds a bit of bulk to the device as well. However, the cover does come with its perks; for example, with the protective cover on, the Galaxy Tab Active is able to withstand a 1.2-metre drop, and the cover also holds Samsung’s robust C-Pen (stylus). Now, just to let everyone know, the C-Pen is no S-Pen, so don’t expect to create any wonders with it. It’s just an ordinary capacitive stylus.

Now let’s talk about the performance. On paper, the Galaxy Tab Active is not a powerhouse, simply because it doesn’t have to be one. So, we weren’t expecting much performance out of the tablet, but we were shocked by the results. The tablet performed very well, the transitions were smooth and there was less to no lag whatsoever. It looks like Samsung has finally started optimising its software properly. However, we weren’t able to conduct extensive tests on the Tab Active, due to the short amount of time we had with the device.

Samsung has equipped the device with a 1.2GHz quad-core processor – exact specifications of the SoC are unknown at the moment – 1.5GB of LPDDR3 RAM and 16GB of internal storage which is user expandable via a microSD card up to 64GB. A 3.1-megapixel camera sensor and an LED flash is present on the back, and there is also a 1.2- megapixel front facing camera for video calls and selfies. The camera quality itself is average, but Samsung says enterprise users won’t be using it for the quality but for productivity (like scanning barcode scanners.)

In terms of connectivity, the Galaxy Tab Active features Wi-Fi 802.11n, hexa-band LTE, NFC, GPS, GLONASS, WiFi Direct, Bluetooth 4.0 BLE / ANT+ and microUSB 2.0 port for syncing and charging the device. Unlike other Samsung devices, the device isn’t packed with a ton of sensors and only comes with an accelerometer and a light sensor. 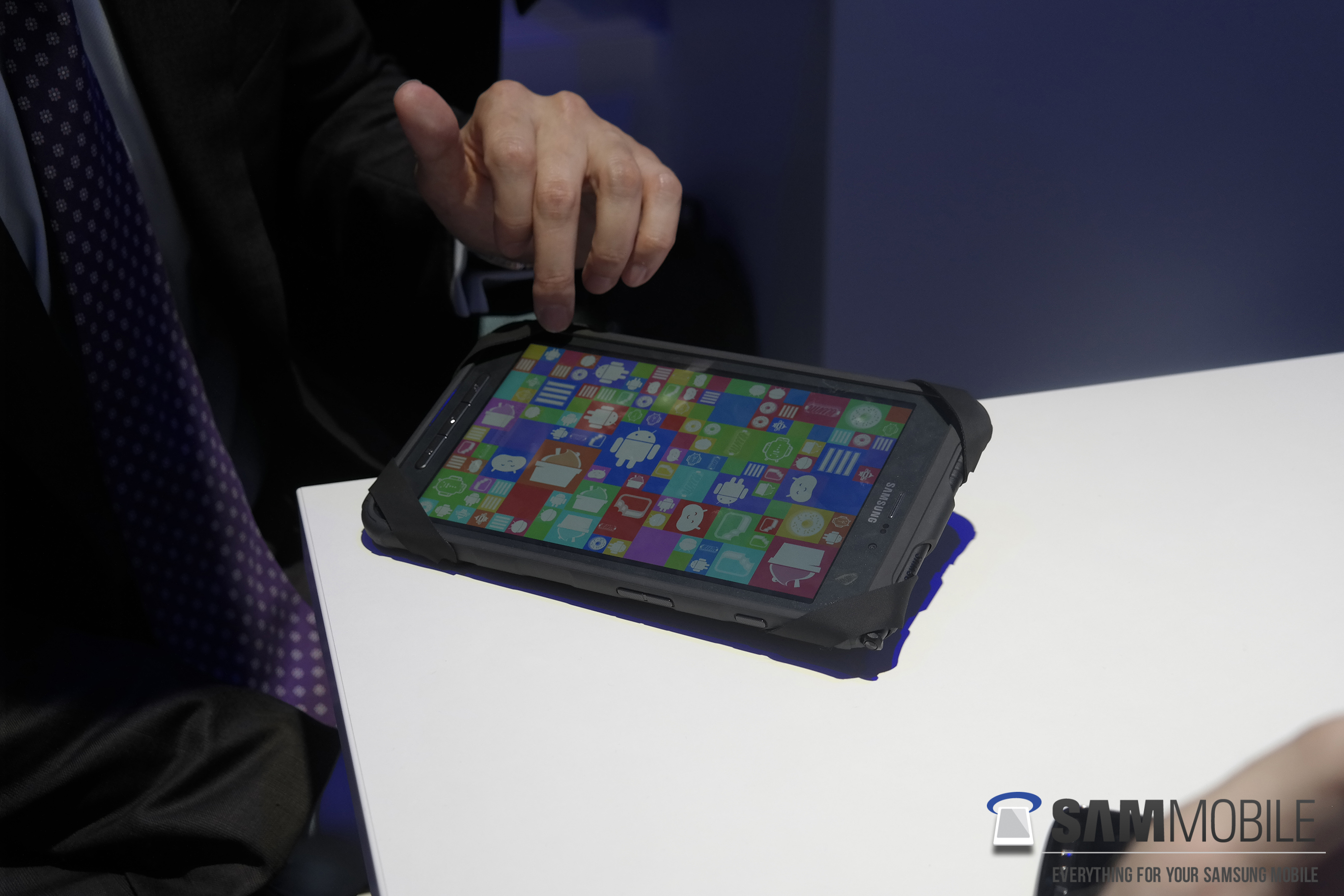 Out of the box, the device comes with Android 4.4.4 KitKat and Samsung’s latest TouchWiz UX. The Tab Active is Citrix ready, SAP-certified, comes with Samsung KNOX built-in, and the Korean giant has also partnered up with Oracle and ECOM. Samsung’s own features like Smart Tutor and Ultra Power Saving mode are also present on the device.

To power all the technology inside the Galaxy Tab Active, there is a 4,450mAh lithium-ion battery, which is also user replaceable – a first for a Samsung tablet. Dimension-wise, the Tab Active comes in at 126.1 x 212.9 x 9.75 mm and weighs 388 grams, and 393 grams with the Anti-Shock cover on. The tablet will be arriving in Q4 of this year and Samsung will also be offering a 3-year Samsung Mobile Care warranty for the device.

Looking for a new tablet, but aren’t too fussed about having the latest specifications? If so, we have a …

Samsung Australia said that the ruggedized Galaxy Tab Active would launch at the end of 2014, after unveiling …

Samsung’s Galaxy Tab Active is coming to India, but it won’ …

Today at the annual and ongoing Samsung Forum event in Thailand, Samsung announced that the company would be b …