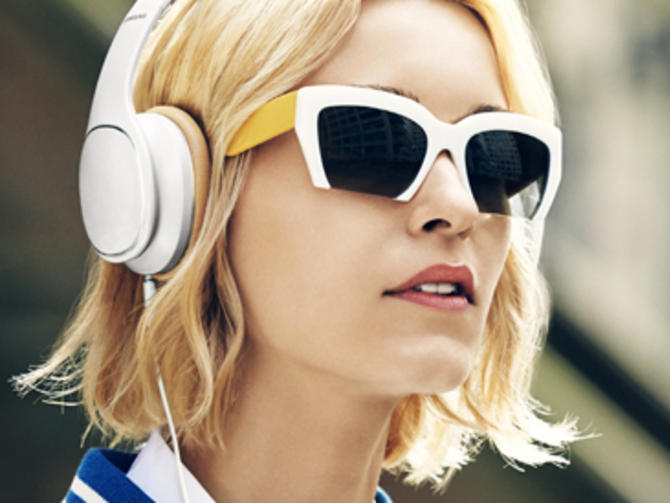 Nowadays you see a lot of people walking around with all kinds of headphones, with quite a few of them sporting the Beats Audio logo. Samsung might have thought that there was a spot to fill and become a headphone producer as well. The company is investing in every market – wearables, TV’s and refrigerators – you name it, they build it. And now they enter the arena of the premium headphones. Back in 2012 they made their first on-ear Bluetooth headphones (the BHS-6000), which weren’t that great when it comes to quality. Now they’re back in full force with the LEVEL series, which contains a Bluetooth speaker (LEVELBox), an in-ear headset (LEVELin), an on-ear headphone (LEVELon) and the (LEVELover). This series of headphones was announced at MWC in Barcelona back in February alongside various of Galaxy S5 cases and are available for purchase right now.

www.mobielbereikbaar.nl provided us with the LEVELover headphones so we could review them, and here our findings:

When you first pick up these headphones you’ll immediately get the feeling you are holding something premium, they feel very well-built and give the feeling that they will last for years. Design wise they have a very modern and premium look, which makes them a pleasure to look at. We received the white ones and they have a pearly finish applied to it. The headphones have that distinctive chrome bezel finish that we are all familiar with on Samsung devices. The inner side and cushions are made of a leather-like material and the inner side has a nice plaid pattern which adds yet another premium touch.

If you take a look at them from the side, you’ll see that the actual ear cups are in a slightly oblique position, making them very pleasant to wear. The cushions are very thickly padded and feel very soft. The tension of these headphones is just right which means wearing them for a long time isn’t a problem, and it adds a feeling that they will never drop from your head. The headphones are kind of heavy for my taste, but it’s not something that will bother you except in long bouts of using them. The headphones seal off your ears pretty well, so you get a feeling of noise suppression as sound from outside gets muffled. 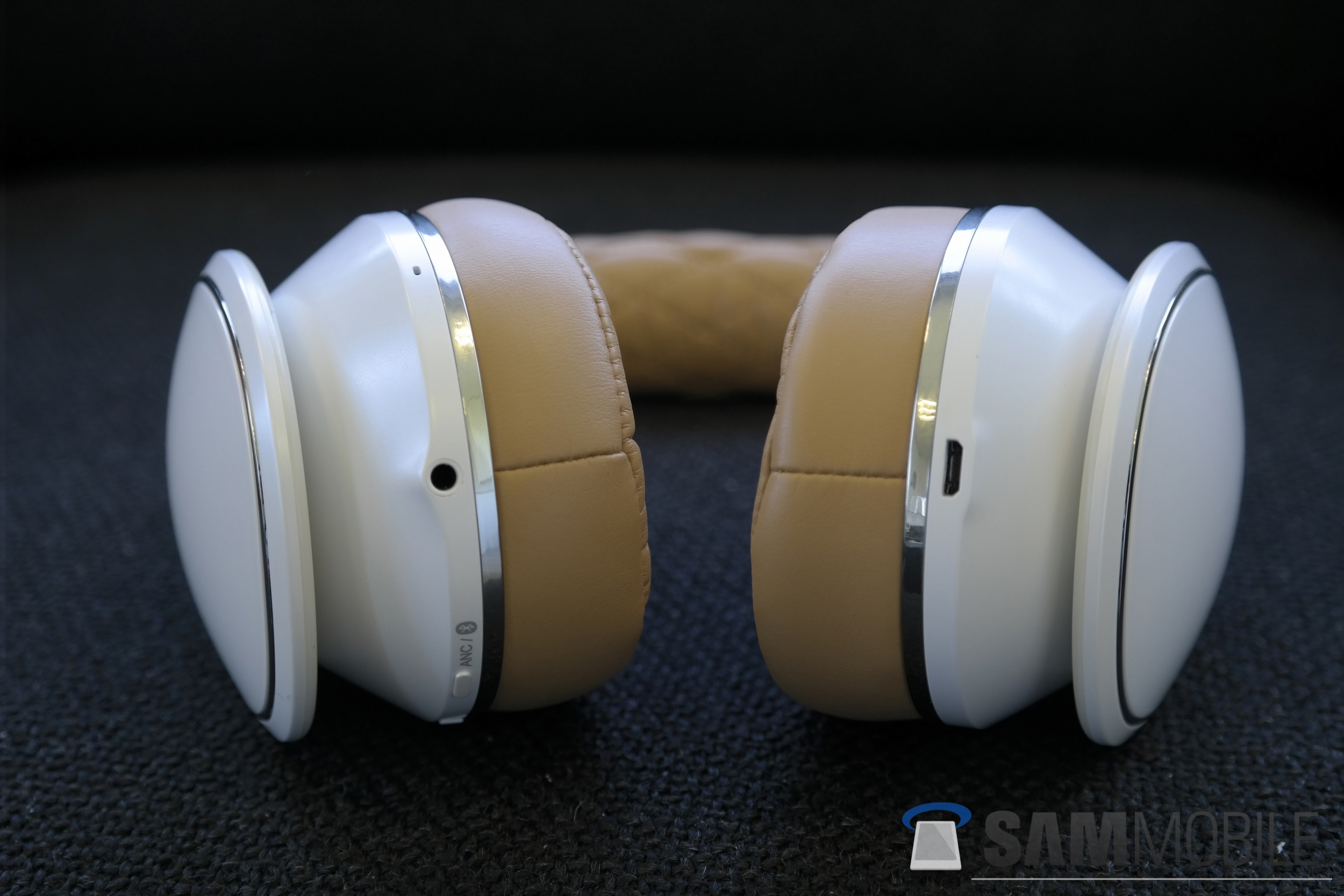 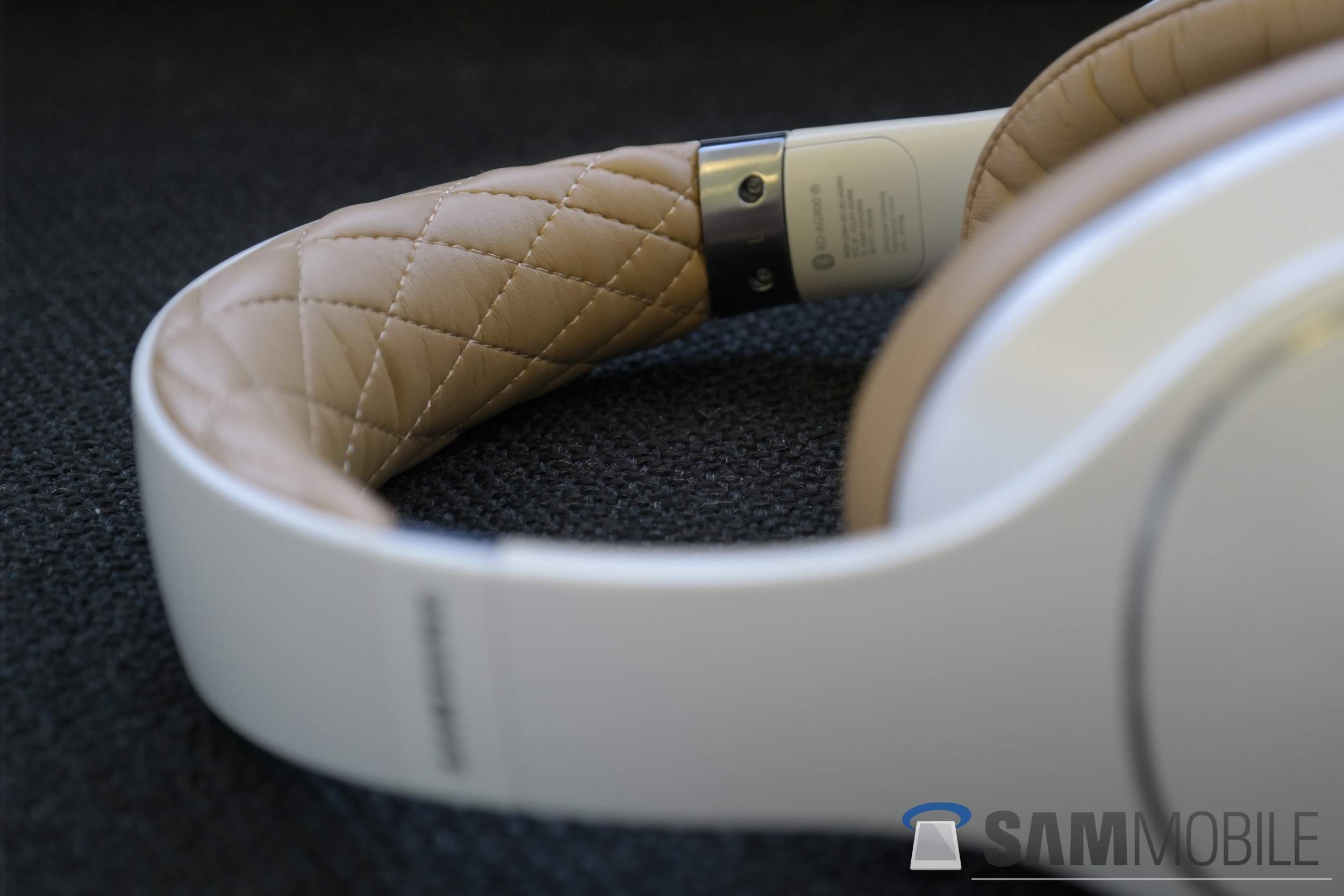 Now for the most important part — sound quality. The headphones produce a very clear and rich sound with good bass. Because Samsung used 50mm bio-cellulose driver units with a neodymium magnet, they produce powerful bass without sacrificing too many details. It seems that these magnets are 30 percent stronger than normal magnets, which means it can send out sound with less delay and produce a very clear and sharp sound.

Here’s a little background info on the diaphragm/drivers:

The size of the diaphragm/ drivers of the headphones are very important when they need to produce the bass sound. The bass sound produces a lot of air compared to other sounds, so to deliver the full bass sound, the headphone needs to let out all the air. The diaphragm of headphones is the part that converts mechanical motion into sound.

These headphones have touchpads on each side, so it does not matter if you are left or right handed. You can tap the side two times to pause a track, then tap it twice again to resume playback. You can swipe either up or down to increase or lower volume, or swipe forward or backwards to skip the track in either direction. Last but not the least, tapping and holding for three seconds will enable S Voice. Touch controls let you answer a phone call as well – when you’re listening to a track, you can tap and hold for three seconds to answer or double tap to reject a call. Very nifty features which I use very often, especially for volume control as it negates the need for me to take my phone out of my pocket, a convenience also provided by Samsung’s Gear smartwatches. 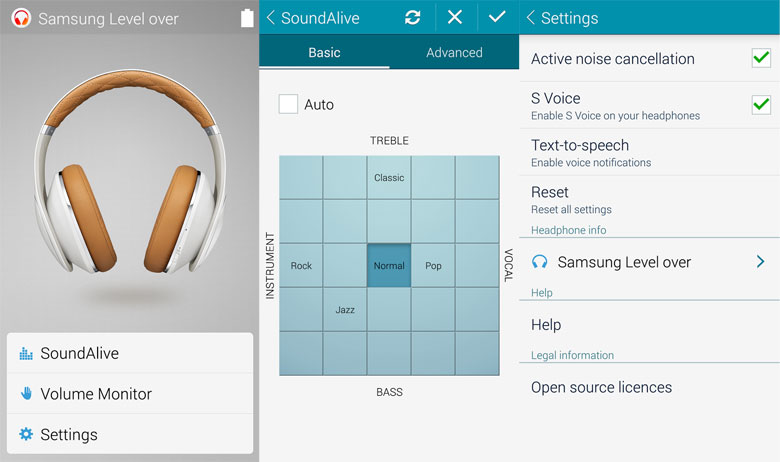 Samsung has launched an app in the Google Play Store called Samsung Level, which allows you to set various settings for the headphones. It has a volume monitor which protects the user from over exposure to high volume levels by alerting them with a cautionary reminder on the risk of getting hearing damage when exposed to an excessive amount of sound volume in a certain span of time. There is an option to choose “active noise cancellation” (ANC), which works in conjunction with the headphones’ two dual IC mics on each side to extensively reduce noise. Then there’s the “Sound Alive” equalizer, which lets you set different sound presets in an easy way, or in a more advanced way if you prefer. The easy way works through a pad like interface: here you can tap different squares for the various sound presets, while the more advanced method works through the usual slider-based interface. These sound presets can be applied throughout the whole system, such as for games, movies and video streaming.

The Level app also has a feature called “Text-To-Speech”, a voice guidance service that informs you of the arrival of a text message and its sender, pre-scheduled notices as well as alarms you have set, among others. 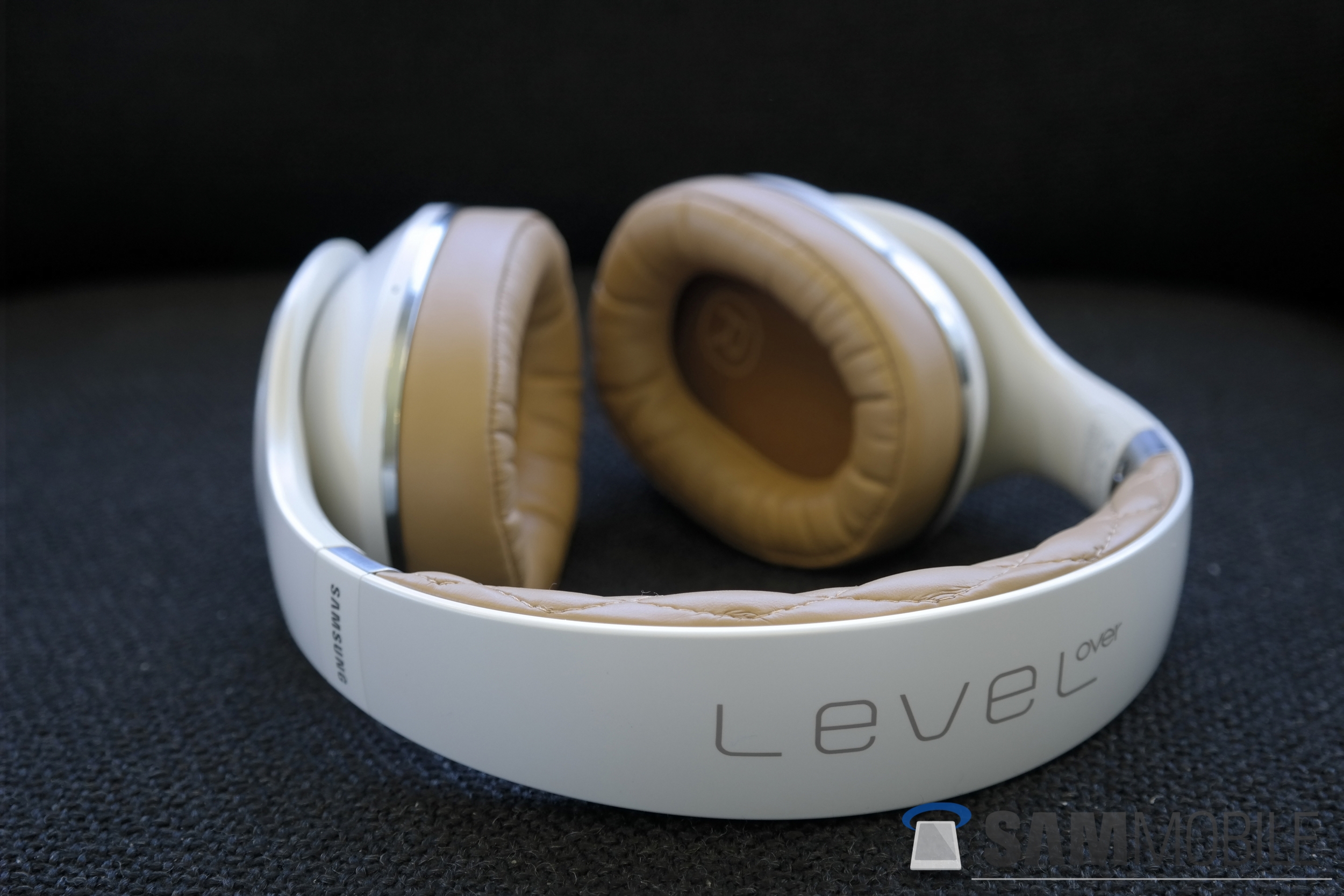 Samsung’s first real attempt to break into the premium headphone market is a good one, and they have set the bar really high for a successor. These headphones produce very nice bass and clear sound and are full of nifty features, like the touch pads on each ear cup. They are very comfortable to wear – they are a little heavy, but again, that isn’t exactly a problem when you’re using them.

So, if you have money to burn, these beautiful and quality headphones can be yours for a hefty price of €350. They’re totally worth it, so go ahead and buy them if you’re out in the market for premium headphones.