A study discovered that a majority of Galaxy S users do not appreciate Samsung’s exclusive suite of apps. Samsung has been oft-criticised in the past for bundling a lot of unnecessary and gimmicky features in its handsets, most of which did not work as advertised or were too complex to use. To make things worse, these apps cannot be deleted on nonrooted handsets. Marketing firm Strategy Analytics undertook a survey which tracked usage of 200 Galaxy S4 and Galaxy S3 devices in the US. The survey found that social networking clients like Facebook, Twitter and Instagram were some of the most widely used apps, followed by Google Search and YouTube. Facebook commanded 664 minutes of monthly use, while Instagram came in second at 151 minutes.

Meanwhile, the highest app usage of any Samsung exclusive app was for ChatOn, which commanded a six second usage monthly on the 200 devices that were tracked. In all fairness though, ChatOn is used much more frequently in emerging markets like India and China, but the fact that other Samsung utilities haven’t fared any better shows that users do not take well to these apps. Samsung has decided to dial down on the number of such utilities it offers on the Galaxy S5, which sees a new version of S Health and ChatOn. The Galaxy S5 also features a redesigned TouchWiz user interface that is much better looking to the older variant. 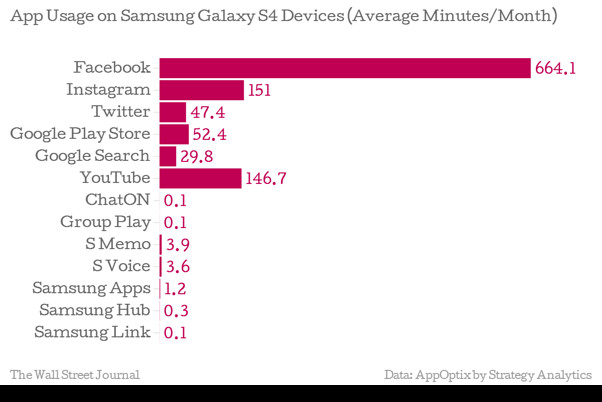