Samsung has just announced its latest flagship device, the Galaxy S5, at its Unpacked 2014 Episode 2014 event here in Barcelona, Spain. This time around Samsung wanted to keep everything simple instead of bloating the device with advanced features, because they think that’s not what the average consumer wants. The average consumer wants an advanced camera, the fast network connectivity, dedicated fitness tools and enhanced device protection features as consumers stay fit and connected in style. 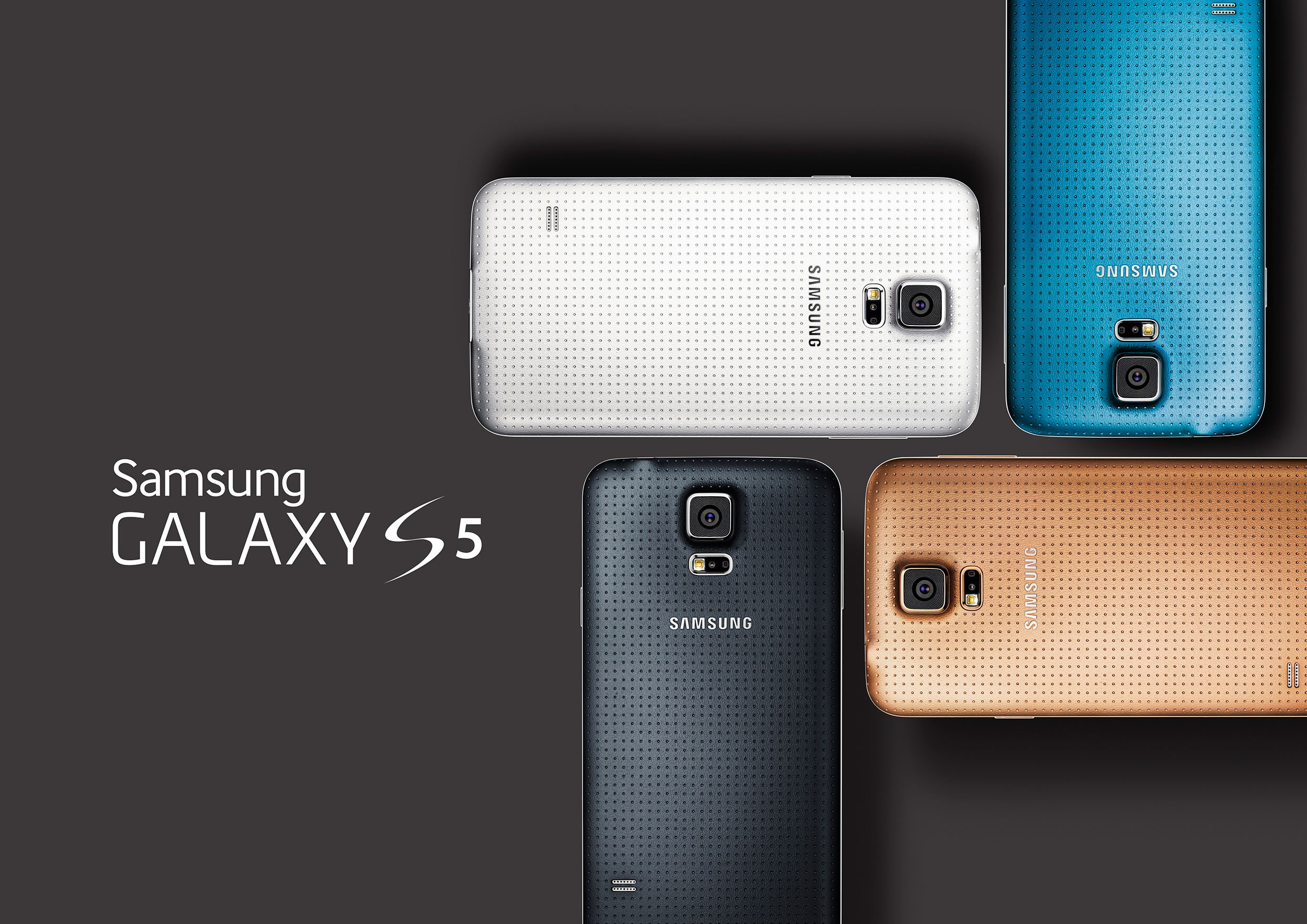 In terms of connectivity, the Galaxy S5 supports the fifth generation Wi-Fi 802.11ac and 2X2 MIMO, and supporting the large number of LTE frequency with LTE Category 4 standard, which makes the Galaxy S5 a world device. For consumers seeking an even faster connection, the Galaxy S5 now features Download Booster, an innovative Wi-Fi technology for boosting data speed by bonding Wi-Fi and LTE simultaneously. NFC, IR Blaster and Bluetooth 4.0 BLE / ANT+ are also onboard. Samsung has ditched the Micro USB connector for a USB 3.0 port, which should increase data transfer speeds by huge margins.

Samsung has done wonders with the camera tech in the Galaxy S5, both at hardware level and at software level. The Galaxy S5 now packs a 16 Megapixel camera sensor which can shoot 4K (UHD) video at 30FPS and 1080p (FHD) video at 60FPS. At the software-level, Samsung has added new camera modes: Virtual Tour Shot, Select Focus Mode, HDR (Rich Tone) and more. Samsung has equipped the Galaxy S5 with a dedicated image processing chip, and has also decreased shutter speed to 0.3 seconds between shot-to-shot. The device is also great for video calls/conferences as the device sports a 2.1 Megapixel front facing camera which shoots 1080p (FHD) video at 30FPS. The camera interface has been revamped, as well.

Let’s talk about design, Galaxy S5’s design is very similar to the one found on the Galaxy S4. From the front you will find it difficult to tell them apart but from the back, it’s a different story. The Galaxy S5 features a perforated pattern on the back cover creating a modern glam look. Its new sleek, contoured shape comes in an array of vivid colours, including charcoal Black, shimmery White, electric Blue and copper Gold, to complement the style of the individual consumer.

Samsung has equipped a fingerprint sensor into the home button of the Galaxy S5, and the implementation is simply great. You can unlock your device with the fingerprint sensor, pay for your things via PayPal, sign into websites, encrypt personal files and apps using Private Mode and open desired applications using one of your assigned fingerprint. The Korean giant has managed to make the device IP67 dust and water resistant, which means there won’t be an Active variant of the Galaxy S5 coming in the future. There is a flap cover on the USB 3.0 port to stop water from coming into the device, however, you don’t need a flap for the headphone jack.

The Galaxy S5 comes pre-loaded with Android 4.4.2 KitKat and the new TouchWiz UX. The interface is now all flat and blue, its exactly the same as on the TabPROs and NotePROs. Magazine UX has been implemented into the new TouchWiz launcher, which you can activate by swiping left from your home screen. All previous Galaxy S4 and Galaxy Note III software features are available on the Galaxy S5, as well. Samsung has introduced a Kids Mode, which is mainly designed for parents whose children love to play with their smartphones.

Samsung is going big with fitness this time. Samsung has re-designed its S Health application, to match the new user experience, and it looks simply stunning. With the enhanced S Health 3.0, the new Galaxy S5 offers more tools to help people stay fit and well. It provides a comprehensive personal fitness tracker to help users monitor and manage their behaviour, along with additional tools including a pedometer, diet and exercise records, and a new, built-in heart rate monitor.

To power all the technology inside the Galaxy S5, there is a 2800mAh battery. Dimension-wise, the Galaxy S5 is 142.0 x 72.5 x 8.1mm and weighs 145g. The Galaxy S5 comes in 2 storage options: 16GB and 32GB. The storage is also expandable via MicroSD Slot. Samsung didn’t mention any pricing but the device will be available in stores starting from April in 150 countries.

It goes without saying that many Android users who own Samsung devices are anxiously waiting for the company to start releasing the Android 5.0 Lollipop update. Unfortunately, Samsung has not confirmed the roadmap up till now so there are no concrete release dates available for Lollipop. What can be said for sure though is that […]

The rumor mill started weeks and even months before the Unpacked event invitations were sent out by Samsung. If you read all those rumors, it was clear that the successor of the GALAXY S4 would be packed with some state-of-the-art hardware, like a 64-bit Exynos processor, iris or fingerprint scanner, water and dust resistance, an […]

Thoughts on the Samsung GALAXY S5

When Samsung announced that they will have an Unpacked event in Barcelona on February 24th for unveiling their “Next GALAXY”, we all knew that Samsung was talking about the GALAXY S5, especially when they named the event as Unpacked 5. If you watched the Unpacked event, you may have noticed that the presentation was different from […]

The day we have all been waiting for has finally arrived! Today, Samsung will announce its next flagship device, the Galaxy S5, a few accessories and maybe a few more products. The Samsung Unpacked event is being held at Mobile World Congress in Barcelona, Spain. Most of you probably won’t be attending the event, but […]

Explained: Samsung’s implementation of the fingerprint sensor on the upcoming Galaxy S5

Yes, you heard it right folks! Today, we are finally confirming that Samsung’s upcoming flagship device, the Galaxy S5, will be equipped with a fingerprint sensor, and not only that but we will also be explaining exactly how Samsung implemented it and what it’s planning to use it for. Huge kudos to our insiders who […]