The new Rose Gold color variants of the Galaxy Note 3 were recently tipped to be heading to Verizon, and now an internal document of the carrier has confirmed the same. Obtained by Android Central, the document also shows that upon launch, consumers will be able to get a $100 mail-in rebate on the Rose Gold Note 3 (which, by the way, is gold on the sides, but black or white on the front and back), an offer that will last until January 26. If you’re unwilling to wait for the new premium color option, then you can instead opt for the standard white or black Note 3 as well on the $100 rebate.

Or, if the Galaxy Note 3 doesn’t rock your boat, then Verizon will be offering an even higher rebate value of $150 on Samsung’s standard-sized phones, like the Galaxy S4 (both 16 and 32GB models, in White Frost, Brown Autumn or Black Mist colors), Galaxy S4 mini, or the 2012 flagship, the Galaxy S III, in a choice of Amber Brown, Black, Pebble Blue, or Marble White. The promotion has already started in Verizon stores, so don’t forget to rush to the nearest one to take advantage of it, as long as you’re willing to sign a two-year contract. 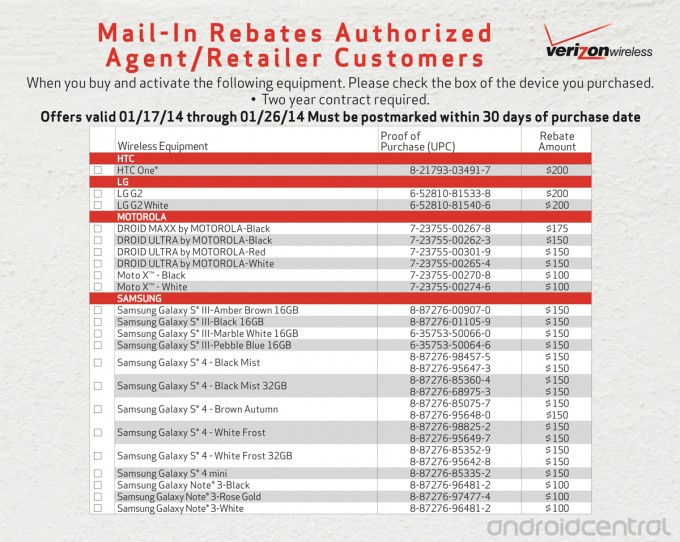