We knew the Galaxy S4 Zoom was headed for an AT&T launch, and today the carrier has officially announced that it will be carrying Samsung’s camera-cum-phone, with availability set to begin from November 8th. The price has been set at $199 on a two-year contract, or $25 a month on AT&T’s Next program; you’ll also get a free Galaxy Tab 3 7.0 with the phone, as part of the carrier’s ongoing free tablet deal, and a $100 Promotion Card if you trade-in an eligible device.

The Galaxy S4 Zoom sports a 16-megapixel camera with 10x optical zoom, optical image stabilization, Xenon flash, a zoom ring to zoom in/out of an image, and lots of features on the camera software. Other specs are pretty similar to the Galaxy S4 mini’s, including a 4.3-inch qHD Super AMOLED display, 1.5GHz dual-core processor, 1.5GB of RAM, 8GB of internal storage, all the usual forms of connectivity, a 2,330 mAh battery, and Android 4.2 Jelly Bean.

Hit the source link to sign up to be notified when the moment the device becomes available for purchase. 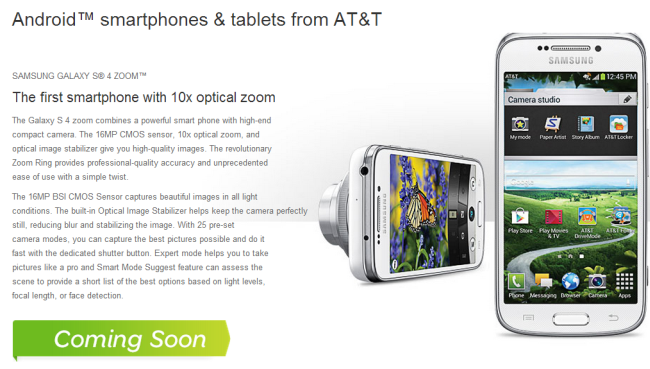