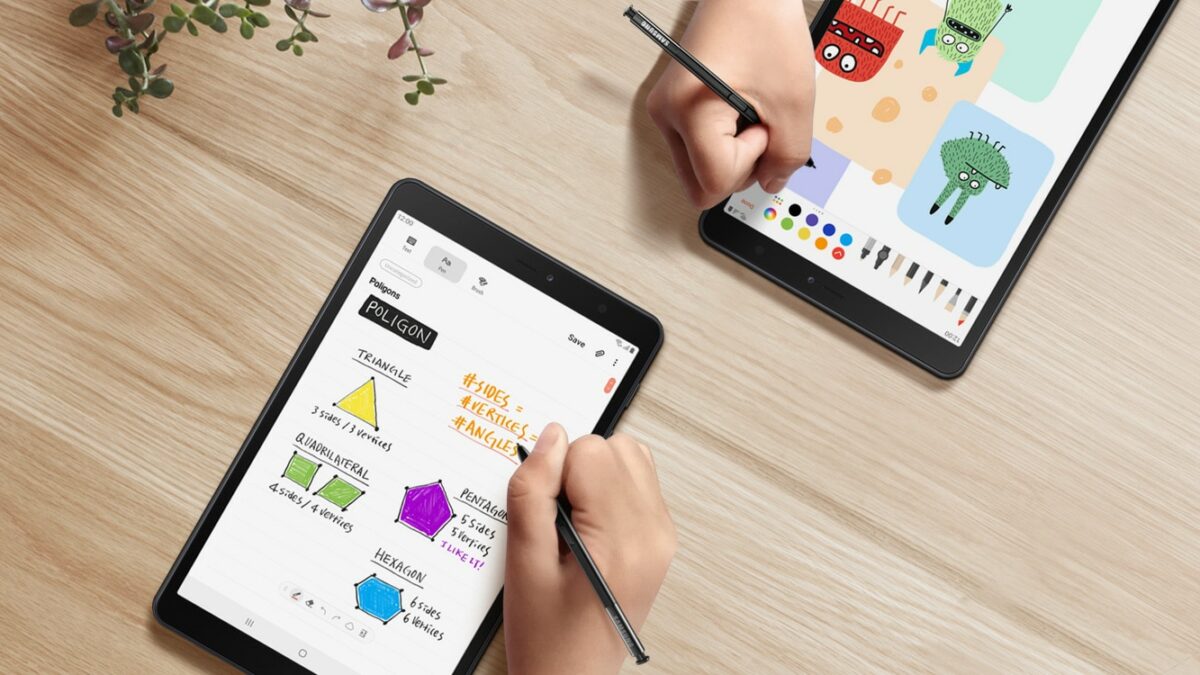 Despite Google abandoning Android tablets, Samsung continues to make them. In fact, for a product category that seems to have no future, the Korean company is surprisingly active in the tablet market by launching multiple models in recent months. It is also the third-largest vendor of tablets globally according to recent data. 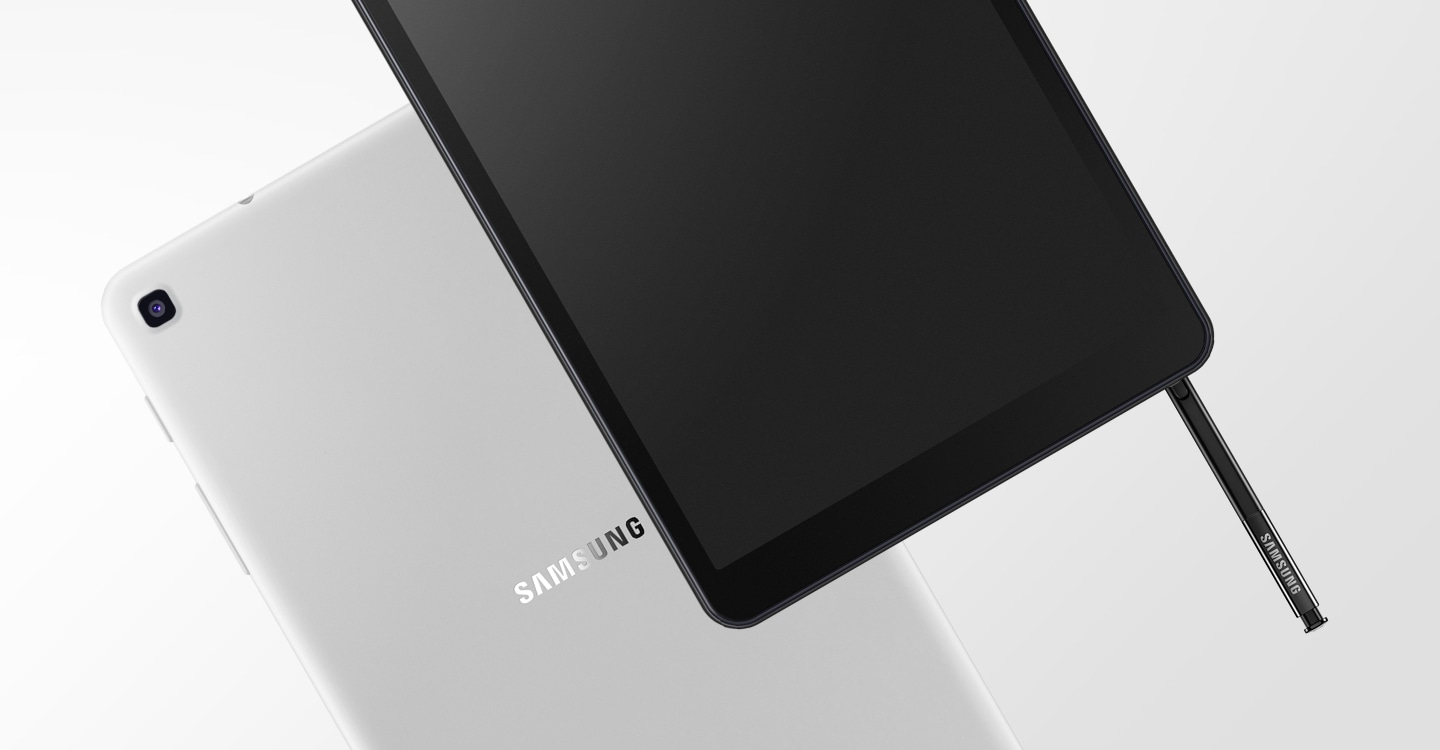 The Galaxy Tab A with S Pen, also known as Tab A 8.0 (2019), is one of the newer tablets from Samsung’s stable this year. With its 8-inch screen, it is also the only tablet to sport a sub-10-inch display among the newer models so far. For those in the Android ecosystem, it is probably the cheapest tablet from a major brand to come with stylus functionality.

The Galaxy Tab A with S Pen looks cheap due to its plastic build and has a boring design by today’s standards. It weighs 325 grams and measures 201.5 x 122.4 x 8.9 mm, which is rather thick given the battery inside. The thickness, however, makes it possible to have a dedicated slot for the S Pen like the one found on Galaxy Note smartphones. Not just the slot, the click-to-eject mechanism and the S Pen itself are very similar to their mobile counterparts. In contrast, the Galaxy Tab S4 and Tab S3 come with a larger S Pen that is comparable to a real pen or a pencil in size and needs to be carried separately. 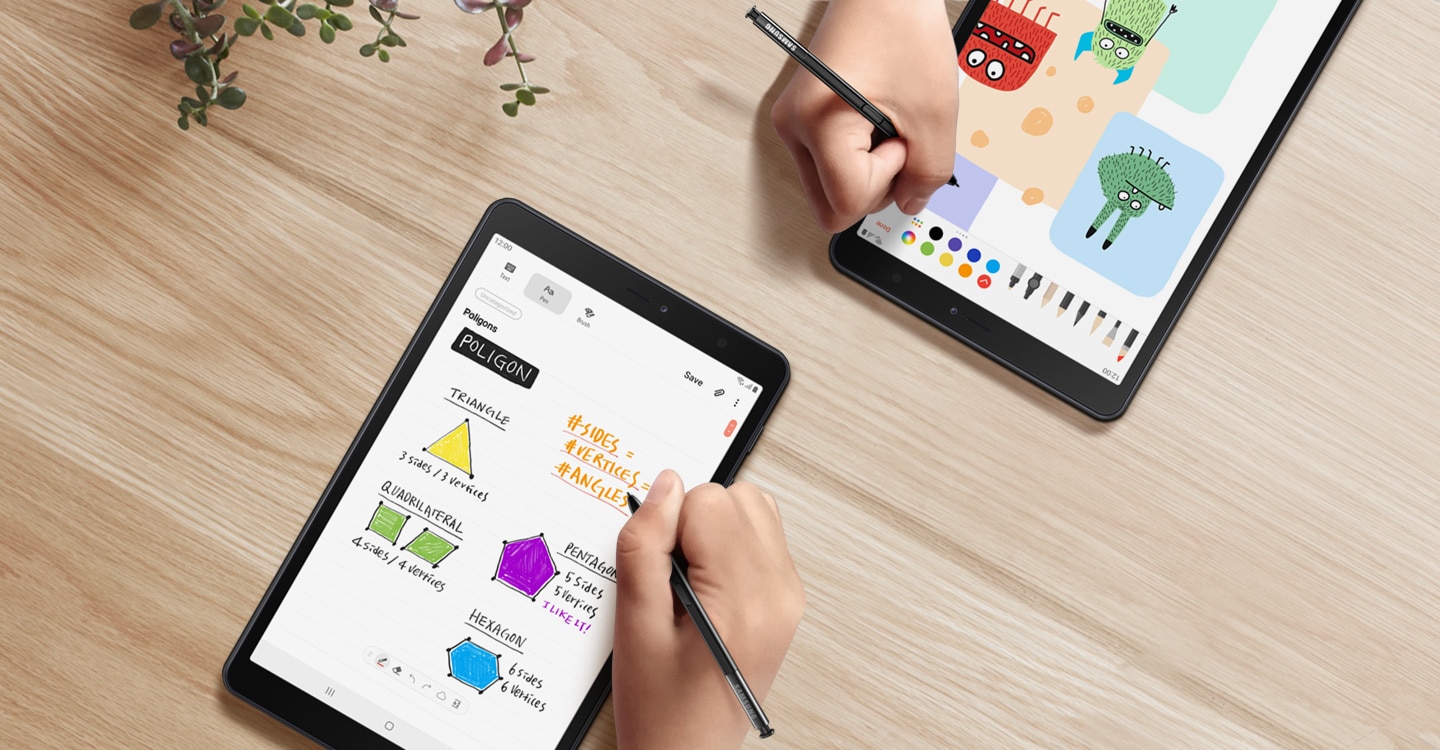 The front of the tablet is occupied by an 8.0 inch 16:10 display with substantial bezels on all sides. The top bezel hosts an earpiece-cum-speaker, selfie camera, and a proximity sensor. Despite the large bottom bezel, there are no capacitive navigation buttons here. The power and volume rocker are on the left, while the SIM and microSD slot is on the right. Down below, there is a speaker grille, microphone, USB Type-C port, and the S Pen slot. The device also has a 3.5mm headphone jack which is placed on the top side of the device along with a secondary microphone. The backside is clean with a single camera on the top-left corner and Samsung branding in the middle.

The Galaxy Tab A with S Pen is a lower-midrange tablet that is not ideal for anything more than media consumption and taking notes. It comes with an 8.0-inch TFT display, Exynos 7904 octa-core CPU with Mali-G71 GPU (the same chipset found in Galaxy M30, A30, and others), S Pen support, 3 GB RAM, 32 GB internal storage, microSD slot, LTE support, 8 MP rear camera, 5 MP selfie shooter, 4,200mAh battery, USB Type-C port, and more. It runs Android 9 Pie with Samsung’s One UI. For the complete list of specifications, you can go to our device specifications page for this tablet. 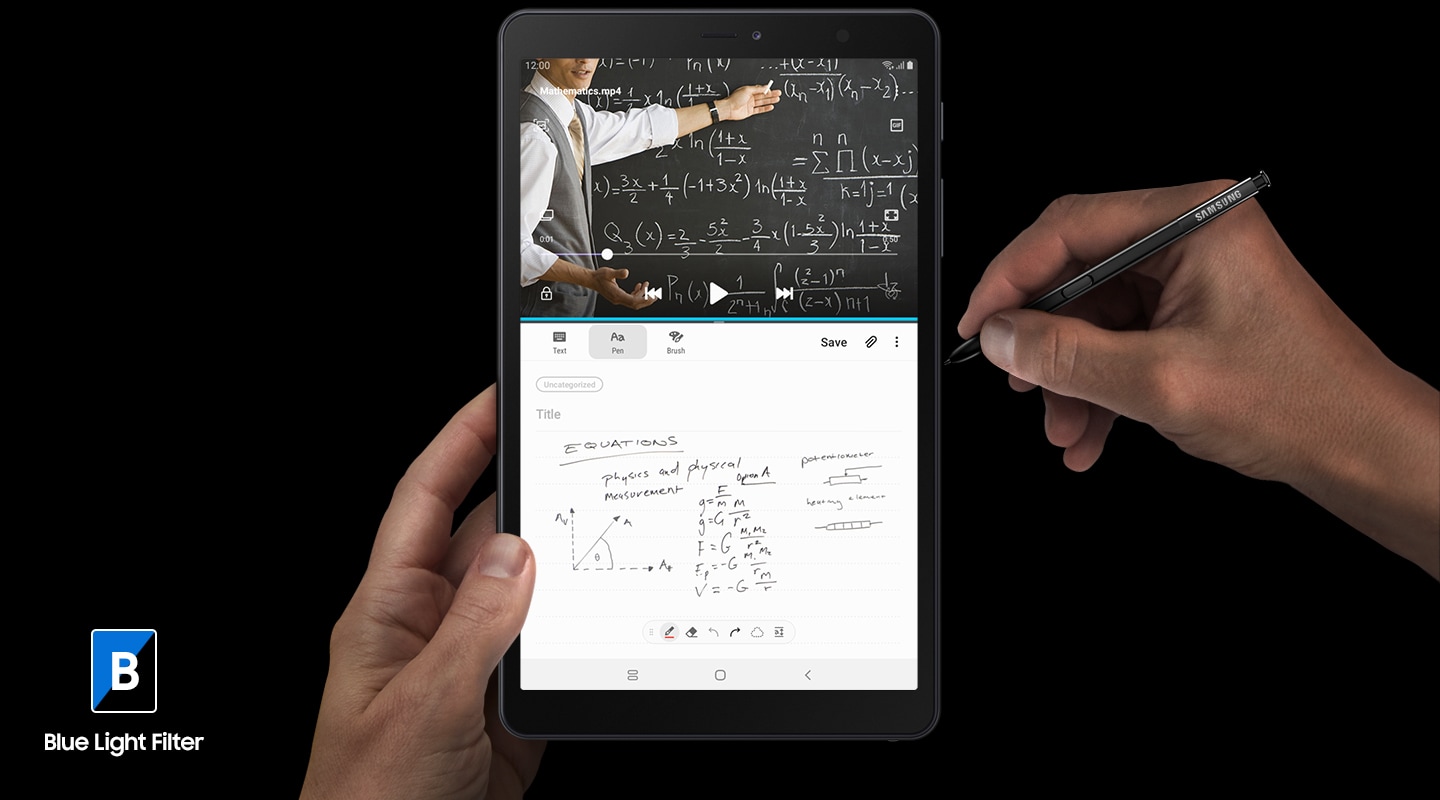 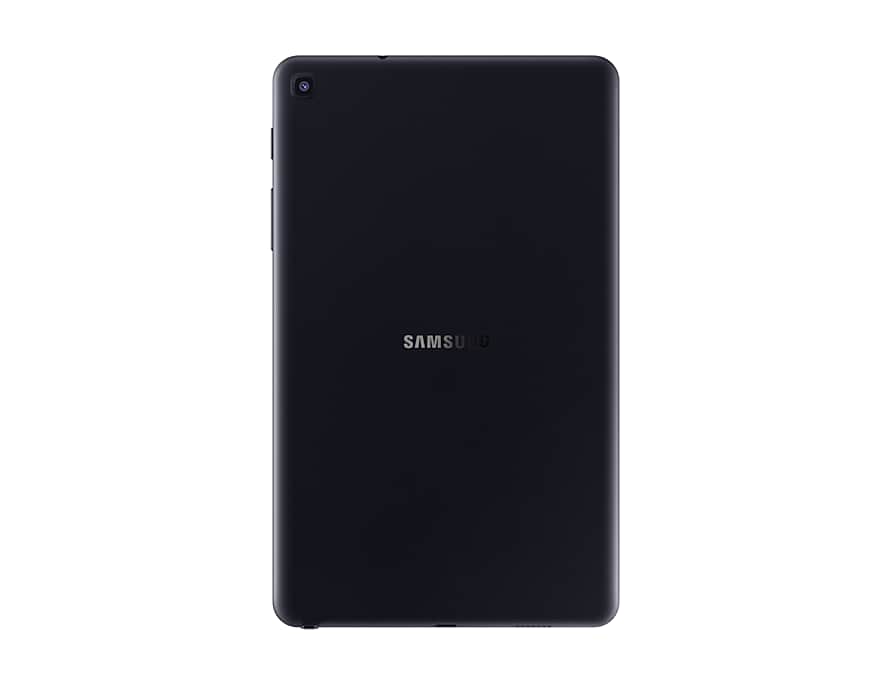 Samsung has never really put serious efforts into the cameras on its tablets, and that holds true for the Galaxy Tab A with S Pen. There are no dual or triple-camera systems here and the tab comes with a very basic 8-megapixel f/2.0 rear camera with autofocus and a 5-megapixel f/2.2 selfie camera. It is clear these cameras exist for occasional document scanning and video calls and are not meant to match the imaging capabilities of your smartphones, even those in the same price range. 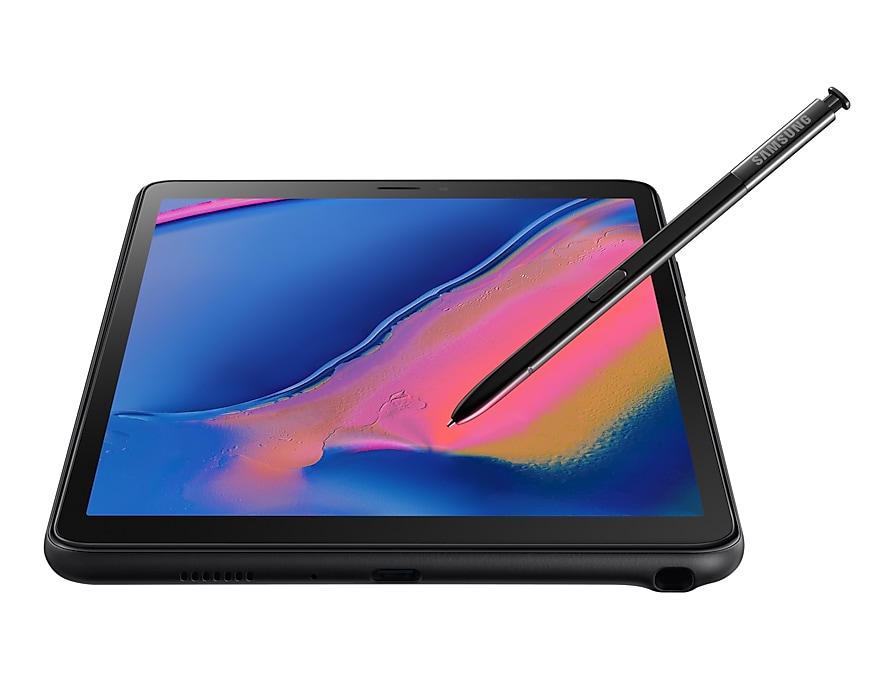 The Galaxy Tab A with S Pen comes with Android 9 Pie and One UI out of the box. One noteworthy change this OS version brings to all Galaxy tablets is the Night mode. Since Samsung’s Android tablets lack any kind of support for themes, the Night Mode is very helpful for users who don’t like the bright default theme. This makes using the tablet in the dark a lot easier on the eyes.

Other than that, the software features here are mostly similar, with the added S Pen capabilities, to what you would find on other Galaxy budget and midrange devices running One UI. The S Pen doesn’t introduce any new tricks but offers the usual array of notetaking and drawing options, including the very handy Air Command feature.

Samsung announced the Galaxy Tab A with S Pen towards the end of March 2019. It comes in black and gray color options and is priced at RM1,099 (~$265) in Malaysia for the Wi-Fi+LTE variant. So far, the company doesn’t seem to be offering a Wi-Fi only version, although that could change as the device availability expands to more markets.

You can download firmware, Samsung APKs, and wallpapers for all Samsung devices, including the Galaxy Tab A with S Pen, for free from our website. We also offer optional premium plans that provide additional benefits such as expert support, faster downloads, giveaways, ad-free browsing, dark mode, etc.