Announced in November 2018, the Exynos 9820 had a lot to make amends for since its predecessor, the Exynos 9810, hadn’t been that impressive when compared to its Snapdragon counterpart. Samsung tried to address that with a new design and new CPU configuration for the Exynos 9820. It did bring some promising improvements.

However, there was still a major shortcoming that Samsung had to address with the Exynos 9825, a mid-cycle refresh of the chip. The Exynos 9820 was manufactured on the 8nm LPP process node from Samsung while Qualcomm’s Snapdragon 855 utilized TSMC’s superior 7nm process. This process technology difference would give the latter a clear edge over the Exynos 9820. The Exynos 9825 would be Samsung’s first mobile chip built on its 7nm EUV process.

A fundamental change was made to the CPU configuration on Samsung’s flagship chip with the Exynos 9820. It moved from a 4+4 setup to a 2+2+4 setup with Samsung’s two custom Mongoose cores being the top performance cluster.

Samsung switched things up with the Exynos 9820 by opting for three clusters of processor cores with different architectures. Its 2.73GHz Mongoose M4 custom cores were doing the heavy lifting, aided by a pair of 2.31GHz Cortex-A75. The chip also had 4 1.95GHz Cortex-A55 cores to handle the less resource intensive tasks.

The Exynos 9820 came with an ARM Mali-G76 GPU in the MP12 configuration. Samsung claimed that the new GPU delivered 40 percent performance boost or 35 percent power savings compared to its predecessor.

LPDDR4x memory is supported by the Exynos 9820 with its 4x 16-bit CH LPDDR4X @ 2093MHz memory controller. Smartphones with this processor were offered with up to 12GB of RAM.

The advanced image signal processor in the Exynos 9820 provided support for up to five sensors in order to enable multi-camera solutions. It could support a combination of 22MP rear and front cameras in addition to a 16MP + 16MP dual camera system at the back.

The Exynos 9820 doesn’t have an integrated modem. It was paired with the Exynos Modem 5100 for the Galaxy S10 5G. The handset was Samsung’s first 5G smartphone but it was made available only in limited markets.

Samsung launched its first neural processing unit or NPU with the Exynos 9820. It said that this enabled the chip to perform AI tasks around seven times faster than its predecessor. The dedicated NPU was able to carry out AI tasks on the device itself instead of sending it to an external service. This improved performance and increased security for personal information. The NPU also enabled a variety of new experiences such as intelligent adjustment of camera settings based on surroundings in addition to powering AR and VR experiences.

A widely used way to gauge how much improved a new chip is compared to the one it succeeds is by benchmarking it. The process involves running a standard workload on the device in the interest of consistency.

Benchmarking apps test several different aspects such as the GPU, CPU and memory to provide an estimate of how the chip performs in comparison to others. While benchmarks are rarely representative of real-world performance, there’s a good yardstick to use in order to quantify the improvements. 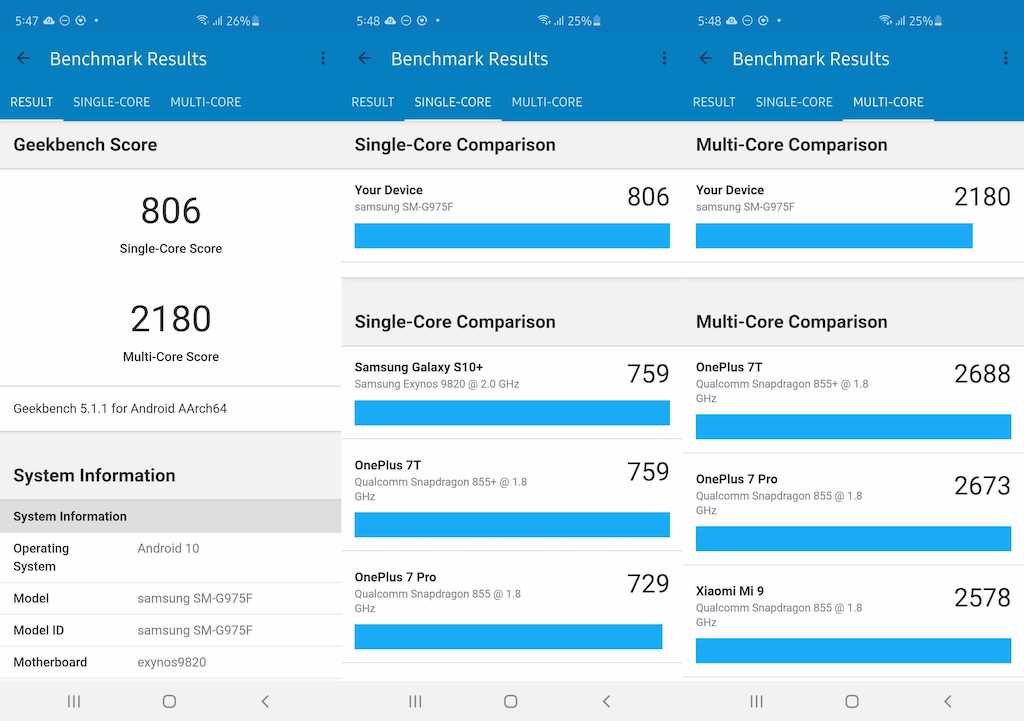 Geekbench is a popular benchmark that’s used to measure the single-core and multi-core performance of mobile chips. The Exynos 9820 in our Galaxy S10+ with 12GB of RAM achieved single and multi-core scores of 806 and 2180 respectively. 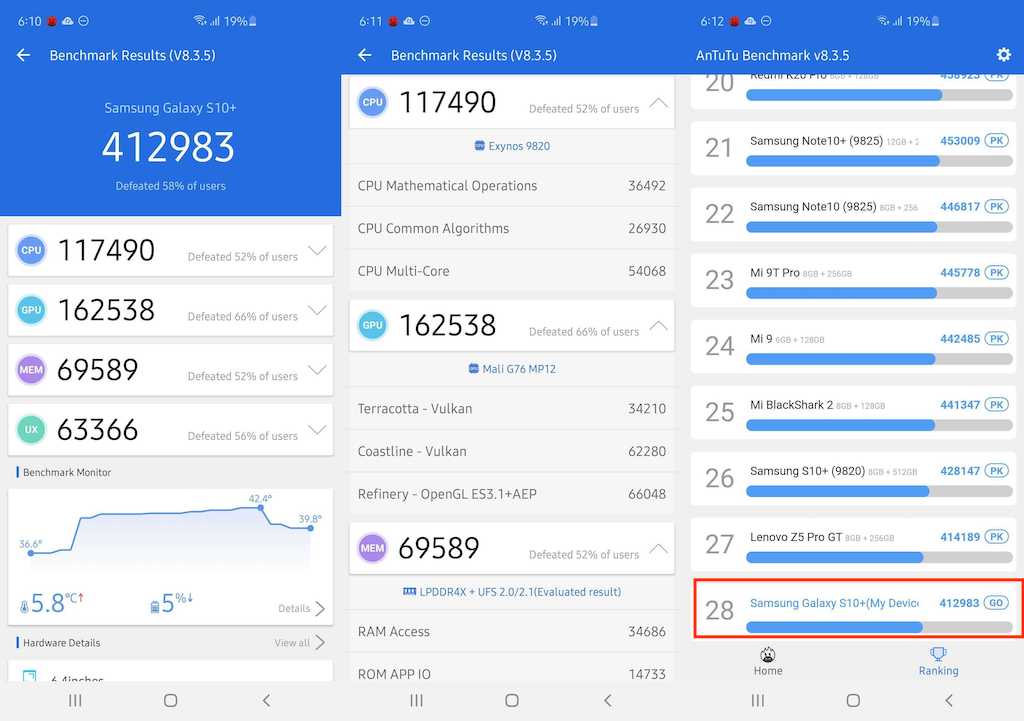 The AnTuTu benchmark runs several tests on the device and assigns an overall score as well as an individual score for each of the tests. Our unit scored 412983 overall, landing on the 28th spot in the leaderboard. 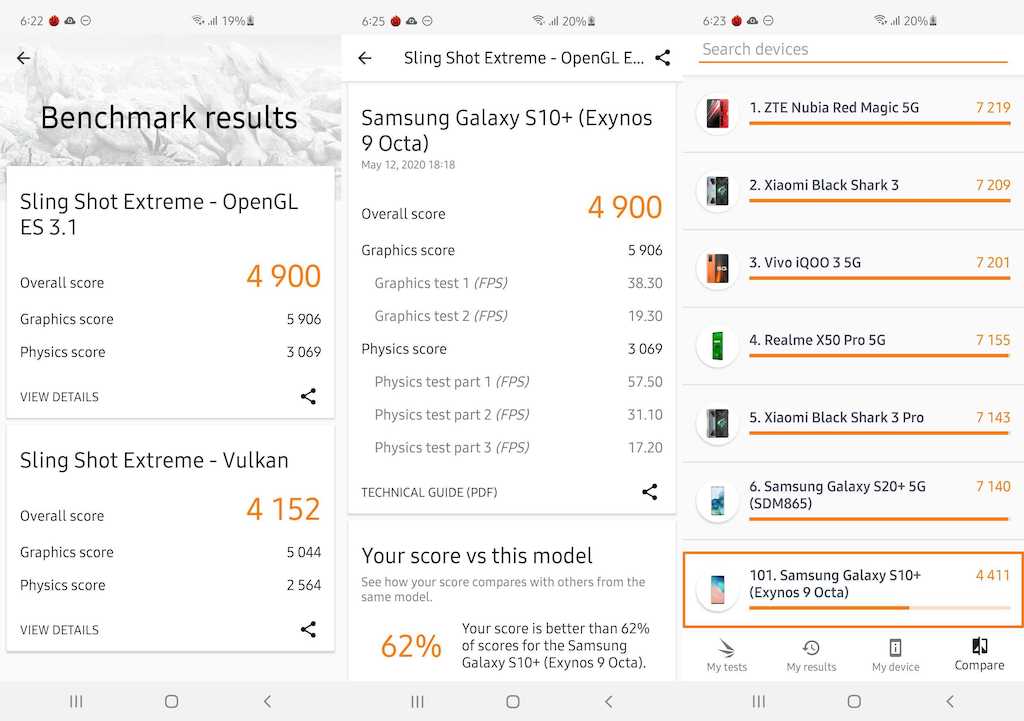 3DMark is primarily used for measuring GPU and CPU performance with Vulkan and OpenGL ES benchmarks. The workload that it runs on the device includes instanced rendering, volumetric lighting and depth of field. The Exynos 9820 in our unit scored 4900 overall on Sling Shot Extreme.

The following Samsung Galaxy smartphones use the Exynos 9820 processor: