Samsung Display is once again the largest display supplier for the mobile industry after the company lost the title to BOE Technology near the end of 2018. However, as more OEMs continued adopting AMOLED solutions for their 2019 smartphones, Samsung Display regained its top spot as the industry’s biggest player.

This is according to a Gizmochina report citing IHS Markit, which reveals that Samsung Display covered 29% of the mobile display segment at the end of Q3 2019, up from 21.3% only a quarter earlier. Meanwhile, BOE Technology’s market share fell below 20% in the third quarter.

That’s 2 million more than the largest amount of LCD panels ever shipped in a quarter for the mobile industry. This means that, effectively, AMOLED is now the most popular type of mobile display. 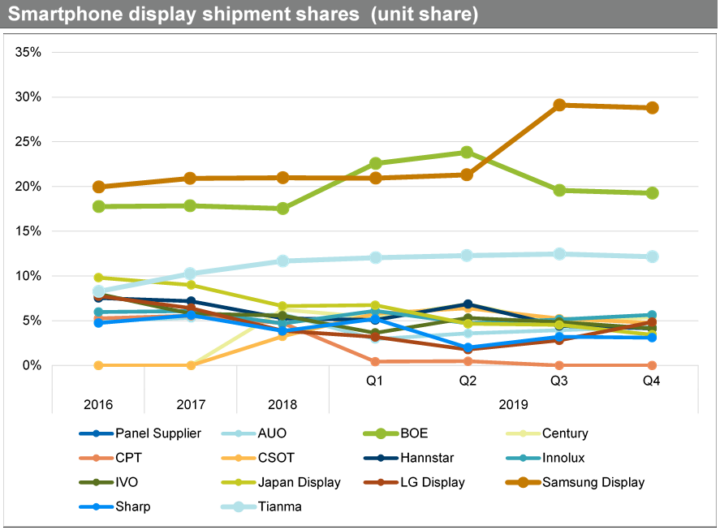 Samsung Display shipped ‘only’ 93 million AMOLED panels in Q2 2019, and an increase to 146 million units over the course of three months is very impressive. Samsung Display’s clientele includes various brands, most of which can be viewed as direct competitors to the company’s mobile division. Major brands include Apple, Huawei, and Xiaomi, all of which have increased their adoption of AMOLED panels throughout the year, thus helping Samsung Display to bump up its market share.

Samsung Display is in a very favorable position, it seems. We don’t expect LCD panels to make a strong comeback, and even though the competition will start gearing up for the increasing AMOLED demand, it will be very difficult to compete with Samsung Display in this climate given its expertise.