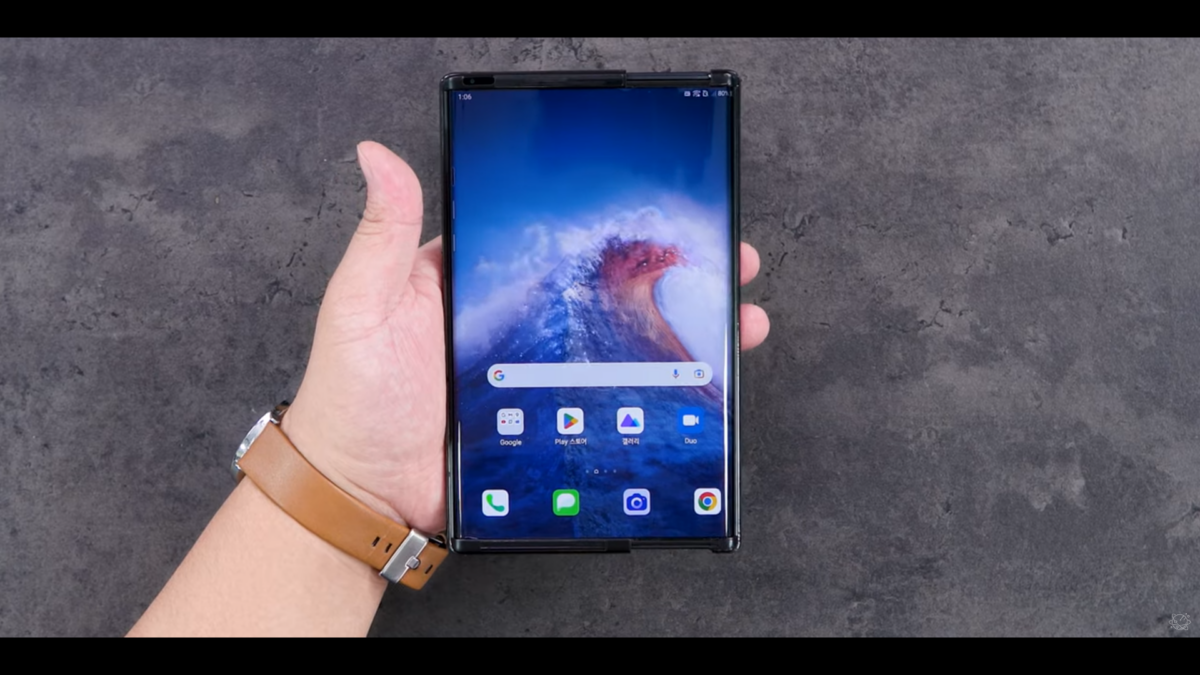 Samsung Display and LG Display have been working on flexible and foldable display technology for many years. And before LG left the mobile market in 2021, the company was on the brink of releasing its first device based on foldable display technology. More specifically, the company devised a rollable phone. And while LG never got to release the phone to the general public, a few high-ranking LG employees/engineers were reportedly allowed to buy it.

A new video detailing the so-called LG Rollable has popped up on YouTube. This video was made possible by one employee who, at some point, bought the rollable device before LG shut down its mobile division worldwide. The rollable phone was accompanied by a message saying “The spirit of challenge to develop the Rollable will always remain.”

Although the LG Rollable will never have the chance to compete with Samsung’s foldable and future rollable devices, this video allows us to imagine what Samsung’s potentially-strongest rival in the foldable/rollable device market could’ve offered.

The LG Rollable has a 6.8-inch POLED display when used as a regular smartphone, but the panel can extend from one side to offer a 7.4-inch viewing area.

The device is powered by the Snapdragon 888 chipset and 12GB of RAM. It has 256GB of storage and a 4,500mAh battery. It weighs 285 grams, so it’s only marginally heavier than the Galaxy Z Fold 4. Although the device doesn’t have as many cameras as the Z Fold 4 or a secondary display, the rollable action is motorized, which probably explains the phone’s weight.

Equally impressive is the UI. The software looks quite capable and complete. The UI can adapt between the two screen sizes on the fly, and even the default wallpapers included with the phone are able to animate and stretch out when switching between phone and tablet modes.

The LG Rollable will never hit the market, but it’s without a doubt one of the best examples of a rollable device using foldable display technology. It could’ve rivaled Samsung’s Galaxy Z Flip or Z Fold series, but as it stands, it merely serves as a reminder of what could’ve been and a preview of what Samsung’s future rollable phones might offer.

Check out the video below and let us know what you think. Should Samsung pursue this type of design? Would you be more willing to buy a rollable rather than a foldable phone?

After dominating the foldable smartphone landscape, what’s next for Samsung? Over the years, there have been many indications that suggest phones with rollable or sliding displays might be next. Samsung has showcased some of these display technologies as well. How long we’re made to wait for these devices remains a mystery for now. In the […]

Market watchers expected Samsung to strike a deal with LG Display for the latter company’s W-OLED TV panels. A survey from earlier this year estimated that Samsung Electronics could end up buying around 2 million W-OLED TV panels from LG Display in 2022, but more recent reports say otherwise. Although Samsung and LG seemed like […]

Late last year, a sketchy-looking rumour said that Samsung was looking at LG as a potential supplier for OLED panels. While that might seem ludicrous initially, it makes sense, given Samsung’s vehement anti-OLED sentiment. Now, yet another report has emerged online that essentially confirms the first one. Sources familiar with the matter have told Korea Herald […]

Samsung Display’s new QD-OLED display technology has been turning a lot of eyeballs at the ongoing CES 2022 event in Las Vegas. The company is so confident with the latest technology that it is making direct comparisons with LG’s best OLED TVs at its CES booth. Some experts have already been able to test QD-OLED and […]

After exiting the OLED TV space, Samsung resisted launching new OLED TVs for almost a decade. It even ran marketing campaigns against LG’s OLED TVs and the burn-in factor associated with OLED panels. However, it seems like the company is finally coming to its senses, and it could unveil new OLED TVs next year. According […]