India’s smartphone market is growing, yet Samsung’s share of the market is in decline. According to a recent paper published by IDC, Samsung is the only OEM to have lost significant market share year-on-year since Q3 2018. Xiaomi did too, but not nearly to the same extent, and it managed to maintain its spot as India’s number one smartphone vendor.

Samsung’s smartphones accounted for 22.6% of India’s market a year ago, but now the company is looking at an 18.9% market share. Likewise, the company shipped 8.8 million smartphones this year compared to 9.6 million a year before.

In contrast, Xiaomi dropped only 0.2% from 27.3% market share last year, but still shipped 1 million more smartphones this year. Meanwhile, Samsung’s other rivals from China including Vivo, Realme, and OPPO have all gained market share and increased their shipments over the past twelve months.

Samsung is losing ground in India

Samsung’s year-on-year smartphone shipments dropped from 9.6 to 8.8 million, according to the IDC report which seems to loosely corroborate the shipment data shared by Counterpoint Research only a couple of weeks ago. A fairly large chunk of all the smartphones shipped to India over the last year was actually part of the Galaxy M series, as the company reportedly pushed more than 2 million Galaxy M10, M20, and M30 to the market in just a few months of availability. 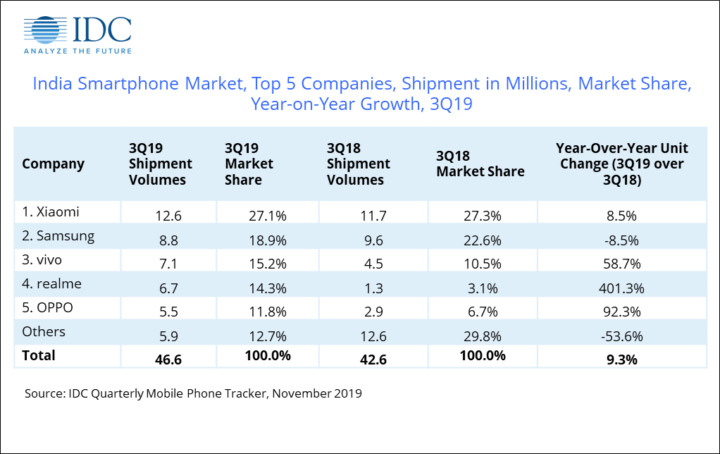 The company is now reportedly planning on launching the next Galaxy M (2020) lineup both online and through partner retail stores in India. This change in strategy could help the company recover, especially given the apparent popularity of the Galaxy M series in India.

Realme is showing its teeth

Realme is now the fastest-growing mobile phone manufacturer in India and it represents a new threat for Samsung. Realme registered an impressive 401.3% year-on-year growth rate. The company, which was officially established last year by the ex-VP of OPPO, shipped 1.3 million smartphones by Q3 2018 and a whopping 6.7 million units by Q3 2019. 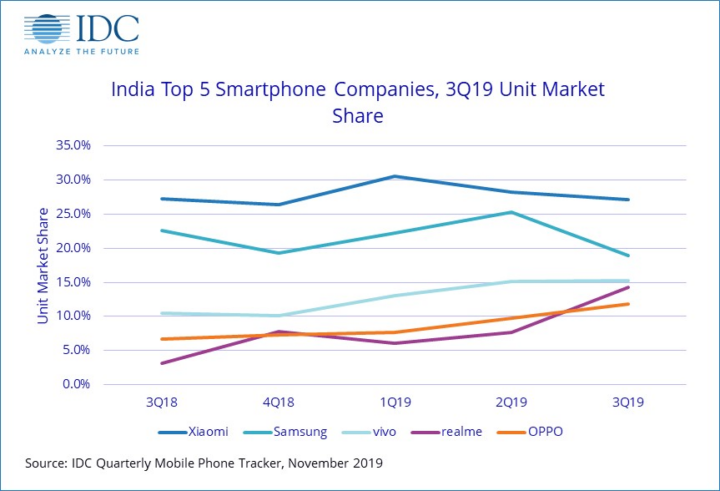 Realme was only 0.4 million smartphones shy from grabbing the third place from VIVO, and 2.1 million shipments away from matching Samsung’s figure, so this threat should probably not be ignored by the Korean tech giant. Realme bumped its market share up from 3.1% to 14.3% year-on-year.

All in all, Samsung is facing stronger and stronger opposition from Chinese OEMs in India. The company still occupies a decent second place, but its position is threatened and the podium could look different next year.