Here’s how you capture burst photos on One UI 2.1

With One UI 2.1, Samsung has changed the way users take bursts shots and record quick videos on a Galaxy device. The updated Camera app lifts these features from the Galaxy S20 series, and in case you’re wondering, these changes are actually pretty good! They put more control at your fingertip and speed up some processes.

Recording quick videos is faster than ever before

With the updated Camera app on your One UI 2.1 phone, all you need to do in order to record a quick video is tap and hold the shutter button regardless of whether you’re in photo or video mode. The video recording will go on for as long as you keep the shutter button pressed, and this works for both the rear-facing and front-facing cameras.

The long-press action was previously reserved for burst shots, which means this particular feature has been changed as well.

Taking burst shots or GIFs on One UI 2.1

Now, with up to 100 new burst shots stored in your phone’s memory, you might be thinking your Gallery is going to be a mess. But that’s not the case. Similar to Single Take pictures/videos, your burst shots are neatly organized in the Gallery app under a single parent photo (the first burst shot from the bunch). Tapping that photo in your Gallery will reveal all the other burst shots, and you can delete them one-by-one or all at the same time.

Samsung also introduced an additional option to capture GIFs instead of bursts photos when performing the swipe down shutter button gesture. For GIFs, tap the cogwheel icon in the viewfinder, tap Swipe Shutter button to edge to under Pictures, and select Create GIF (or Take burst shot if you want to revert to the default setting). 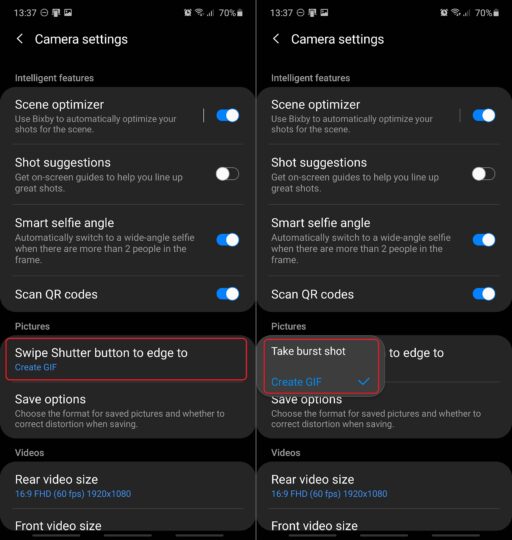 A couple of gripes

The new input methods for recording quick videos and capturing burst shots/GIFs are nearly perfect, but there are a couple of gripes we’d like to address.

First, GIFs captured this way contain up to 30 shots but the end-result has such a low frame rate that it’s quite off-putting. On the bright side, you can mend this to a degree, but you have to dig a bit deeper into the Gallery app.

To solve this low fps problem, open Gallery, select your GIF, tap Edit, and increase the speed of the GIF from the default 5 to anywhere between 10-15, then tap Save. Speeding up the GIF will obviously make it shorter, but the higher frame rate is almost a necessity. 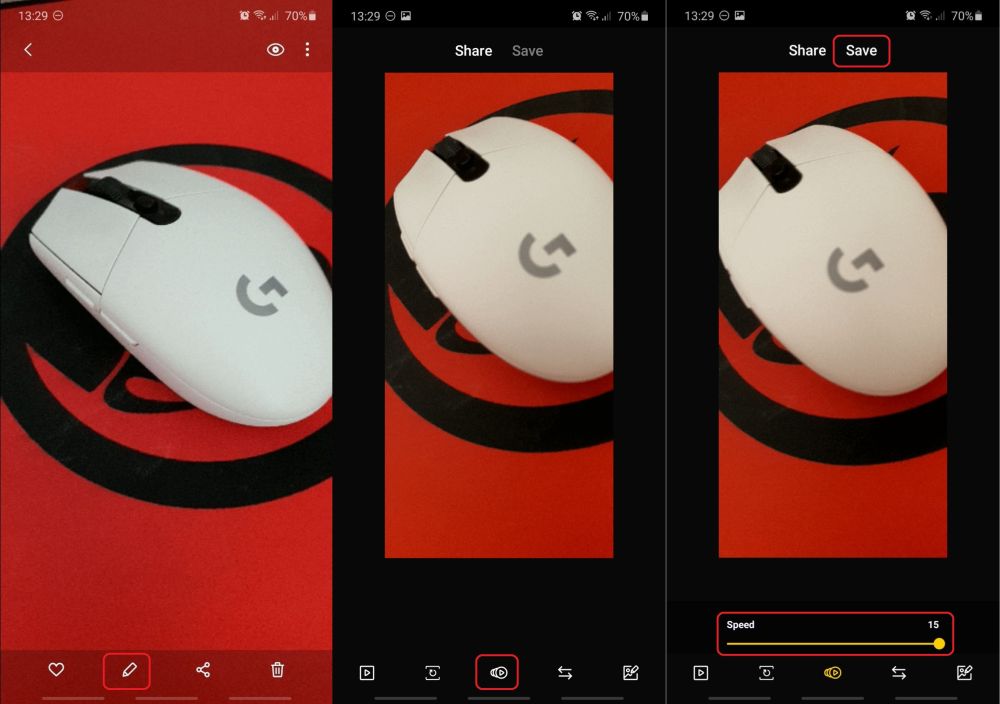 Second, this is not as much of a gripe as it is a wish. It would be splendid if the new quick recording and burst modes could be combined. You’re already required to keep the shutter button pressed when recording a quick video, so having the ability to also swipe the button down to capture burst shots along with your video would be perfect. Perhaps there are technical limitations as to why this is not possible, but it would be nice to have.