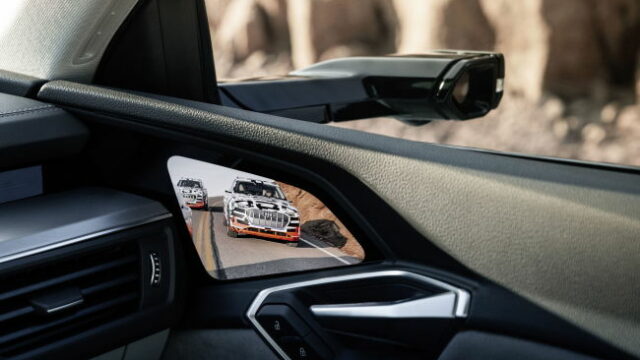 Samsung that Like many car manufacturers, Audi is making all-electric cars as well. The company has revealed the e-tron, its first electric SUV. The vehicle will be out by mid-2019 and interested customers can reserve one right away for $1,000. Samsung Display, the conglomerate’s display affiliate, has confirmed that it’s going to supply the OLED displays for Audi’s first electric SUV.

Samsung Display has confirmed that it’s supplying the 7-inch OLED displays that will be present in all units of the Audi SUV. Audi’s innovative virtual side-mirror system will rely on these displays as the vehicle won’t have conventional side mirrors.

These 7-inch OLED displays that the virtual side-mirror system relies on are mounted just above the handle on both front doors. The rearview cameras are connected to these displays. Drivers can cycle through different views and angles for turning street corners, highway driving and parking.

This system replaces conventional side mirrors because drivers can adjust the view using their fingers on the touch-enabled displays. It’s actually not the first time that Samsung is supplying displays to this German auto giant. Samsung Display similarly supplied the 5.7-inch OLED panels for last year’s flagship Audi A8 sedan.

OLED displays aren’t the only component Samsung and Audi have teamed up for. The former has already confirmed that its Exynos processors will be used in Audi’s infotainment systems. The Audi Progressive SemiConductor Program confirmed Samsung as a partner two years ago.

The virtual system will not be available to customers who purchase this vehicle in the United States. US regulations require cars to have real side mirrors. Audi customers elsewhere will be able to take full advantage of this new technology in which Samsung plays a crucial role.