I wasn’t keen on switching to the Galaxy Note 8. I’ve gone from loving things like the productivity the S Pen enables to enjoying the more basic elements of a smartphone, and battery life has figured highly on my list of important features on a flagship. Samsung, for the most part, has done a good job of keeping up, not counting the Galaxy S6 and S6 edge, which had horrendous battery life. The Galaxy S8+ continued the streak, but Samsung decided to reduce the battery capacity on the Note 8 compared to the S8+ in order to make space for the S Pen.

I’m not going to buy the Galaxy Note 8. Instead, I’ll be using the review unit provided to us by Samsung India as long as they let me keep it (unfortunately, here in India, companies don’t let us keep review units, a limitation that extends even to a fan site like SamMobile). As I said at the beginning, I wasn’t keen on switching to the Note 8 as my primary device, and the smaller battery was the main reason I thought I’d keep using the S8+. But I’ve been using the Note 8 for almost a week at this point, and I have to say I’ve been surprised by its battery life, even with two SIMs active.

If you’ve read Galaxy Note 8 reviews on the web (ours has been delayed, but it’s coming), you will have read that it has very stable battery life and manages to offer similar endurance every day. For some reason (most likely extra optimization), the Note lineup has always done more with the same battery capacity compared to a Galaxy S flagship. The Note 8, while not a long-lasting device, has offered folks impressive battery endurance, and even in dual SIM mode, my unit has lasted quite long since the first full charge. 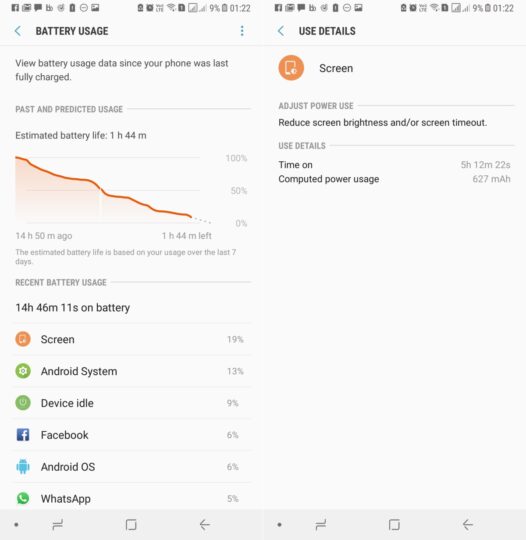 The stats I’ve posted here won’t look like much to those who expect their flagship phones to last through to the next day. But, considering the Note 8’s hardware and its battery capacity, they are quite good, especially when I compare them to the S8+ that I’ve been using the last few months. In fact, I’ve never seen more than four hours of screen on time on my S8+ (in dual SIM mode). Not even with continued and prolonged usage on the first couple of days, which usually fetches higher screen on time as less battery is wasted in idle. The stats in the second screenshot (the one below) involved idle time overnight on Wi-Fi and nearly four hours of idle on LTE in a low-network area, so screen time isn’t that high, but it would have been if it hadn’t been for the idle drain while I was asleep. 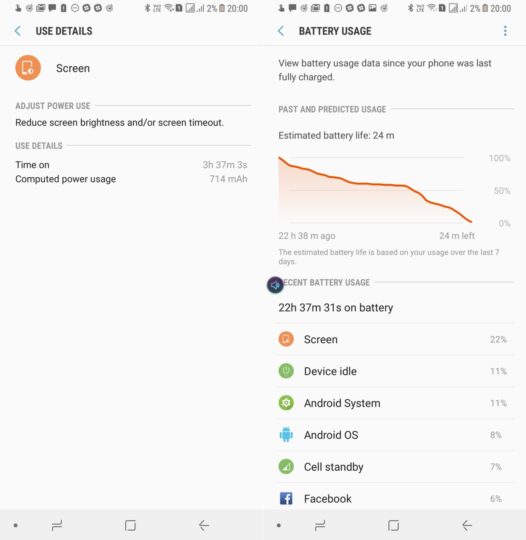 I will admit that my usage doesn’t involve anything other than sharing memes on Facebook (an awful lot, a habit that isn’t doing my eyes any favor), chatting on WhatsApp, browsing now and then on Chrome, and checking Slack and three email accounts for work multiple times over the course of a day. Most of it is done on Wi-Fi, but a few hours are sometimes spent on LTE. But my usage pattern does remain constant across all devices, and the Note 8 has done a better job in my eyes compared to the S8+. I should say I’ve also played with the Note 8 camera much more than I did with the S8+’, trying to get that perfect Live Focus shot and zooming in on things I don’t really need to capture up close.

It’s likely my battery life figures won’t remain the same a few months down the line, but given Samsung’s new batteries don’t lose much of their charge retaining capacity even after a year, they may not worsen dramatically. However, I would like to point out that this also makes me realize that the Korean giant’s primary flagship line isn’t getting the same kind of optimization that we see on Note devices, which, after all these years, is rather disappointing. Perhaps the productivity-focused agenda of Note phones is what makes Samsung put in the extra effort, but whatever the case might be, I’d say that you shouldn’t be holding back from grabbing a Galaxy Note 8 if you’re concerned about the not-so-big battery.