The Galaxy S8 and the Galaxy S8+ are two of the most feature-packed and powerful smartphones released this year. It is powered by a 10nm, 64-bit octa-core processor (Exynos 8895 in most markets and Snapdragon 835 in China and Norther America), 4GB/6GB of RAM, and 64GB of fast UFS 2.1 internal storage. Both chipsets come with powerful GPUs – Mali-G71MP20 (371.2 GFLOPS) in the Exynos 8895 and Adreno 540 (576 GFLOPS) in the Snapdragon 835 – that are more than enough to drive those beautiful high-resolution Infinity Displays. The phones ace most of the synthetic benchmarks, be it CPU or GPU related tasks. However, the age-old Samsung problem still exists: UI fluidity.

Samsung may have made a futuristic-looking, shiny UI for the Galaxy S8 and S8+, but that hasn’t improved software fluidity. Don’t get me wrong. Even the heaviest of apps and games open fast and run without breaking a sweat, but I still notice lag here and a dropped frame there from time to time. For example, I can see a lot of dropped frames when opening the app drawer or while accessing the notifications bar. Moreover, the phone gets stuck for a couple of seconds when it connects to Wi-Fi or cellular data. I’ve noticed that Google apps particularly experience a lot of stutters compared to other phones, and the Gboard keyboard even misses keystrokes.

In comparison, the Google Pixel, the recently released LG G6, as well as the OnePlus 5 perform much smoother. If you don’t believe me, just activate the Profile GPU Rendering (Developer Options > GPU Rendering Profile > On Screen As Bars) option on your S8 or S8+ and see how many bars cross the safe green line. The taller the lines, the worse the scrolling performance. Of all the current generation high-end phones that I have used (and I’ve used most of them), the Galaxy S8 and S8+ have the worst performance when it comes to scrolling and smoothness of UI. Even though the LG G6 and the Google Pixel have the previous-generation Snapdragon 821 processor, they fare better in this regard. Much cheaper phones from Xiaomi have a smoother UI as well.

Here are rendering profiles for the Galaxy S8+, LG G6, and the Google Pixel (from left to right) in their settings menus (the screenshots were taken after scrolling up and down a few times): 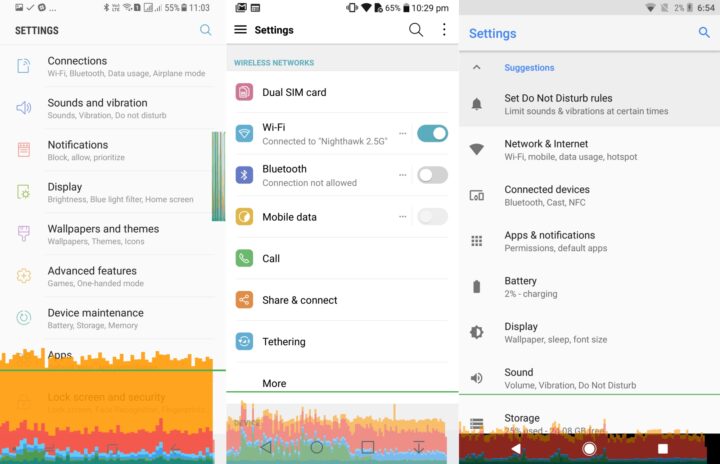 Why is it that Samsung, with all the raw power in its reach, can’t make a phone that can just scroll without hiccups and have a consistently smooth user interface? And this isn’t the first time this has happened with Samsung smartphones. I’ve used the Galaxy S6 edge, Galaxy Note 5, and the Galaxy S7 edge in the last two years. I am now using the Galaxy S8+, and it’s the same story with Samsung year after year. The Galaxy Note 5’s performance was the smoothest of all. The Galaxy S7 edge was pretty smooth too when I first started using it, but then its performance degraded month after month. The phone received a new lease of life with the Nougat update, but the performance once again started degrading after a few weeks.

Samsung has perfected the art of hardware design. But it needs to do a lot better in terms of software. The South Korean smartphone giant might have changed the name of its version of Android from TouchWiz to Samsung Experience, but it needs more than a name change and a spray of paint. It needs to be built from the ground up. Even though Samsung offers hundreds of useful features (SideSync is one of my favorite features), it’s not enough. We have come a long way from the days of the Galaxy Note 4, but the company still needs to work on making its user interface smoother and increase software stability. In my opinion, it is the only area where Samsung is lagging behind others, and it just doesn’t feel right, especially on devices that cost nearly $1000 in some markets.