The latest figures from International Data Corporation (IDC) show that the global smartwatch market declined by 51.6 percent in the third quarter of this year. A total of 2.7 million units were shipped in Q3 2016 as opposed to 5.6 million units during the same period last year. The research firm’s report reveals that Samsung is third on the list of top smartwatch vendors having shipped just 400,000 units. Apple is on top with 1.1 million units followed by Garmin in second with 600,000 units.

This doesn’t mean that Samsung is having trouble convincing people to buy its smartwatches. Its brand new smartwatch – the Gear S3 – was only announced in the third quarter of this year and is yet to be released. These figures only include shipments of the aging Gear S2 and it goes without saying that many are just waiting for the Gear S3 to be released. Samsung hasn’t provided a confirmed release date as yet but it did say recently that the Gear S3 is going to be out by mid-November. The Gear S3 is a refinement of the Gear S2 which is already a good smartwatch so it’s very likely that we’ll see a change in fortunes for Samsung in the global smartwatch market when its latest and greatest smartwatch is actually released. 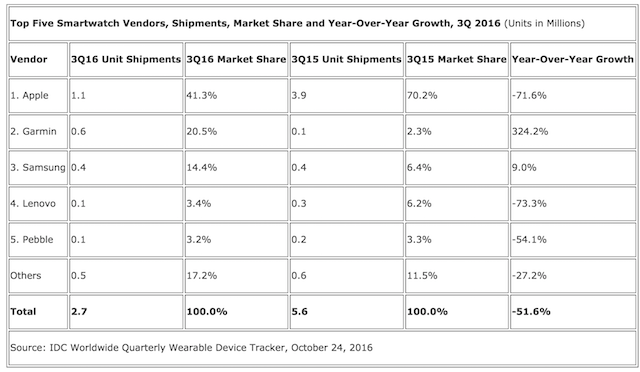 More news »
Samsung shares tips to achieve healthier lifestyle, higher productivity using Galaxy Watch By Asif S.|2 months ago
Gear S3 and Gear Sport update brings Bixby, some Watch Active 2 features By Abhijeet M.|2 months ago
Bixby is coming to the Gear S3 and Gear Sport in the near future By Adnan F.|3 months ago
The Gear S2 is getting improved battery life in surprise firmware update By Mihai M.|5 months ago
SamMobile Shop
Opinions More »
Galaxy A51 5G is Samsung’s best gaming mid-ranger but there’s one issue
1 day ago