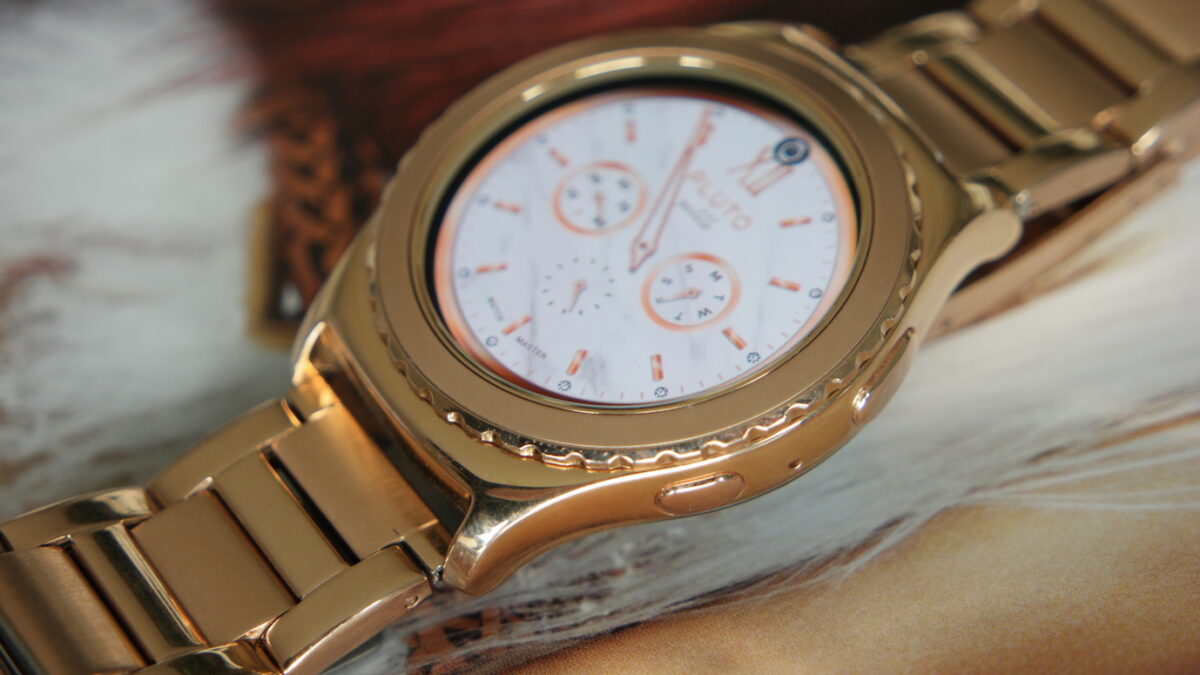 Watch By Kirsten B.

Before I got the Rose Gold Gear S2 Classic , I was not a fan of watches. I bought one a few years ago, wore it a few times, and after a short while I didn’t look at it again. Why wear a watch when I have my phone with me all the time?

When my boyfriend started wearing smartwatches, I laughed at him. He was just like me, unused to wearing watches. And his watch didn’t look like something you see at the jewellers. The watch bands were made of plastic or rubber, and the screen was a square instead of a circle. Some people called it a sporty look, but I just didn’t think it was pretty.

But when he switched to the Gear S2 Classic, I started to see the benefits of a smartwatch. The rounded screen and ribbed bezel looked way better than previous smartwatches. This one looks almost like a normal watch, especially after he bought a metal watch band. At that moment, I was kind of jealous, and when he showed me a picture of the 18K Rose Gold Gear S2, I was sold. I wanted one, and I wanted it right then.

The only thing was, I was using an iPhone, which didn’t work with Samsung’s smartwatches. So I made a decision and after six years, I switched from my iPhone 6 to the Pink Gold Samsung Galaxy S7 edge. A big change, but quite worth it, as I wrote in my review of the device. 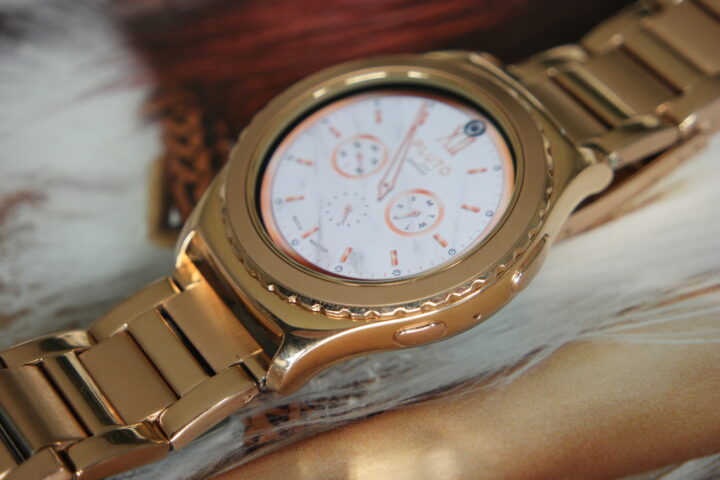 I was over the moon when I received my Gear S2. The watch was just like I expected. It came with a white leather watch band a special charger. But I only had eyes for the shiny rose gold color and the perfect way it fit my wrist. It’s not too big, it’s not small, it’s just perfect.

After wearing it for a few days, the first thing I noticed was that the white watch band had turned black. It wasn’t hard to wash this dirt off, but the watch band didn’t become any prettier after doing so. I was kind of disappointed as the dirty watch band ruined the look of my pretty watch. I had to make a decision: order a metal watch band and spend more money on my week-old watch?

I chose to go to the jeweller where Danny bought his metal watch band and ordered one in rose gold, as it was otherwise kind of a waste purchasing this watch. Fortunately, the moment the new band arrived, all my disappointed faded away. The band gave my watch a totally new, and better, look. I work in a bridal shop and I receive complements about my watch every day. One of my clients actually said it looked just like a Michael Kors watch! 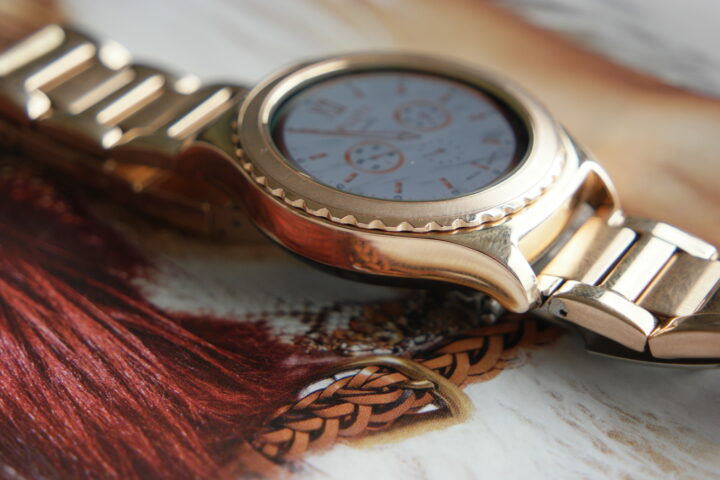 Besides the pretty look, the watch has more assets for a sales employee in a bridal shop. First, the notifications I receive on my watch. I can’t have my phone with me all day long. Most of the time, it stays in my handbag when I’m at work. So it’s a big plus for me that I can read my messages and dress a bride at the same time. I can’t check my phone all day long if somebody needs me. But I can check my watch and decide if a message is important or if it can wait.

Secondly, I think the pedometer is a big plus. Because of my work, I stand all day long and walk a lot. It’s always fun to see how many kilometers you walk during a working day. The pedometer is a part of S Health and you can also add more functions of the app to your watch. For example, the water and caffeine intake options. I don’t use them, but it’s definitely a good thing to be able to manage how many glasses of water you drink over the course of a day.

The last big plus is the quality of the metal and glass. I often scrape the watch against walls or doors at work (accidentally, of course); at the moment of writing this article, I have been wearing my Gear S2 every day for more than two months, but there are no scratches or damage to see on the watch. It means the quality of the watch is really solid. 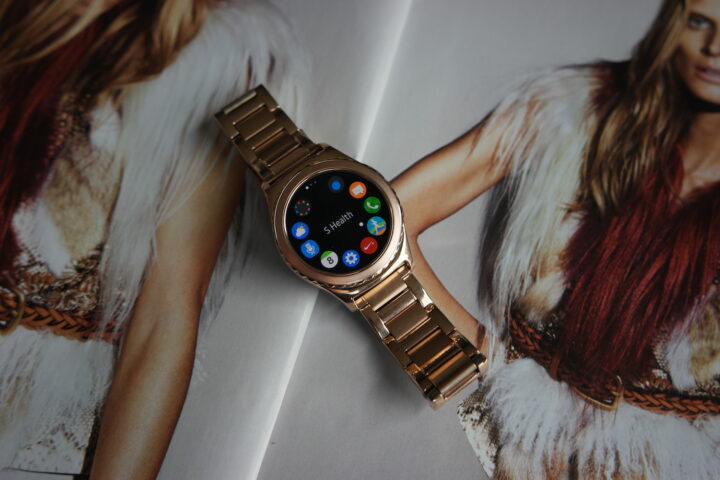 While I’m a big fan of my Gear S2, there are also a few downsides. In my opinion, the battery life isn’t very good. When I’m working, it has to be fully charged otherwise it can often be dead by 4 o’clock. And that’s when I set the brightness of the screen to 4 (it goes up to 10). I can set the watch on airplane or power saving mode, but then I can’t use the watch like I normally do. I don’t know why the battery drains so quickly, but it seems it has nothing to do with the color of my watch face. Hopefully, a software update will help, or my particular Gear S2 has a hardware issue.

Talking about watch faces, I think it’s a pity there are so few watch faces that match the Rose Gold hue of my Gear S2. In the beginning, there were a maximum of five matching watch faces. There are a few more nowadays, but still not enough when you compare it to other colors of the Gear S2. Again, it’s a pity, especially for someone like me who loves changing watch faces all the time.

Overall, I think my Gear S2 is great. Okay, so I was disappointed that I had to spend more money on the watch band, but the watch did look better because of the same. The benefits truly do outweigh the disadvantages, and after two months, I can’t imagine a working day without my smartwatch. I miss it when I don’t have it on my wrist, and I have to say Samsung has done a marvellous job.