Not alone: the Galaxy S7 and Galaxy S7 edge, along with the LG G5, have a notification shade shortcut 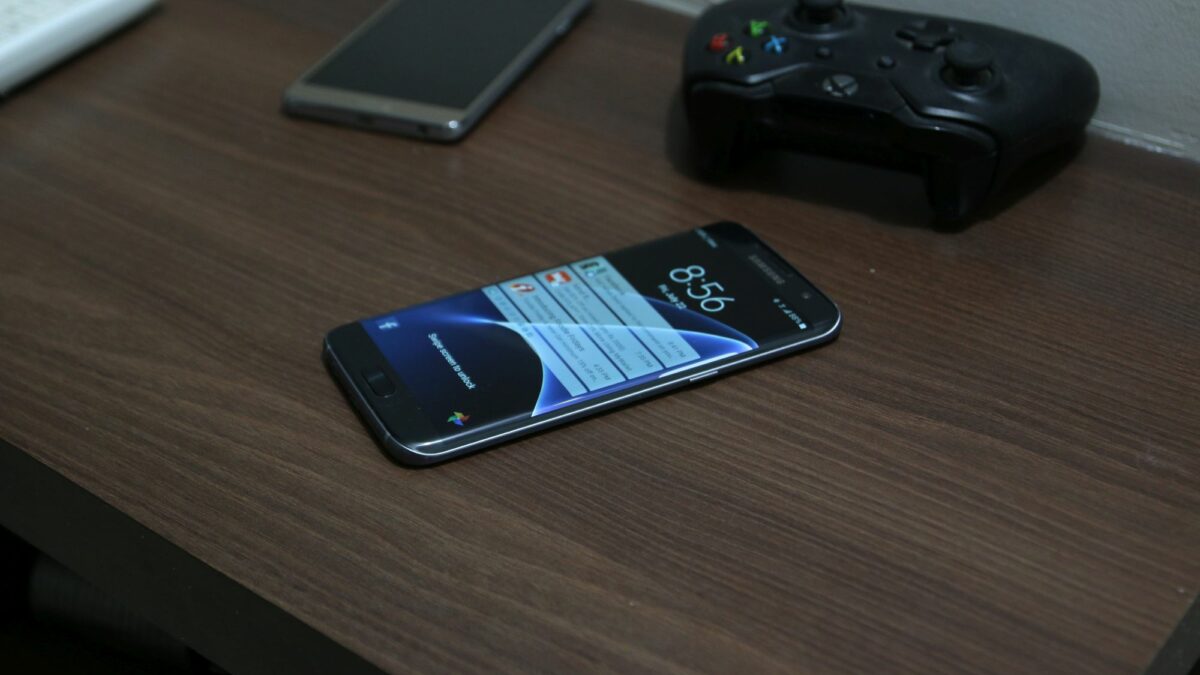 LG has for years let users add a fourth soft button (along with the standard set of three navigation buttons) to bring down the notification shade. Huawei’s P9 has that feature too. But you still can’t do this one [sic] a myriad of phones, from the HTC 10 to Samsung Galaxy S7. So if you’re on those phones and you want to check for any missed calls or Instagram likes, you have to use a second hand or streeeeetttch that thumb (Ben Sin, “LG’s Software Is More Functional Than All Other Android Skins, Including Stock.” July 3, 2016, Forbes).

I’ve had the pleasure of spending the last several weeks with the LG G5, and have been able to experience a UI different from that of Samsung’s TouchWiz. Sure, it can be said that LG’s UX has some things I’d like to see in TouchWiz, such as the brightness number percentage (35% brightness, for example), as opposed to a brightness adjuster that only lets me approximate a level without any numerical indication whatsoever), but I’ve also discovered that Samsung’s TouchWiz UX is more functional than many give it credit for.

Such is the case with an individual who recently took to writing about how he prefers the LG UX over all others. Sure, when it comes to stock Android, I likely agree with him (and that’s no small thing for a diehard Samsung fan to say), but I take issue with the individual’s claim, cited above, that Samsung’s TouchWiz has no “soft button to bring down the notification shade.” Sure, it can be said that there is no software button on-screen that matches the LG notification button, but Samsung does have a software button of its own that, once enabled, floats around the mobile experience with you on every page and website that does pull down your notification shade.

First, let’s find out where this soft button is. Next, we’ll discover how to enable it and see exactly what it does.

Have you ever heard of “Assistant Menu”? It’s a feature within TouchWiz that has been present since at least 2014 with the Galaxy S5 that lets you navigate the entire experience with an on-screen control panel of buttons. You can enable the notification shade shortcut and software control panel (as I call it) on the Galaxy S7 or Galaxy S7 edge by going to Settings -> System -> Accessibility -> Dexterity and Interaction -> Assistant Menu. Once you tap on Assistant Menu, be sure to toggle the feature on at the very top of the Assistant Menu page.

If you take some time to examine this feature, you’ll notice that a blue circle with a white square appears on the screen. Tap on it, and the circle opens to present a white square with blue buttons that let you control lots of functions within TouchWiz: 1) cursor, 2) More Options, 3) Volume, 4) screen lock, 5) screenshots, 6) easy pinch zoom, 7) Open phone options, 8) Menu settings, 9) Magnifier Window, 10) Recent apps, 11) Home Screen, 12) Back,  and13) Notification panel (remember? This is the feature that the individual said didn’t exist within TouchWiz; and yet, it’s here).

The notification panel also works well within web pages, allowing you to view tabs and the task manager should you need to with just one tap, so it’s not just designed for interaction with apps on your phone desktop.

The notification panel shortcut button allows you to pull down the notification shade when you tap it. Sure, it doesn’t look like LG’s, but it is a software button that does the exact same thing. And, contrary to the individual’s claim, this feature has been in Samsung’s TouchWiz since at least the Galaxy S5 if not earlier (I have a Galaxy S5 as well and can verify the feature’s existence within earlier TouchWiz UX versions). Assistant Menu is present on the Galaxy S6, Galaxy S6 edge, Galaxy S6 edge+, Galaxy Note 5, Galaxy S6 Active, Galaxy S5, and Galaxy Note 4 – and could very likely have long existed on earlier Galaxy models.

This post was written to tackle a claim made against Samsung, and it did just that. I’ve shown here that the claim itself is erroneous, that Samsung has had a software button to pull down the notification shade for at least 2 years in its software. With that said, we continue to speak to fellow journalists and tech sites about the need for accuracy.

There is nothing wrong with those who prefer LG over Samsung (we understand that everyone has their preferences), but we’d call arguments such as the one above “straw-man” arguments that attempt to set up one company’s phones with a false argument that’s designed to shoot them down without giving them fair opportunity. Contrary to the individual’s claim above, the Galaxy S7 and Galaxy S7 edge do provide something of a notification shade pull-down shortcut that works in the exact same fashion as that found on the LG G5, a phone which I also own, as well as other LG phones from years past.

In the end, it pays to do due diligence before going public with claims such as these. There’s no harm in preferring a brand over Samsung. There is harm, however, in trying to make another brand “glow” by throwing dirt on Samsung and making claims that simply aren’t true. In addition, this post has also accomplished something that I love: that is, it gives consumers one more reason to believe that Samsung’s Galaxy S7 and Galaxy S7 edge can roll with the best of ’em – if not best ’em.