We got our hands on the fast wireless charging stand from Samsung and used it with the latest Galaxy flagships, and here’s what we think of the company’s newest proposition for convenient smartphone charging.

The standing charger has a simple and clean design, and the black unit we have looks pretty nice sitting on the desk. The front is made up of three concentrated circles – the center has a fully black charging plate with the Samsung and Fast Charge logos. The back is mostly plain, with small holes for dissipating heat. The entire thing stands on a round plate that juts out a bit at the front for you to put the phone on the charger. The microUSB input that powers the charger is at the bottom of this plate at the back. 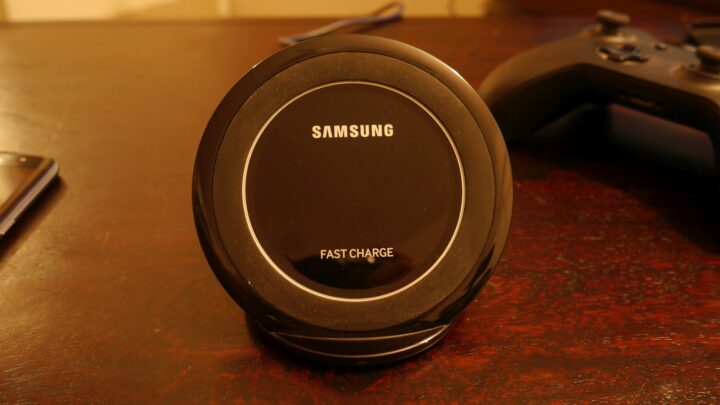 An LED sits at the front, which goes blue when a device is charging and green when charging is complete. The charger is pretty light – it feels sturdy enough when you set it down, though putting your phone on top will make the charger wobble a bit. Overall, Samsung’s standing fast wireless charger has an appealing look – if you liked the regular Samsung wireless charger, you are going to like its standing successor as well. Just keep the dust clear, as it tends to stick to the thing quite easily (something you will notice in our photos). 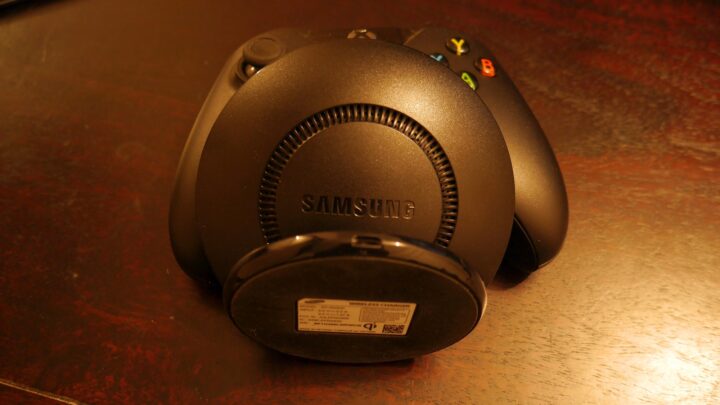 Wireless charging is a slow process, and Samsung claims its fast wireless charger is 1.4x faster than regular wireless chargers. The claim is true we guess, but actual charging times are still rather long compared to wired fast charging. The Galaxy Note 5 took a little over two hours to reach full charge, while the Galaxy S7 edge takes a little over two hours and a half to reach 100 percent capacity. Samsung claims exactly 150 minutes of charging for the S7 edge, but that doesn’t take into account the fact that you might be using the phone now and then while it is charging.

The thing is, using the device while it is on the standing charger is very convenient. On a regular wireless charger, you can’t really use the phone without picking it up – the biggest issue is pressing the navigation buttons, as the phone dangles in the air from the top and bottom. On the standing charger, this isn’t a problem and you will have no trouble operating your device. The charger might move back a little when you press the home button, but otherwise this charger is well designed to make both charging and device usage possible at the same time. 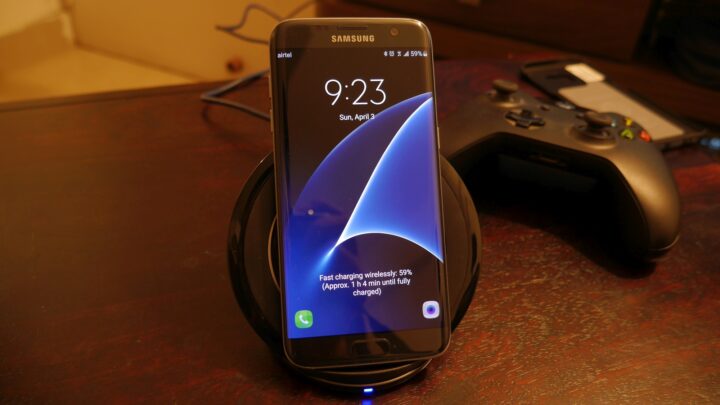 Also, you don’t have to be precise while placing your phone on the charger – as long as it is somewhere in the middle of the charging pad, you’re good to go. On the regular Samsung wireless charger, it’s a major annoyance, as you have to place the handset properly from every angle. Keep it too high, no charge. Keep it too low, no charge. In the “drop your device on the charger and forget about it” facet, the standing charger is miles better.

To be honest, the fast wireless charging stand is more about the convenience than quickly topping up your device’s battery without the involvement of any wires. It fixes the biggest flaw of regular wireless chargers: you don’t need to disrupt charging to use your phone (well, unless you get a call and must put the phone to your ear). Charging is faster than normal wireless charging as well, but it still can’t match the charging times offered by wired fast charging.

But for when you have a lot of time, the standing wireless charger is great to have. It’s especially good when you are charging your device overnight by your bed – turn on Always On display and you have a nice little bedside clock that will give you a fully charged device when you wake up. It’s too bad Samsung doesn’t offer an option to turn on Always On display only when the phone is charging, since having the feature on otherwise can take its toll on idle battery life.

Samsung’s fast wireless charging stand will cost you $60 or its equivalent, at least if it is available in your market. For anyone spending a large part of the day working at a desk, the charger makes a lot of sense. For everyone else, the price might be a tad too high, so its value depends on your want/need of the convenience of wireless charging.

Disclaimer: Mobile Fun is our exclusive accessory partner for Samsung devices and supplied us with a review unit. The partnership with the retailer in no way affects our thoughts on the product reviewed above; our opinions are completely our own.