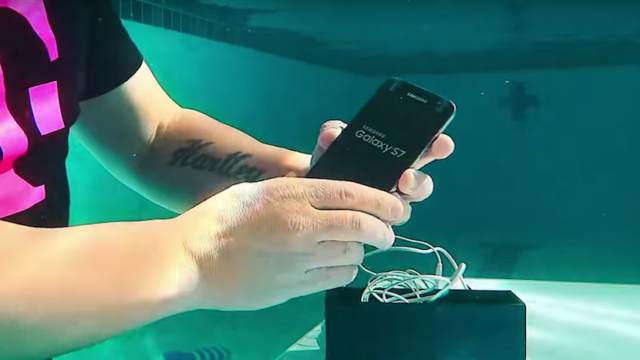 Now that the Galaxy S7 and the Galaxy S7 edge have been officially unveiled I’m sure many of you will be heading over to YouTube to watch hands-on reviews and unboxings of the new flagships. There’s an entire community built around unboxing handsets as that’s one of the things people like to see before they decide to purchase a new handset. T-Mobile is getting in on the unboxing craze as well but with a unique twist, it has uploaded a video in which the Galaxy S7 is being unboxed underwater.

It actually makes perfect sense for T-Mobile to do this since the Galaxy S7 and the Galaxy S7 edge both are water resistant up to 5 feet for 30 minutes. It’s a fun little video in which we get to see @askdes try to hold on to the contents of the box as they float away. Many of you will be interested in finding out how the handsets perform underwater and in the video they seem to hold up pretty nicely so it looks like you’ll be able to take those underwater selfies very easily. T-Mobile has already confirmed pricing and release date for the new flagships and customers who make a purchase from Magenta will also get a free year of Netflix alongside the free Gear VR headset that’s promised by Samsung to all customers who pre-order the Galaxy S7 or the Galaxy S7 edge.