Samsung is the only major Android manufacturer that has chosen to ignore the Snapdragon 810 and opt for a different flagship chip (one it’s making all by its lonesome), thanks to the 810’s heating issues and the fact that the Korean giant’s Exynos chip is considerably superior. But Samsung has said that it chooses processors according to need and hasn’t given up on the Snapdragon lineup, and the company might just be gearing up to launch its first device to be powered by the Snapdragon 808.

The Snapdragon 808 is a hexa-core chip that slots in somewhere between the Snapdragon 805 and the Snapdragon 810, and has none of the heating issues of the latter. It’s the chipset LG has chosen for the G4, its 2015 flagship, and while it might not be as powerful as the 810 or the Exynos 7420, it’s certainly a high-end chipset that can tackle everything you would throw at it. That would make the SM-G9198, which has appeared out of nowhere on the GFXBench benchmark database with a 4.6-inch display, a small yet formidable powerhouse of a device.

There’s no telling what this device is, but its specs – a 1.8GHz Snapdragon 808 SoC, a 4.6-inch, a 16-megapixel camera, 2GB of RAM, 16GB of internal storage, a 5-megapixel front-facing camera, and Android 5.1.1 – suggest it could be a spin-off of the Galaxy S6. It could possibly be the Galaxy S6 mini, and if that is indeed what this device is, then we could finally see a powerful mini version of Samsung’s flagship, something none of the previous mini smartphones managed to be. 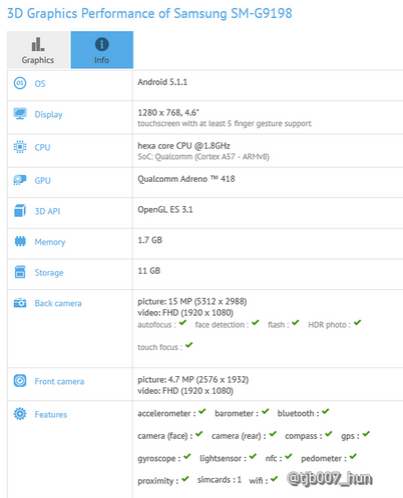