A new entry-level Android smartphone from Samsung has broken  its cover on the Indian online retailer’s website. Flipkart has prematurely listed the Galaxy Core Prime on its website with a price tag of INR 8,499 which translates to about $138 or €110. The device is quite similar to the Galaxy Core LTE and the Galaxy Core Lite LTE. It features a 4.5-inch WVGA PLS LCD display, runs Android 4.4 KitKat, and is 8.8 mm thin. It is equipped with a 5-megapixel primary camera with LED flash, autofocus lens, 1080p video recording, and a 2-megapixel front-facing secondary camera.

The Galaxy Core Prime is powered by a 1.3GHz quad-core processor of unknown make coupled with 1GB of RAM and 8GB of ROM. The storage capacity can be expanded by a microSD card slot (up to 64GB). As per the information available on the website, which is yet to be confirmed by Samsung, the Galaxy Core Prime would have a single SIM card slot (GSM – 900MHz, 1800MHz), though we would not be surprised if Samsung releases a dual-SIM version of the device. There are accelerometer, proximity sensor, an ambient light sensor, and a 2,000 mAh battery. 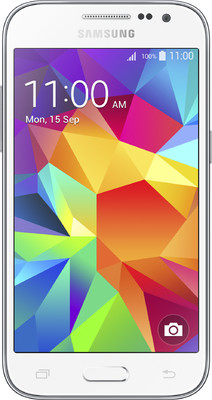 Flipkart, the most popular online retailer in India, is celebrating ‘Samsung Week’ by offering discounts on a handful of Samsung smartphones. The store is offering exciting deals on the Galaxy Note 4, Galaxy S5, Galaxy S4, Galaxy Core Prime and the Galaxy On series. The Galaxy Note 4 is being sold for just INR 29,990, which […]

When Samsung released one of its entry-level smartphones, the Galaxy Core Prime, late last year with Android 4.4 KitKat onboard, many thought that it would not receive any major Android update. However, the South Korean smartphone giant surprised everyone by rolling out Android 5.0.2 to the device a few months ago. Now, the Galaxy Core Prime […]