Samsung accused of employing child labor at a Chinese factory

Samsung recently published a report that said that while 59 of its Chinese suppliers weren’t doing everything to meet safety standards, none of their suppliers were employing child labor. However, a New York-based China Labor Watch (CLW) is claiming that Samsung is employing child labor in its supply chain at a factory called Shinyang Electronics in China. Samsung sent in a statement to The Next Web, saying “We are urgently looking into the latest allegations and will take appropriate measures in accordance with our policies to prevent any cases of child labor in our suppliers.”

CLW says that it sent an undercover investigator into the aforementioned factory last month, and uncovered quite a few child workers, with five of them found by only the third day. According to the report, child labor and underage student workers are employed at the factory during busy seasons, with the minors said to work for 11 hours a day for three to six months, without overtime pay and social insurance. In the report, CLW also provides various photos that claim to show child workers at Shinyang.

Preventing child labor has been an enormous task for many major corporations, including Samsung and Apple, and the latest report will likely spark further discussion on just how serious companies are in their attempts to keep their suppliers in check. According to CLW: “For two years CLW has repeatedly exposed the poor labor conditions in Samsung’s supply chain. Samsung continues to fail to implement its own code of conduct and social commitments, and its suppliers as a result continue not to take these standards seriously.” 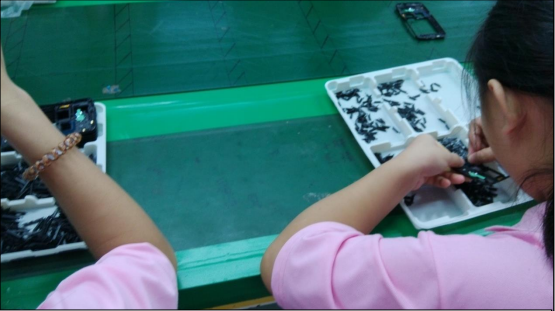