It looks like Samsung is taking some preemptive measures to make sure that its latest flagship, the Galaxy S5, isn’t threatened by competing 2014 flagships. Today, HTC announced the HTC One M8 in the country for a lower price (Rs. 49,990, or about $825) than that of the Galaxy S5’s (Rs. 51,990, or about $860), which has resulted in Samsung dropping the price of the S5 to Rs. 46,881 (about $780). The reduced price is now in effect at popular retailer Flipkart – it only seems to apply to the white variant of the device at the moment, though hopefully that will change soon as the black version is arguably the more attractive color option.

Samsung devices have always seen price drops after a market launch, but this is probably the first instance where a price reduction has happened so quickly. This could have major implications for the HTC One M8’s prospects in India, where the Taiwanese company already finds it hard to find too many consumers due to its usually high pricing strategy, an almost complete absence of marketing, and the fact that its products tend to be more like the iPhone in that their prices don’t come down so quickly. Of course, it is also a major advantage for consumers, who can now get the Galaxy S5 at a much more sensible price than before, though it will irk early adopters who might have saved some cash if they had waited for a couple of weeks. 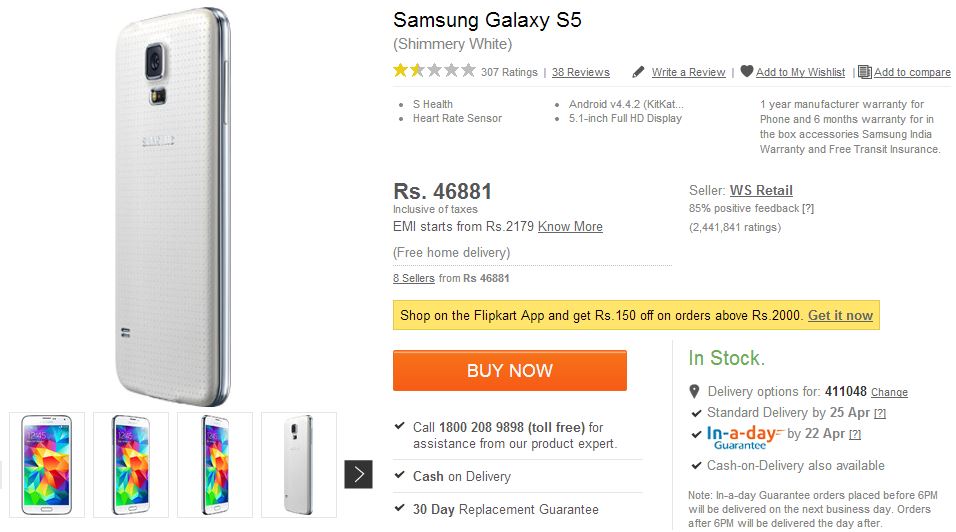