A slew of unannounced devices head to India for testing, Galaxy S5 2K variant among them

Indian import and export database Zauba has listed over ten unannounced handsets that have made their way into the country for testing. The list of devices includes the oft-rumored Galaxy S5 with a 2K screen (SM-G906S and SM-G906K). The SM-G906S model number is for SK Telecom’s version of the handset, and the SM-G906K is for KT. Both carriers are based out of South Korea, so it is feasible that the premium version of the Galaxy S5 will only be available in Samsung’s home market initially. Other unannounced devices on the list include the SM-G800F, which is likely the Galaxy S5 Neo variant. The SM-G870A will be the Galaxy S5 Active, which is set to launch sometime next month. The Ativ SE (SM-W750V) is also on the list, along with the SM-Z9005, which is Samsung’s first Tizen handset. A Samsung official stated in an interview last week that the manufacturer will launch its first Tizen handset sometime later this quarter.

The list also includes commercially available devices like the SM-T335 (Galaxy Tab 4), SM-G310HN (Galaxy Ace Style), SGH-l187 (Ativ S Neo), SCH-I930 (ATIV Odyssey), SPH-I800 (ATIV S Neo) and the SM-G900R4 (Galaxy S5 US Cellular). It looks like Samsung is working on a new accessory for the SM-V700 (Galaxy Gear), as it is also listed on the database. Another device on the list with a model number SM-G313F is listed as a handset, but there isn’t any information available on the device. While most handsets sent to India originated from South Korea, two Galaxy S5 units have been sent from the U.S. Overall, it looks like Samsung is not taking a break after the launch of the Galaxy S5 and is set to launch devices across all price segments. 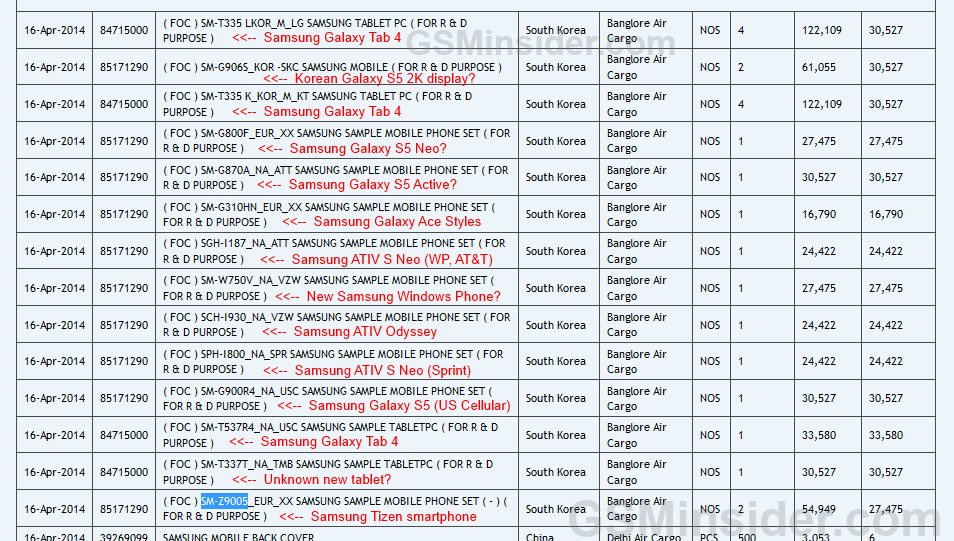 Pre-order the Galaxy S5 Mini in the UK now