Samsung has pushed a major update to its ChatON messaging app, adding a plethora of features and bumping the version to 3.5. The standout feature here is something privacy advocates should love – ChatON now allows users to recall/delete a message they might have sent to a contact, even if said contact has already received or read the message. This seems to be focused at letting users recall messages they send to unknown contacts by accident, though it should also delete the messages from Samsung’s servers. Also included in the update is the ability to transfer files up to 1GB in size, though you’re limited to sending only 5 per day and the feature is only available in certain countries at the moment.

Other features introduced by the update include the ability to share real time location details with contacts through integration with the Glympse location sharing service, hold group chats with up to 1,001 persons, enhanced translation, and support for Arabic, Turkish, Farsi and Hindi for a total of 14 supported languages. It’s a pretty big update that should make for a better experience for all ChatON users, and it can be downloaded either via the Play Store or through Samsung Apps. 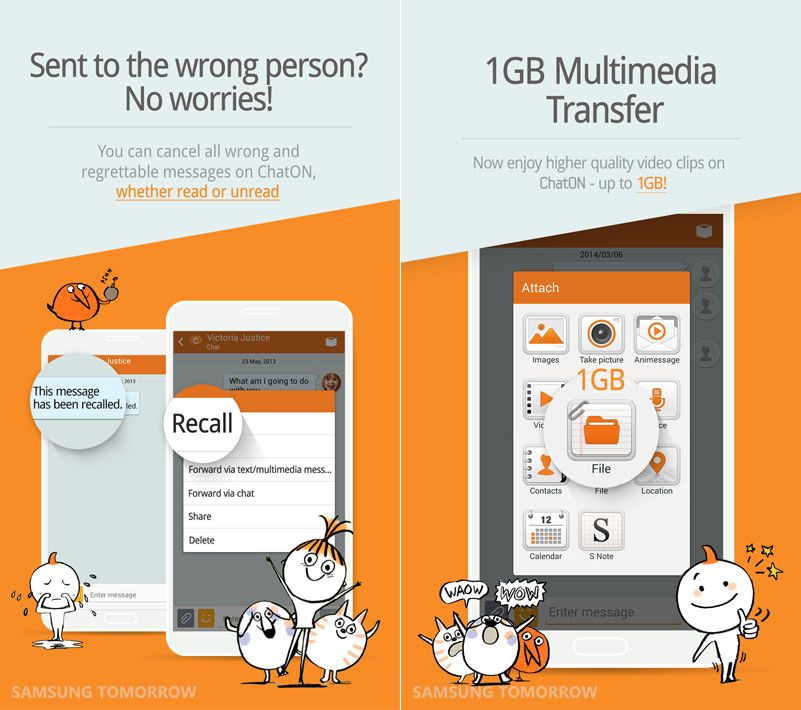 Samsung can’t seem to make up its mind about ChatON, its not so popular messaging service for its Galaxy series of phones and tablets. The company recently refuted a rumor that ChatON was shutting down, but has now said that the service will indeed be seeing its demise in the near future. ChatON will cease […]

Samsung refutes reports of ChatOn being shut down in certain markets

Well, it seems among the many changes Samsung is planning on making to its mobile strategy in coming months, shutting down ChatOn in certain markets as earlier reported isn’t one of them. A report from The Korea Times suggested Samsung will be removing the ChatOn service from certain markets around the world, but the Korean manufacturer has now […]

Samsung is planning to shut down ChatOn service in certain markets

Samsung’s smartphone market share as well as profits are dwindling. In a bid to lower the expenses, Samsung is planning some major restructuring steps in management and plans to shut down certain unprofitable services. According to a latest report from Korea Times, Samsung will soon shut down its ChatOn instant messaging service in certain markets as […]

A study discovered that a majority of Galaxy S users do not appreciate Samsung’s exclusive suite of apps. Samsung has been oft-criticised in the past for bundling a lot of unnecessary and gimmicky features in its handsets, most of which did not work as advertised or were too complex to use. To make things worse, […]

As is the case with every new flagship smartphone released by Samsung, the Galaxy S5 will likely feature numerous new software features to enhance the user experience, and we might just have a glimpse of at least one such feature – built-in conference calls capability (with video support) between multiple persons. A document filed to […]

Google recently added the option to view SMS on a device via the Hangouts app (which was earlier called Talk), a feature that had been requested by Android users for quite some time. Well, Samsung decided it needed to do the same for its own chat app – the Korean firm’s ChatON messaging app has […]