Design
From small to big in only a couple of years, we all use to use smaller mobile phones in the past and since the smartphone arrived mobile phones are getting bigger and bigger. We see this with every brand, even with Apple is doing it now. Samsung introduced their first huge smartphone at IFA in Berlin. Samsung called it the Galaxy Note. Many people called it ugly, to huge and not easy to use etc. Now a year later Samsung announced the second generation of the Galaxy Note with a display size of 5.5 inches. Samsung did this cause the sales of the Galaxy Note 5.3 inch were great. Samsung created a way to make the Galaxy Note II a little bit bigger and with a bigger display. Now this year Samsung will probably announce the Galaxy Note III the follow-up of the Galaxy Note II. As said in our introduction Samsung announced the Galaxy Mega 6.3 a couple of months ago, and the same thing happened with every huge display device. Samsung received reactions about the design and that it will be too big to use. (Samsung just created the middle step from Mobile phone to Tablet).

Back to the design of the Galaxy Mega 6.3. When we saw the Galaxy Mega 6.3 for the first time we though what a huge smartphone! And yes we did used a Galaxy Note II before and after a couple of minutes we started to like the Galaxy Mega 6.3. A display-size of 6.3 inches is great, and the device did feel great in the hands and we will explain why! First of the device feels thin. the front of the device is all about the 6.3 inch display. Samsung added their traditional home button and touch buttons. And of course at the front the camera, level sensors and the speaker, they are on the same place like we know from the Galaxy S4. The Galaxy Mega 6.3 also has a notification LED at the front right besides the speaker. Something we do know from the Galaxy S3 and Galaxy S4. At the right side of the Galaxy Mega 6.3 we find the lock-button and on the left side we find the volume rockers. On the upper side you see the 3.5 plugin, IRblaster (Handy for Samsung’s own application WatchON) and one of the two microphones, on the downside of the device you have a micro USB connection and the other microphone. The back of the device looks very clean and we only see the Camera sensor with LED flash and a speaker at the bottom. All in all the design is a typical Samsung design.

We give the Galaxy Mega 6.3 for its design a 7.0 cause there is nothing special compared with the Galaxy S4 and the bezels in our opinion could be smaller! Probably this is something for the next generation Gelaxy Mega’s! 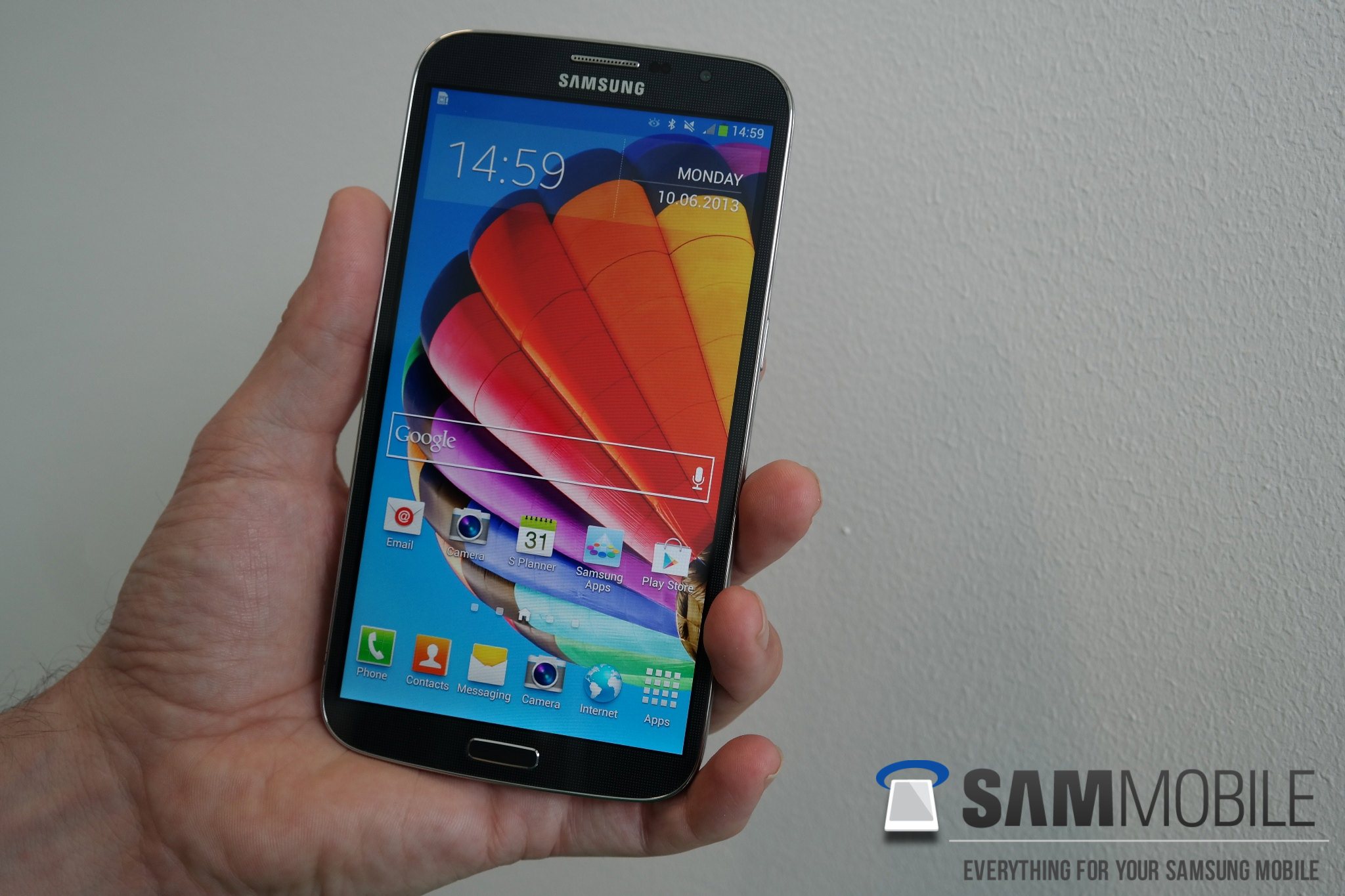 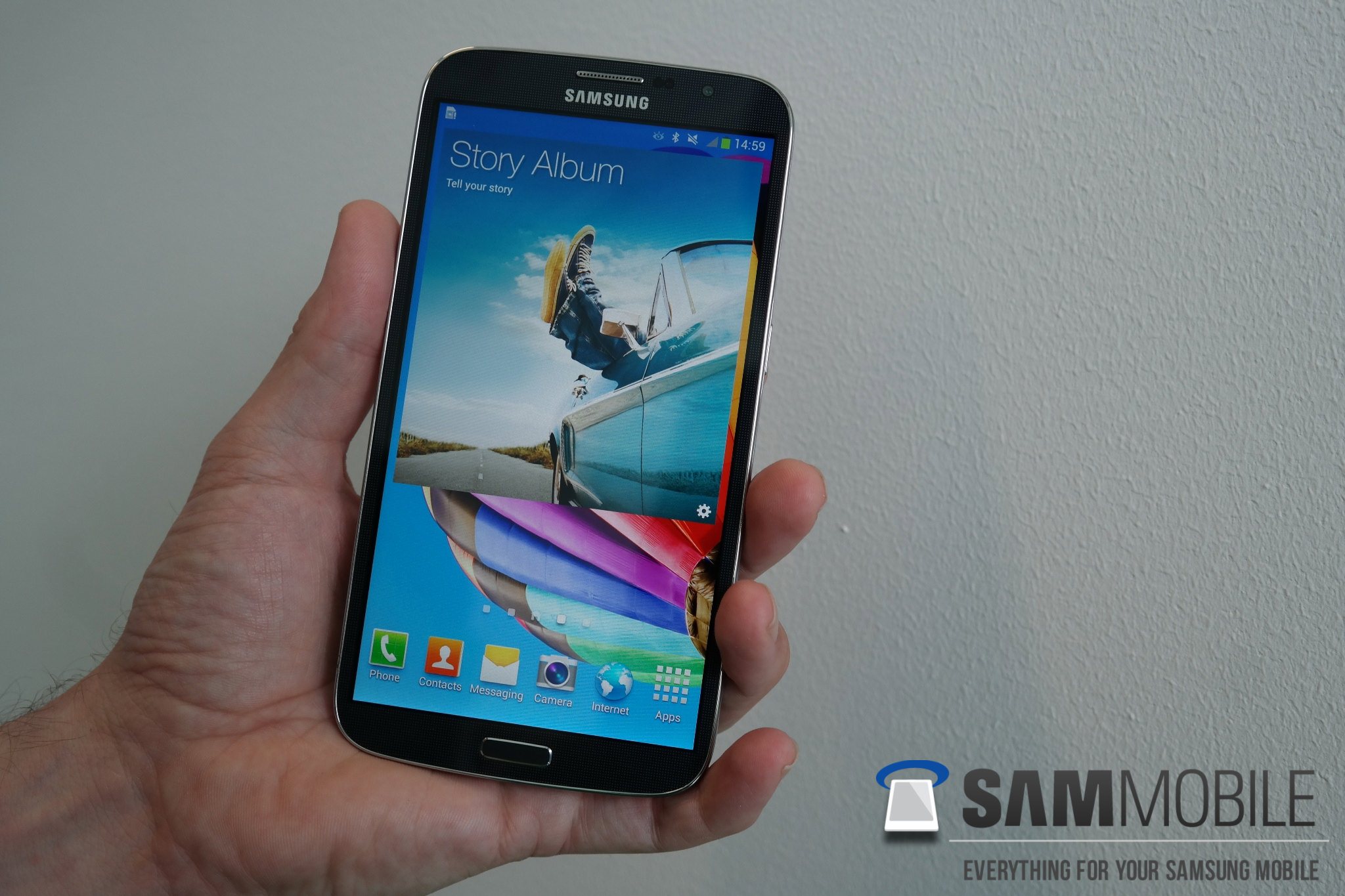 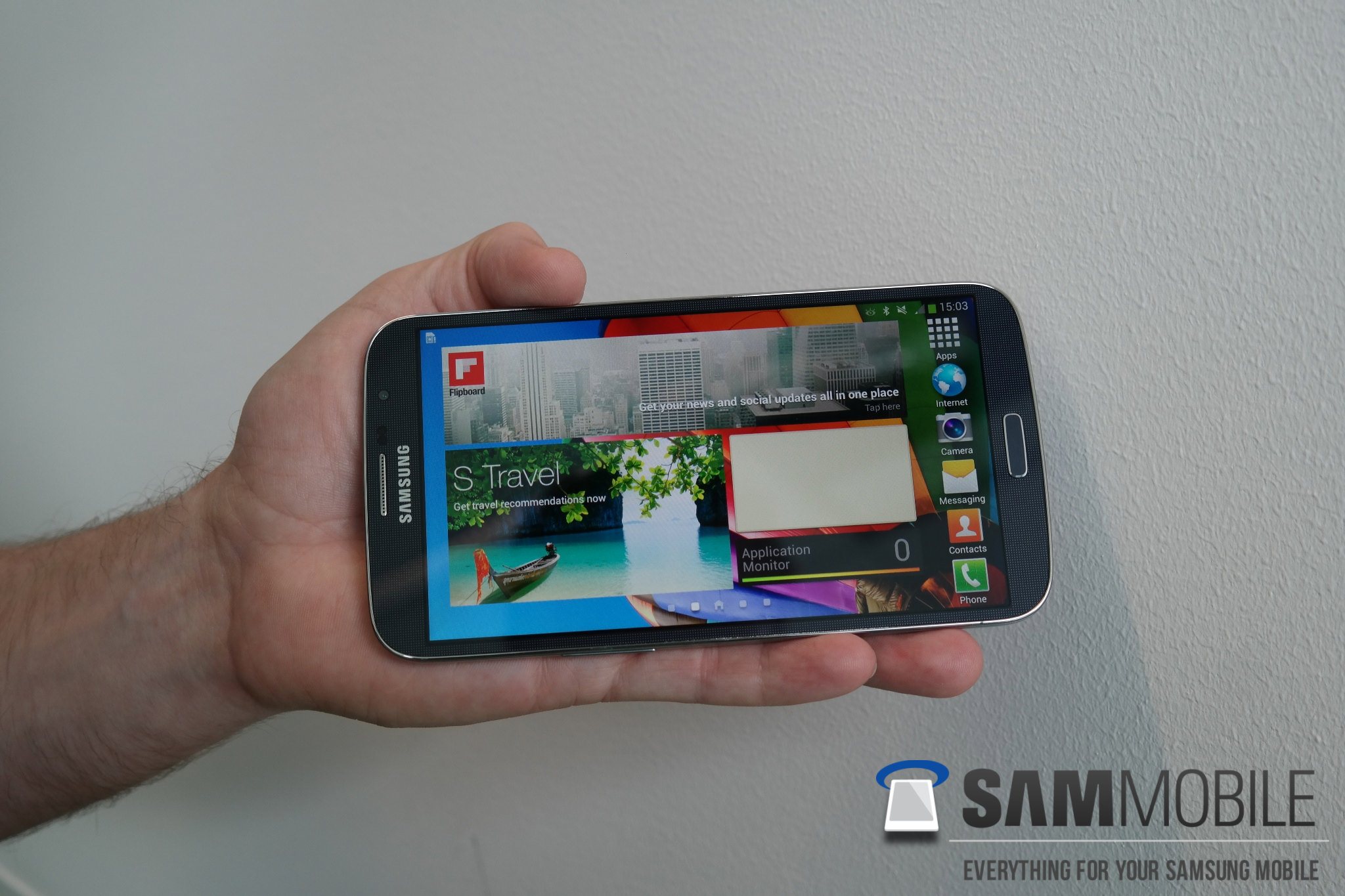 Screen – Multimedia
Yes we are finally at the part what the most people will care about. The Screen! The Display of the Galaxy Mega 6.3 is 6.3 inches with a resolution of 720 x 1280 and with a pixel density of 223 ppi. We would love to see a Full HD LCD display or some huge AMOLED display. But this would mean the price would be to expensive and Samsung couldn’t bring a good follow-up on the first generation Mega devices. The display of the Galaxy 6.3 is pretty nice real and beautiful  and vivid colors, something we really liked! Some minus about the screen is of course the colour black. We as team normally use smartphones with AMOLED panels and that means that the black OLEDs are turned off. And will give you the ultimate black feeling. The black colour reproduction wasn’ that good but for us AMOLED is still the best. We only can hope Samsung will bring more OLED panels to their mobile phones. OLED is in our opinion still the best mobile display tech around.

The display of the Galaxy 6.3 is of course brilliant for playing games, surfing the internet, to watch photo’s or to view videos. We tried to show of the spiral view in the gallery sadly our firmware wasn’t final yet. But we could show off a video! We did the last thing to show you how and there for it wasn’t there. We did show its  display in different viewing angles. Is the Galaxy Mega 6.3 a multimedia device? YES! Watching video’s surfing the internet, view photo’s with a screen as this it is very nice to have a 6.3 inch screen. Everything looks sharp (can be sharper) but based on multimedia functions as video, gallery, internet we have to say: This is the ultimate multimedia device! OK, we did said the same with the Note II and the Galaxy S4.

Yes the display could be better but based on multimedia we couldn’t give the Galaxy Mega 6.3 a lower score than below. 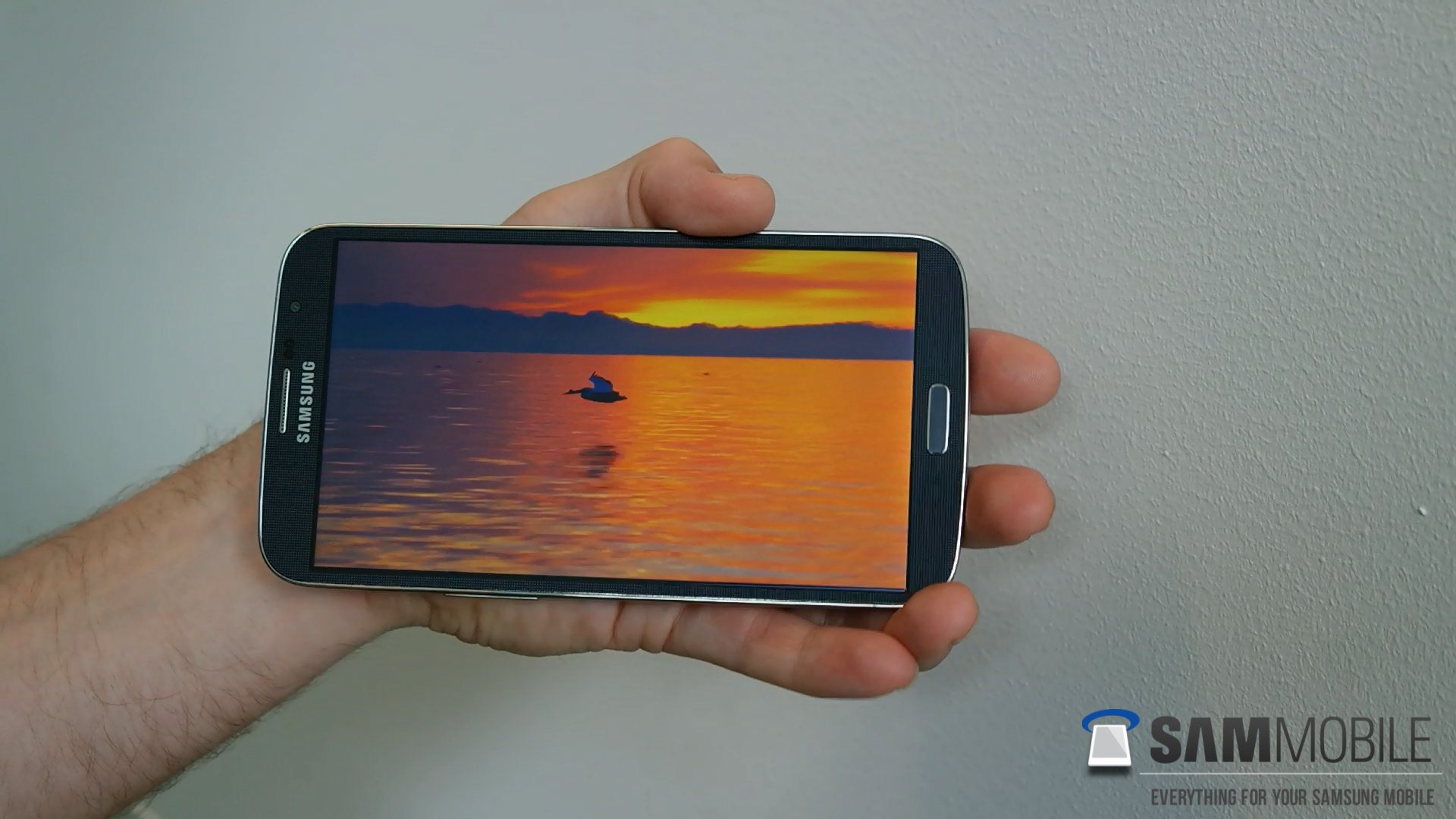 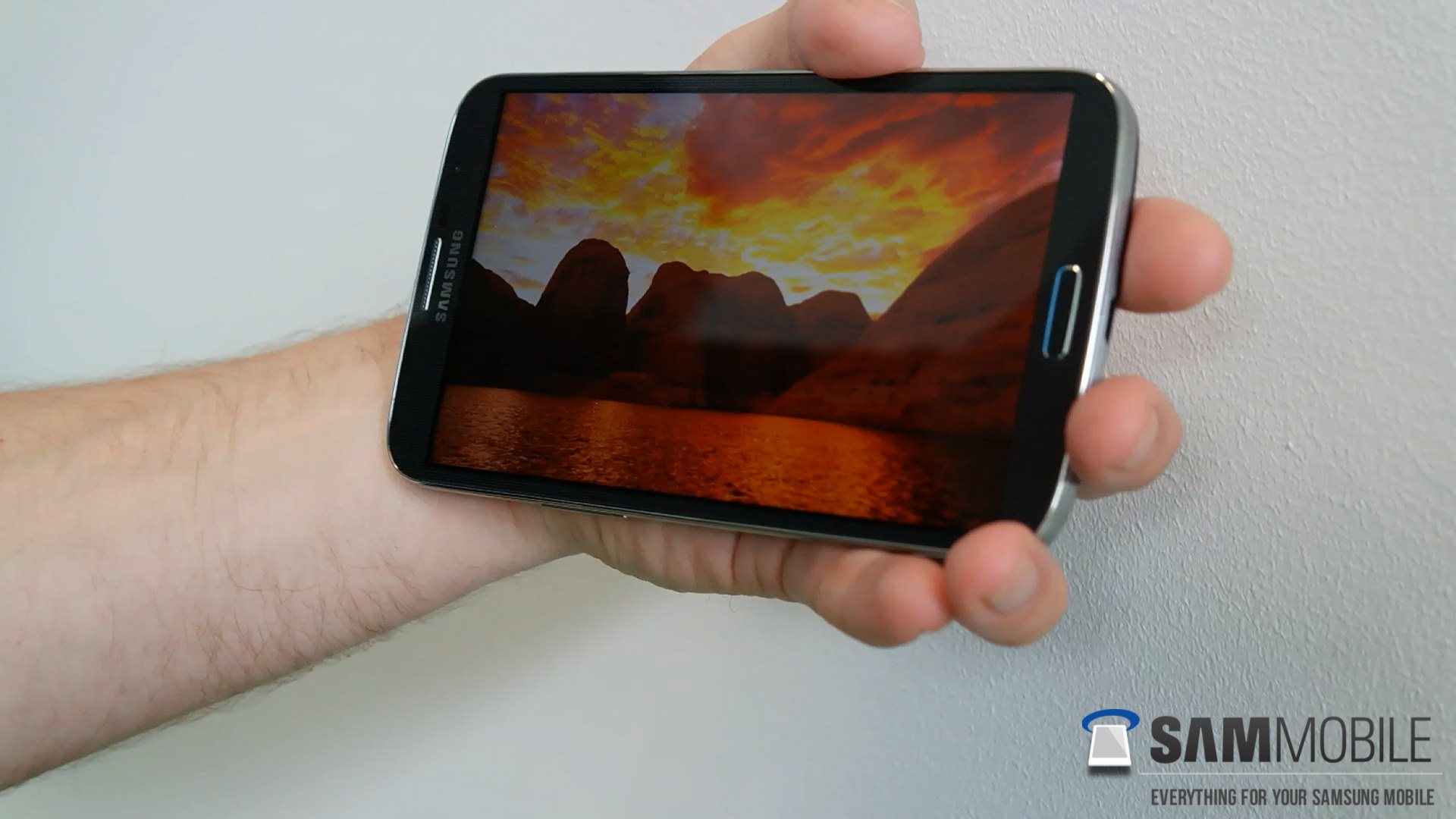 Camera
As with the Galaxy S4 the Galaxy Mega 6.3 uses the same camera functions. Functions as Beauty Face, Best Photo,Continuous shot, Best face, Sound& Shot, Rich tone(HDR),
Panorama, Sports, Night shot are all present on the Galaxy 6.3. We made ourself a couple of photo’s with device. Remember our device has still a pre-release firmware.

Performance
The Galaxy Mega 6.3 uses a dual-core processor clocked at 1.7 GHz. Something for a device with a caliber like this we would love to see a quad-core processor instead of the dual-core processor. Now we need to say our device was on a pre-release firmware. The device had a couple of bugs and wasn’t fast at all. We hope that the final version is OK, but still in our opinion a device like this and based on a ”old” dual-core processor is a big lose for us. Samsung probably thinks everything is next for the next generation.

Conclusion
From little to big, from mobile phone to almost a tablet. Yes the Galaxy Mega 6.3 is a little bit of both, a little tablet but a huge smartphone. We liked to play with the Galaxy Mega 6.3 specially to watch video’s or to surf the internet. As advice we could say: ” if you want to buy the Galaxy Mega 6.3 because you travel a lot… Go for it! This is perfect for people who travel much with the train or plane. For calling with device like this is our opinion that this device is actually a bit to huge. You almost call with a small tablet. Something that looks strange for outsiders (uh we said this by note too owners first too). We believe this need a couple of years before people accept huge smartphones. Like we now accept Galaxy Note sized smartphones! All on all, a 6.3” LCD HD display a 8 megapixel camera with LED flash Samsung’s own easy to use interface called Touch-Wiz and based on the latest version on Android called Jelly Bean. We simple can’t say this device isn’t useful. No it is! But only for the right group of people. 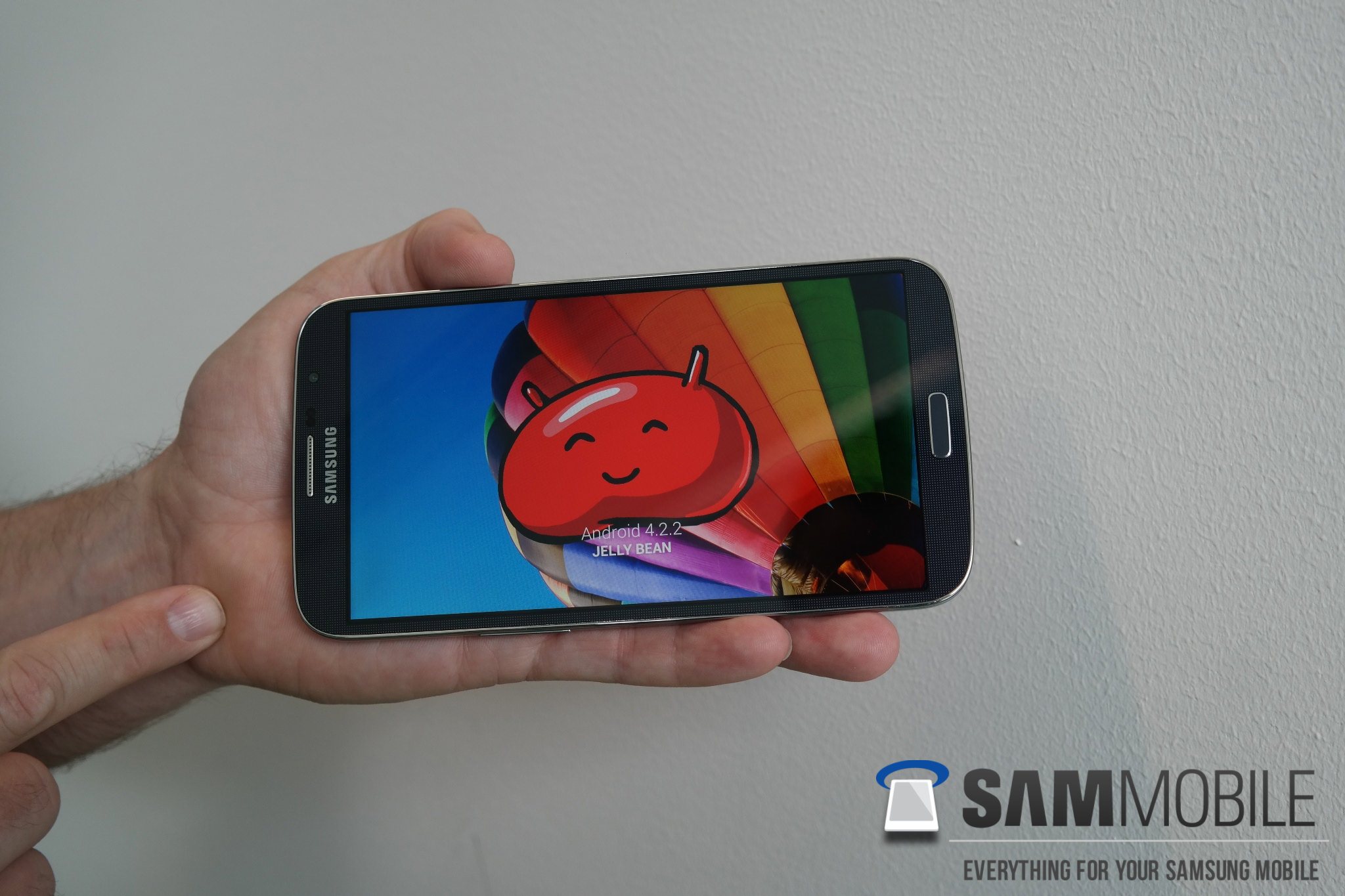