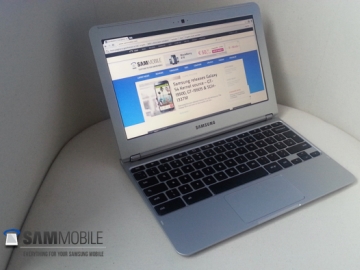 In this review we are going to take a look if the new Chromebook is worth the money and if its capable to use it for your daily tasks! Design:
Looking at the new Chromebook you’ll immediately notice that Samsung and Google has taken the safe side with designing the product, since it doesn’t stand out from other laptops. This is not directly a problem, infact we can understand Samsung and Google’s decision because they positioned it more as a mainstream product and to be honest we really liked the thin and lightweight design and also the smooth and curved edges are quite nice. Its also has good ergonomics and its easy to carry around, just like you would expect from an ultra portable product.

We are also pleased with the built quality especially for its price its sturdy and well made, even when it is made entirely out of plastic.

The only thing which we didn’t like is the kind of odd placement of the 2 x USB ports and the HDMI port on the back. If you want to plug in an USB device you have to turn the Chromebook before you can insert it. Operating System and Apps:
The Chromebook is running on Google’s Chrome OS (latest version). In 2009 Google announced their new Chrome OS which has a different approach than Mac OSX or Windows for computers. Chrome OS is running the Google Chrome browser on top of a Linux kernel and the idea behind this philosophy is cloud computing and simplicity for the end users, because the user doesn’t have to worried about saving his data since this will all be done automatically in the cloud. The whole idea of Chrome OS is also based on web applications, since its not possible to use native apps. In the Chrome Web Store you can ‘download’ your webapps which are basically just shortcuts in your app drawer. Updating and protecting your Chromebook against virussen is also not needed since updating is managed by the OS itself, it will always check for the latest available version and it has built-in security to make sure that the users can safely use their Chromebook. Google claimed that Chrome OS would be the most secure consumer operating system.

Since its basically it is just a web browser you’ll also notice that the booting times are in some way extremely fast, comparing with Mac or Windows computers and thanks to Samsung’s fast booting technology you are able to use your Chromebook in just 10 seconds after a cold boot.

On the Chromebook you won’t find any Samsung software, the only software features you will find are all coming from Google. Google has ‘preloaded’ the Chromebook with several own services like Maps, Gmail, YouTube, Drive, Music (depends in which country you are) and of course Chrome. All of these services have the same interface which most of you already know when you are using these services on your pc. We hoped that Google would use a more modern user interface for some of their services especially in Maps and Gmail. The standard interface gets the job done but since this is Google’s way to use a pc we hoped for something more. We still have to say that we like the user interface of Chrome OS, which is clean and have some nifty UI elements. All multimedia apps like photo viewer, video player and music player are really basic, this means that you don’t have any settings, so no repeat option or subtitle support.

The photo viewer is not the fastest when loading photo’s but it gets the job done. Unfortunately Google didn’t implemented any multi-touch gestures so you can’t use pinch-to-zoom and you can’t flick fast through your photo’s but instead you’ll have to use the standard zooming controls and scrolling option.

The video player plays MP4 and AVI files, but we noticed lots of dropping frames when watching an AVI file even in non-hd. With MP4 files it handles it much better but still we noticed some frame drops. We have to say that the Chromebook is handling 1080p YouTube videos just fine the most of the time.

The music player plays MP3 and M4A files fine without any issues, its shows a small album and some music controls options but thats all.

Overall we hope that Google will improve the interfaces of these apps and that they also will extended the features in the near future. Chrome OS also has a file browser which has a clean and simple interface, you only have access to 3 sections like: Downloads (where downloads are stored on the 16 GB onboard storage), Drive and an optional SD card. You have the option to view your files in a listview or a thumbnail view. Scrolling through your files is not fast in fact its quite slow, if you want to search through your files then we suggest you to use the search box. Performance:
During the time we tested the Chromebook we have to say that it has surprised us how powerful this little machine is, especially if you keep in mind that its just powered by an ARM Exynos 5 Dual Core processor.

With general usage its delivers a quite smooth experience, but we noticed that the performance is not consistent, in some occasions its fast and smooth but sometimes its slow and jerky (depends on the usage of the machine).

We also liked the Camera app where you can use real time layers which works really well without any performance issues, you’ll directly noticed the power of the Exynos processor.

Samsung and Google are claiming that you can use the Chromebook for 6.5 hours and normally you have to take these claims with a pinch of salt but we have to say that Samsung and Google were quite right! We did several tests, with browsing the internet, watching offline video and YouTube videos and hours of playing music. Most of the time we got about 6 till 6.15 hours of usage. As with most laptops we also noticed that playing videos (especially offline) is really draining the battery.

The keyboard and trackpad are really a joy to use. The keyboard works fine, all keys are easy to press and you get a nice clicky response when typing. We also liked the Chrome OS specific keys like some controls keys but also a task switching option and a window maximizer option.

The trackpad is made of plastic but has a smooth finished and it works pretty good. It easily recognizes some gestures like click-to-drag and 2 finger scroll. We only noticed that it have some difficulties with recognizing a 2 finger click which should be working as a right click, but we assume Google and Samsung can solve this with a software update.

Conclusion:
We have used the Chromebook for some while now and we have to say we liked using it even knowing its shortcomings! Its slim and lightweight easy to carry around. We’re also pleased with the excellent keyboard and the matte screen (so less to no reflections in sunlight).

But can we recommend to buy the Chromebook? Well that is depending on how you are going to use it and what are your expectations. If you want to use it mostly outside keep in mind that you can’t use all features of the Chromebook since you just have a few offline apps and you have limited storage built-in. If you are expecting that the Chromebook can replace your desktop as a powerhouse for video editing of photo editing, then we can say directly that you have to consider other options. Since the Chromebook isn’t ready for these tasks and is not that powerful enough for heavy editing work. In the webstore you’ll find some editing apps but these are just for some lightweight editing work.

We would recommend the Chromebook for users who are looking to buy an extra productivity device. Who can live with the limitations of the Chrome OS. We also believe that the Chromebook can be interesting for people who are considering to buy a tablet. If you want to have the portability of a tablet and want’s to use for more, than we can advise you to take a look at the Chromebook especially with the bargain price tag it’s an interesting product.

Even that we liked using the Chromebook there is still room for improvements. We didn’t like the placements of the ports on the back side. Since you have to turn the Chromebook before you can plug-in any devices.

Software wise we would like to see a more cleaner and modern user interface in some Google services like Maps and Gmail. The current interface is not bad but it looks more outdated.

And last but not least the multimedia functionality and play back is really bad. You don’t have any settings and features wise it’s lacking some implementations that most operating systems nowadays supports. Offline video playback is nothing to write home about unfortunately. But most of these drawbacks can be fixed by Google with a software update. Google already working on Android 12.1 as we wait for Android 12?