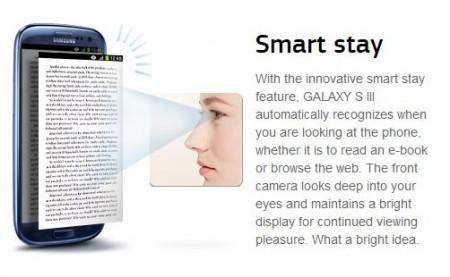 In May last year, Samsung announced the Galaxy SIII with a whole lot of new new features. One of these new features is “Smart Stay”: the front camera detects if you have your eyes open and prevents the screen from turning off. New trademark names confirm that Samsung is working on doing more with the front camera. “Eye Pause” and “Eye Scroll” are new features from Samsung. What that name refers to exactly is still open to interpretation, but it would seem that the front camera looks at your eyes to work out when the text on the page needs to scroll up or down.

Of course, the question is, “When are we going to see this in our smartphones?!”. We don’t know exactly, but we know that Samsung announces a new version of their Touch-Wiz UI every year. These features seem to follow in the flow of the Touch-wiz Nature UI which was launched in conjunction with the Galaxy SIII.Perhaps we will see these new features launched with the Galaxy SIV? What do you think? Would a feature like this be useful?