All recent market analysis reports show how COVID-19 has affected economies and smartphone sales worldwide. Yesterday, it was revealed that Samsung’s smartphone market share dropped by a whopping 60 percent in India during Q2 2020. However, things are not as bad in the US. A new report shows that the South Korean smartphone firm’s sales have dropped but not as much as its rivals.

According to the latest numbers compiled by market research firm Counterpoint Research, Samsung’s smartphone sales dropped 10 percent in the US during the second quarter of this year when compared to the numbers from Q2 2019. Rival firms Apple, LG, OnePlus, and Motorola showcased much lower sales. Apple’s sales dropped by 23 percent, while LG showcased a drop of 35 percent in smartphone sales.

OnePlus, Motorola, and ZTE were the biggest losers in the US market, showcasing drops of a whopping 60%, 62%, and 68%, respectively. The report states that most of this sales drop happened from mid-March to mid-April when most of the retail stores were closed due to the COVID-19 related lockdown. Smartphone sales in May and June actually grew week-on-week.

The report claims that Samsung saw 38 percent fewer Galaxy S20 activations during Q2 2020 when compared to Galaxy S10 activation numbers from Q2 2019. The company will start selling the Galaxy Note 20 and the Galaxy Z Flip 5G starting next month, which could improve sales figures. However, looking at the number of rising COVID-19 cases and deaths, no one can be sure as to what the market could look like later this year. 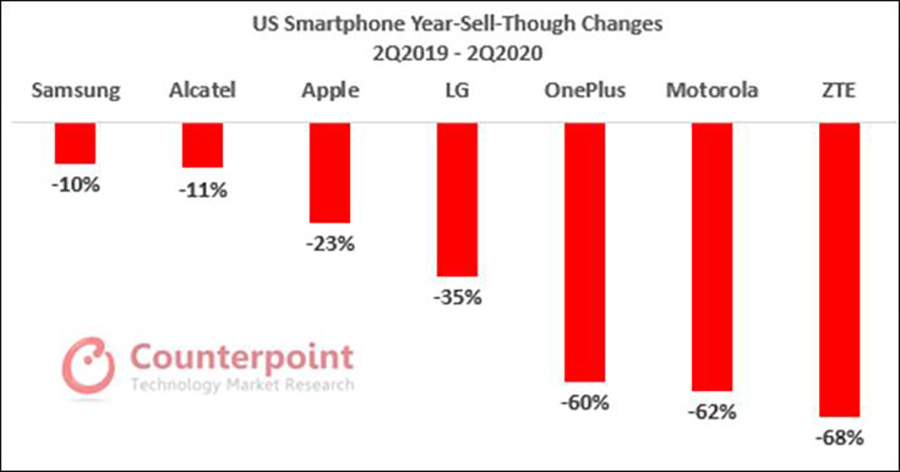