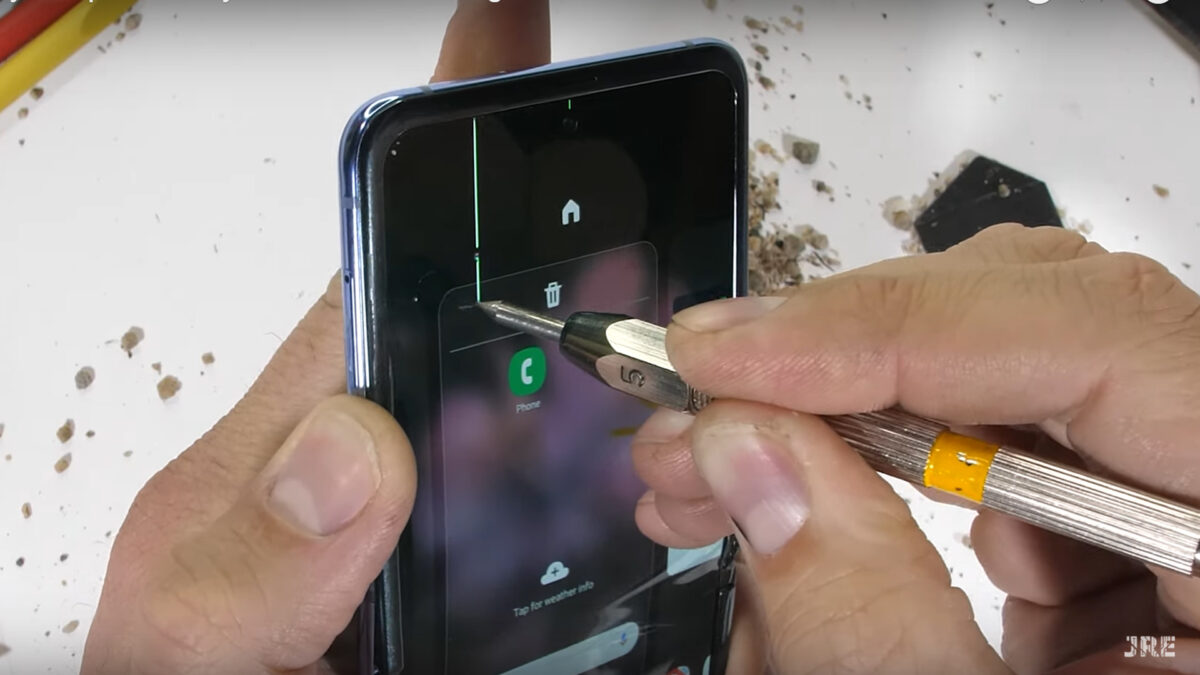 Samsung unveiled its second foldable smartphone, the Galaxy Z Flip, last week with new-gained confidence and promises of important breakthroughs in material sciences. It claimed that its new phone features the Ultra Thin Glass (UTG), a flexible protective glass layer to save the foldable screen from scratches. Now, those claims have been put to the test, and the results aren’t looking pretty.

YouTuber Zack Nelson, also known as JerryRigEverything, has published a video that shows him testing the durability of the Galaxy Z Flip’s screen and body. As usual, he starts the screen durability test by scratching it using various Mohs hardness picks.

Most modern smartphones that use Gorilla Glass or other screen protection solutions start showing permanent scratches at level 6, which then deepen at level 7. The Galaxy Z Flip, however, starts showing permanent damage at level 2, with deeper grooves beginning to appear at level 3. This puts the Ultra Thin Glass at the same durability level as the plastic protection on the Galaxy Fold and Motorola’s new RAZR.

Towards the end of the video, the YouTuber pokes holes into the Galaxy Z Flip’s screen, causing the pixels to go crazy and stop working. The Ultra Thin Glass doesn’t show any sign of fracture, though, and there aren’t any irregular bumps and lumps that we’ve seen on other foldable smartphones.

Nelson thinks that Samsung could be using a hybrid plastic polymer with microscopic bits of glass mixed in it so that it can advertise the protective layer as glass. The YouTuber concludes the video saying that “the screen is in now way scratch-resistant.”

In response to the video and a related story on The Verge, the South Korean smartphone giant sent an official statement to the publication:

“Galaxy Z Flip features an Infinity Flex Display with Samsung’s Ultra Thin Glass (UTG) to deliver a sleek, premium look and offer an immersive viewing experience. Samsung’s first-of-its-kind UTG technology is different from other Galaxy flagship devices. While the display does bend, it should be handled with care. Also, Galaxy Z Flip has a protective layer on top of the UTG similar to Galaxy Fold.”

As per Samsung’s statement, there’s a plastic protective layer on top of the company’s proprietary glass technology. Does this mean the scratches that we see in the video are only affecting the outer layer? Is the Ultra Thin Glass really glass? Was it all marketing hype and no truth?

Received my Samsung Galaxy Z Flip just now. Opened the box. Removed the protective/instruction film. Flipped the phone as you would do since it’s a flip phone and this happened. I heard the crack as well. 😰 cold weather?#SamsungGalaxy #ZFlip #samsung pic.twitter.com/j8KLL2vm8d

There are a few images and videos on Twitter that put the Galaxy Z Flip’s durability into question. A buyer in the UK flipped open his brand new phone for the first time and heard it crack along the hinge. He claims that Samsung replaced his phone with a new unit within 24 hours. Another YouTuber, Quinn Nelson, also seems to have a faulty Galaxy Z Flip whose screen started squeaking within a day of being used.

Samsung says that it will offer a one-time screen replacement option (for $119) to all Galaxy Z Flip users. Buyers in the US can also get the specially-designed screen protector applied for free for one time via select UBIF (U Break I Fix) shops, Samsung-branded locations, or sending the phone to Samsung Premier Service via mail.

The company’s marketing makes it seem like the Ultra Thin Glass is as hard as glass panels on other phones. No one expects a hard folding glass, at least right now, but Samsung should be clearer in making people understand that they need to be more careful with the phone.

Would you buy the $1,380 Galaxy Z Flip even after watching this video? Let us know your thoughts.

Update: A separate teardown video by YouTube channel PBKreviews has revealed that the Galaxy Z Flip display is made of glass, but the glass is covered by a plastic layer. In short, Samsung’s claims that the Z Flip has a glass folding display are accurate, though naturally the glass is of a very brittle nature. You can check out the video below.