COVID-19 drops Samsung’s sales in Europe, boosts them in LATAM in Q1

The COVID-19 pandemic left a big mark on the smartphone market in Q1 2020. Across Europe, the segment shrunk by 7% year-on-year and 23% quarter-on-quarter. Samsung maintained the lead in Europe, but it’s smartphone sales market share dropped 2% year-on-year. Counterpoint Research highlights that Q1 is generally a slower time of the year in terms of smartphone sales, but this phenomenon was further accentuated in 2020 by the coronavirus outbreak and the lockdowns that followed.

Many European countries entered varying stages of lockdown in March, with most offline stores and businesses closing down in an effort to maintain social distancing. Italy was most-impacted in Q1 2020 in terms of smartphone sales, registering a 21% year-on-year decline. Nevertheless, Samsung had a 39% market share in Italy, the largest share in all the European countries mentioned by the market research firm in the recent analysis.

The least affected country was Russia, recording only a 1% year-on-year drop. Huawei maintained the lead in Russia with 33% market share, while Samsung was second with 19%. Across all Europe, Samsung had a 35% market share in Q1 2020 and was followed by Apple (32%) and Huawei (13%).

Smartphone sales have also dropped considerably in LATAM countries, according to the research firm. In Q1 2020, the smartphone market in Latin America registered a massive quarter-on-quarter decline from 30.1% to 20.8%.

However, Samsung was not only able to maintain its dominant position in LATAM countries, but also boosted its smartphone shipment market share from 35.4% in Q1 2019 to 37.9% a year later. Every other major smartphone brand except for Samsung and Xiaomi have had their shipment market shares drop by the end of the first quarter, in large part due to the coronavirus outbreak. 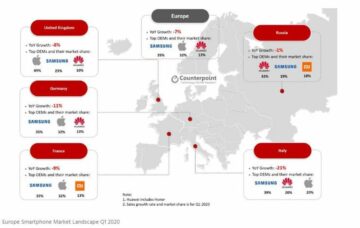 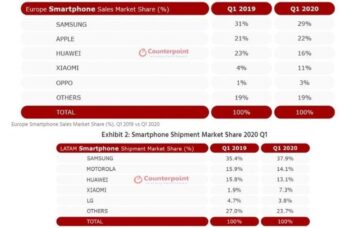