The latest update to the Samsung Internet Beta app brings a very useful feature: You can now stop websites from automatically playing videos. Autoplaying videos are perhaps one of the most irritating things about the internet today. Everyone has experienced them, and while some sites are sensible enough to keep sound muted when they autoplay videos, others aren’t. And now, if you use the Samsung Internet browser, you can make all the autoplaying videos go away with a tap.

Stops both GIFs and videos from autoplaying

Version 9.4.00.26 of Samsung Internet Beta has a universal setting called Allow autoplay videos that, once disabled, stops videos from being played automatically on all websites. It even stops GIF animations from playing, which might seem a tad overkill to some users, and hopefully Samsung will add more granular control that lets you choose if it’s just videos that don’t autoplay or if even GIF animations don’t. Or well, at least the option to tap on GIF animations to make them play would be nice, which is something that doesn’t work at the moment.

Grab the update from Galaxy Store or download the APK file

You can install the beta app from the Galaxy Store on your Galaxy device; the Google Play version is yet to be updated, but that should change in the next couple of days. Another way you can get the latest version of Samsung Internet Beta is to download the APK file from our APK section and install it on your phone manually. This is the best solution for those with a non-Samsung smartphone until the Google Play version is updated. 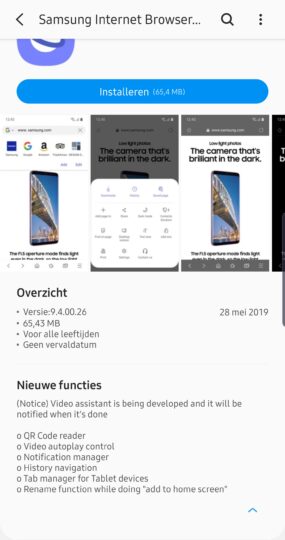 More news »
Latest Samsung Internet beta brings a couple of improvements By Adnan F.|4 weeks ago
Samsung Internet privacy and customization options are widely rolling out By Mihai M.|1 month ago
Samsung Internet bug is hijacking default browser in custom tabs By Asif S.|2 months ago
Chrome not smooth at 120Hz refresh rate on your Galaxy S20? Here’s a simple fix By Abhijeet M.|2 months ago
SamMobile Shop
Opinions More »
Samsung has nailed its smartwatch strategy and Apple knows it
2 days ago