All the way from South Korea comes a live image of the battery of Samsung’s upcoming Galaxy A60. The yet-to-be-launched phone will have a 3500mAh battery capacity. The upcoming handset will likely slot between the Galaxy A50 and the rumored Galaxy A70. Samsung will evidently be offering a full slate of premium affordable devices this year.

Some time ago, an alleged spec sheet of the Galaxy A60 leaked, giving the phone a generous 4500mAh battery. Unfortunately, new information points to a somewhat more modest capacity. The A60’s battery is pictured carrying product code EB-BA606ABU, which fits neatly with the phone’s model number SM-A606x. In the picture, we can see the battery has a typical capacity of 3500mAh and a rated capacity of 3410mAh. 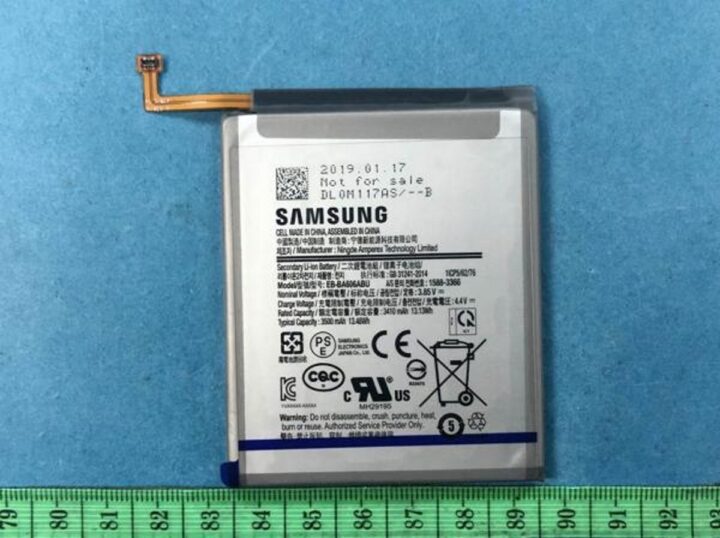 In terms of battery prowess, this places the Galaxy A60 far behind the Galaxy A50, which comes with a 4000mAh battery. It is unclear if the modest size relates in some way to the device’s other features, despite the alleged 6.7-inch display size.

Other rumored specifications of the Galaxy A60 include a 32-megapixel triple camera setup and a fingerprint sensor that is placed under the phone’s display. Reports suggest it will be powered by the Snapdragon 675 processor and will be available in 6/8GB RAM + 128GB storage configurations.

Whether these details turn out to be more accurate, remains to be seen. Also unclear is where Samsung plans to market the Galaxy A60. There is a Chinese variant being developed as the SM-A6060, but other than that, not much is certain at this moment.