Samsung has been testing the 8.2 release of its web browser since September. The company announced today that it has released the stable version of Samsung Internet 8.2. The update brings several new features in addition to improved Bixby integration.

The stable version also includes a Chromium engine update (to M63) that features JavaScript (ES6) modules, font-display CSS property and Web Assembly. There are additional tools for developers to run automated testing in the browser as well.

The Do-Not-Track preference is a major privacy-focused feature in the 8.x versions of the browser. It allows users to avoid sites from tracking them. It’s a preference that users can set in a browser to notify websites that they don’t want to be tracked.

It arrived with Samsung Internet 8.0 alongside the updated download manager. That feature allows the browser to download files faster by using multiple parallel connections. It works in a fashion similar to download accelerator programs for desktop operating systems like Windows. The company says that files larger than 13MB will download in chunks. It estimates a 15-40 percent improvement in download speed.

Samsung Internet 8.2 gets further Bixby integration. It’s now possible to use the browser with just voice commands. You can give commands like “Open Internet and search for photos of dogs” and Samsung Internet will happily comply. 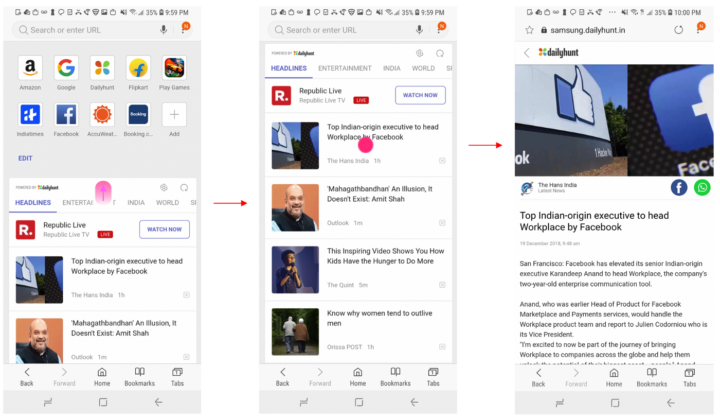