Samsung rolled out its Bixby Voice digital assistant globally a couple of months back. However, the digital assistant only has support for the English and Korean languages. Samsung did say that Bixby’s language support will eventually be expanded to Chinese before any additional languages are supported.

Samsung China has now launched a new beta test for Bixby Voice Chinese support. The beta will run until the end of this month. Participants are encouraged to use Bixby Voice frequency to help it get a better understanding of the Chinese language.

It looks like quite a lot of people in China were looking forward to trying Bixby Voice in their native language. Samsung China started recruiting participants for this beta today and all 15,000 spots have already been filled.

Since Bixby Voice is only supported on the Galaxy S8, Galaxy S8+ and the Galaxy Note 8, participants obviously need to have one of these handsets. It’s offering them incentives to provide valuable feedback.

Bixby’s gamification interface can be used to earn points. Users earn points by providing feedback that improves the digital assistant. The top 900 users with the most points will receive Samsung Points worth 100 yuan that can be transferred into payment cards like Jingdong.

The beta test will conclude on November 29 so we can expect Bixby Voice Chinese support to be launched officially soon after that. 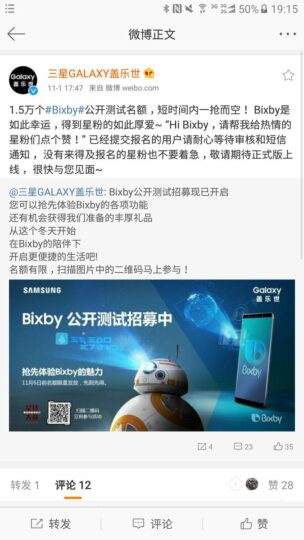 While Samsung isn’t focusing on Bixby as much as it used to during its launch events, the company is sti …

Samsung quietly began releasing a new update to its AI assistant Bixby a few weeks ago. Availability was limit …