T-Mobile started taking pre-orders for the Galaxy S8 late last month and while the handset is going to be officially launched in the United States on April 21, the carrier has said that it’s going to ship pre-order units a bit early.

It has started sending out text messages to pre-order customers in order to inform them that their orders are now being packed and that some customers may see their credit cards being charged. It also mentions that shipping will begin on April 19 prior to the handset’s official release on April 21.

This means that at least some of its customers will get the Galaxy S8 a day or even two ahead of the official release date while others will most certainly get it on April 21. This isn’t the first time that T-Mobile has done something like this. It delivered pre-orders for the Galaxy S7 a full week before the release date last year.

While it doesn’t appear to be taking such a big liberty with the Galaxy S8, it may very well be the first to put the Galaxy S8 in the hands of its customers. 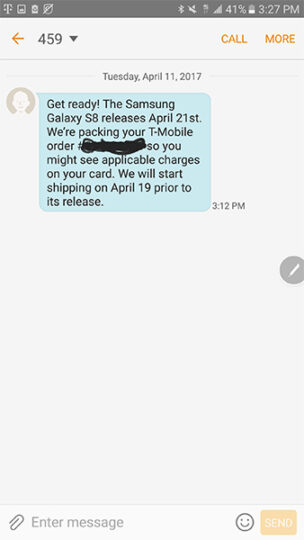