One of the reasons why people buy a smartphone unlocked and off-contract is that they want to receive firmware updates quickly since mobile carriers tend to delay updates because of the tests they run. Unlocked units also don’t have all of the bloatware that you find on carrier versions. However, many who own unlocked Galaxy smartphones in the United States have been left feeling that they’ve been handed the short end of the stick.

Jason Cipriani over at ZDNet reached out to Samsung for clarification on the company’s approach to security updates for unlocked devices in the United States. While apologizing for the inconvenience, Samsung explained that due to “various circumstances,” it has been releasing security updates for unlocked Galaxy devices in the country on a quarterly basis.

The company adds that it has now “resolved the challenges” and is now committed to releasing security updates for unlocked devices on a monthly basis. Samsung is planning to release this month’s security update for unlocked handsets soon and wants users to rest assured that the update will have all security patches to date. 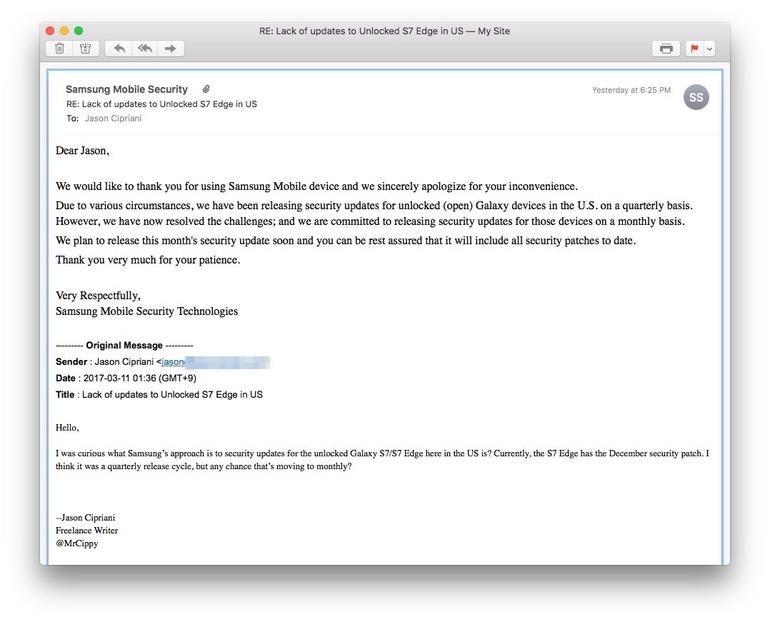 i got a carrier j5 2015, gotta say its not just getting shat on unlocked devices. i saw for example j500f gets regular monthly updates. while european model usualy skips few months overall, some regions get updates more often some less. on my device i got an update which brought me to may security patch 2016 which i got ofc 1 month late, after that next update i got was marshmallow with august patch at end of september, and after that i got another update 2 weeks ago which got me to january patch, literally at the end of february,… Read more »

Eu unlocked s7 … on December patch… they promised it with s7 too last year… monthly patches. Just don’t get your hopes up, marketing department sells you bs.

Samsung’s definition of monthly is a peculiar thing. Must be something lost in the Korean translation.

This made me laugh. The Korean language barrier is a good excuse for a lot of Samsung’s mistakes. Its better than the silence they give their customers.

Lol! Samsung really are habitual liars, their products are great but after care and support is a joke. The unlocked S6 edge+ was last to get the official Marshmallow update because my carrier was too slow on my last Galaxy! Then the carriers started getting them first. It’s ridiculous. I’m currently on January and no Nougat in sight.

Exactly! This and the shitty update support annoys me. Also different devices by regions pisses me off. I don’t want to import a device with no warranty just to get a superior model of a phone

I’m not holding my breath.

What about us, in the EU? Or the rest of the world?
See, this is my point.
Samsung said im sorry and then come with some BS like this. What about last time you said sorry, for slow updates?
Its a high end phone and a lot of business people use it. We are alot who are online with bank transfears, paypal, nfc payment etc etc. And thats why its so freaking importent to have fast and steady security patch updates….

EU is already receiving monthly Updates. Since March last year i have gotten nearly every security Patch, except for one or two.

I’ve got the S6. I was getting regularly patches until they started preparing Nougat. That’s not the way to do security patches. Samsung is a multi-billion corporation, not a bunch of geeks in a basement doing thing out of the love of their hearts. They need to get security right.

Well, look here. They miss 4 months ( 5 with Feb 2017 security patch ). So i dont know where you got your phone from. But its not an UK BTU.
https://www.sammobile.com/firmwares/database/SM-G930F/BTU/

Well, i don t know where you got your phone from og what software. But the UK BTU misses 5 security updates.
Pleace research befor you claim its all alright in EU 😉
Its NOT!

If security is your top priority then go for iOS or Balckberry. Monthly update will not save you even 85% from seriıus hackers.