Samsung appears to have multiple visions of what a TV of the future should be capable of. Not long after we saw one of the company’s patents detail a scrollable TV, we’re now seeing another patent revealing that Samsung has dreamt of a holographic TV that’s going to take the baton forward from conventional 3D TVs which weren’t really well received by customers. This new patent application by Samsung was published by the US Patent and Trademark Office earlier this month.

Samsung goes to great lengths in the patent to describe some of the issues with the conventional 3D TVs, explaining that most of them use a method called binocular parallax which makes it difficult to increase the number of viewpoints. It also makes the user feel more tired as there is a difference between the depth perceived by the brain and focus of the eyes. It then adds that holographic display methods which provide full parallax by making the depth perceived by the brain consistent with the focus of the eyes have gradually been put to use.

The patent goes into much detail to explain precisely what components will be required to power this holographic TV. It may even include an eye tracking unit to track the pupil location of the viewer. The TV will basically provide a glasses-free 3D experience by relying on holographic technology to make the images pop and provide an immersive viewing experience.

Samsung filed for this patent with the United States Patent and Trademark Office back in January this year, it has just now been published. It’s not necessary for all patented ideas to see the light of day so it can’t really be said for sure right now if Samsung really is going to come out with a holographic TV at some point in time. 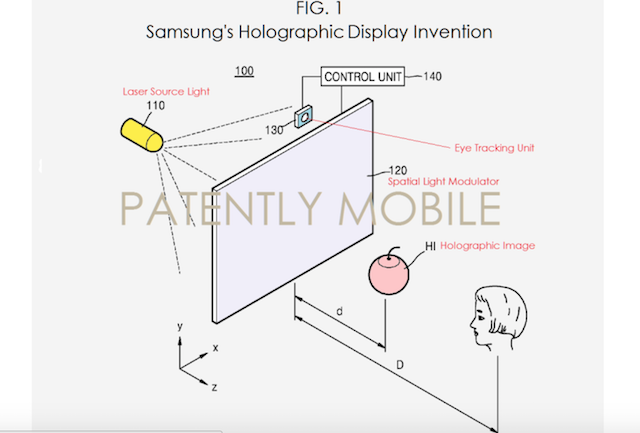